Artist Chris Cole has spent his life exploring the relationship between two disparate worlds: machines and nature. To marry his two obsessions, Cole sculpts creatures with salvaged metal parts. Fish, birds, and reptiles have their defining features cut and formed in an industrial style that recalls the Steampunk movement’s fantastical mechanization. Each of Cole’s sculptures feature moving parts. Birds gracefully flap their wings while fish swish their fins as if they’re navigating through treacherous water. These exquisite, fluid movements highlight the artist’s interest with functionality and aesthetics. “Understanding physics, and the way things work,” Cole explains, “has always been a fascination of mine.” To create his contemporary works, Cole looks back to the 19th century. “My sculptures are heavily influenced by the visionaries of the Industrial Revolution,” he writes. “The quest for flight, the ceaseless desire for faster, more versatile and efficient transportation relied undeniably on the workings of the natural world.” Although he has a reverence for these advances, Cole fears we’ve become too disconnected with Mother Nature. “My work, therefore, considers a regression from mechanism back to organism.” It also serves as a reminder of what we miss while we sit inside with our devices – instead of looking at a bird on the screen, we could walk outside and see the fluttering of one in real life.

We’ve already shown you amazing steampunk sculptures by the artist from Lithuania – Arturas. And to day we want to show a few more. “I immersed into the new type…
View Post 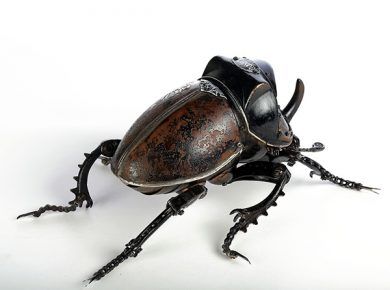 To get these stunning insect sculptures French artist Edouard Martinet uses part of a car, bicycle, umbrella, compass, typewriter, clock, compass and much more. The artist does not solder or…
View Post 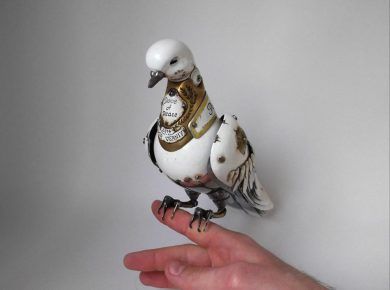 From heaps of scrap metal, old bike chains, and silverware, Russian metal artist and steampunk sculptor Igor Verniy creates birds, butterflies, and other unusual creations. Many of his steampunk and…
View Post

Steampunk style is still popular in the art and is the great demand with the public. Today we’re happy to show you amazing steampunk art by the artist from Lithuania…
View Post