The S4R has got to be one of Ducati’s greatest hits. The water-cooled Monster used a retuned DOHC 996 engine with eight valves and a stout 113 hp, weighed just 425 pounds (193 kilos) dry, and sported a single-sided swingarm. And it was good for over 145 mph (235 kph). The S4R can still hold its own against many modern roadsters, but it was launched 16 years ago – and tired examples are now popping up on the secondhand scene. Which makes it an ideal base for a custom build, as the Dutch shop Moto Adonis has just discovered.

Shop founder Daan Borsje has delivered a most unusual custom, with radical styling that doesn’t slot into any obvious genre. It’s in-your-face and unapologetic, much like the S4R itself. “My loyal customer and friend Stijn Van Horick came to me with the desire to own a one-off, futuristic cafe racer,” says Daan. “I also had a desire: to build a custom based on one of the most brutal and best steering motorcycles I have ever ridden, the Ducati S4R.”

“We started with a wish list as big as a Harry Potter book, and narrowed it down—still a way too long list of stuff we wanted on the bike.”

Stijn recalls the brief: “It needed to be brutal, slick, and with a nice ‘flow.’ A unique bike. I’ve always liked Ducati, and it was cool that Daan had the same idea. It was the first Ducati that Moto Adonis would build.”

In the Roosendaal workshop, Daan and Stijn started drawing. They took inspiration from not only bikes, but also cars and even whales (yes, that gas tank). The sketches went into Photoshop, and with the concept locked down, the mechanical work was ready to begin. After stripping the S4R down to the essentials, Daan called in a little help from his friends and reconfigured the upper frame to hold the tank-and-seat combination.

“Somehow, it was still missing something,” says Daan. “So we gave the front end extra room for electrical parts and lights.” That includes fork covers as well as the striking louvered nacelle. “The top [circular] lights are for long dark roads, and the bottom [strip] lights are for the streets of Antwerp—where this bike lives,” says Daan.

Underneath the swooping tank is a new air box, a battery holder, and a mounting point for a Motogadget m.unit blue control box.

The 43mm USD Showa forks on the S4R are superb, so Daan has wisely left them alone—aside from refinishing and shortening them slightly. At the rear, he’s upgraded the Showa monoshock to a new Wilbers unit with a black and gold finish.

The brakes have been upgraded too, with wave disks from the Dutch company Moto-Master. And the 17-inch wheels have been swapped out for sweet Kineo rims.

The radiator was tricky. “It had to be removed because it was way too big,” says Daan. “So we redesigned and re-engineered the radiator to be as small as possible.”

Daan has treated the bars to new Nissin brake and clutch pumps, and Motone push-button switches send signals to the Motogadget m.unit. At the bar ends are Motogadget m.Blaze Cone turn signals, and there’s a Motogadget Motoscope Pro digital gauge flushed into the modified top yoke.

In the end it just needed one more tweak: a monstrous exhaust system. Daan has a sub-brand called MAD Exhaust, focusing on Harley, BMW and Yamaha systems, and he whipped up custom pipework to add a little extra power and style to the S4R.

The paint is Audi’s iconic Nardo Grey, one of the most famous colors of modern automotive times. At Stijn’s behest, there’s gold leaf on the fork covers spelling out DUC92.

“I give my cars and bikes names,” says Stijn. “This bike needed the name DUC92—because 1992 was the year the Monster was introduced.”

It’s a polarizing build, but whether or not you like the styling, Daan and Stijn have to be applauded for pushing the aesthetic envelope—and tackling the challenges along the way. “It was hell to build this bike,” Daan admits. “But on the first ride, when I hit the throttle…there was nothing better than that feeling. Except perhaps the look on Stijn’s face when he did the same thing!” Don’t forget to check 10 fastest motorcycles in the world. 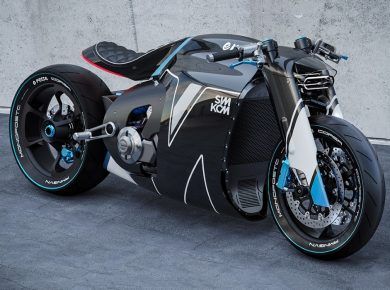 Designed as a passion-project and personal concept, the Ducati è rossa comes at a perfect time, as the company’s CEO reveals that they’re working on an electric motorbike of their…
View Post 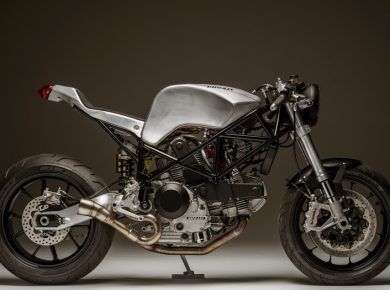 Clay Rathburn of Atom Bomb Custom Motorcycles transformed 1996 Ducati 900SS into a serious streetfighter. “I guess this project was about building the right home for a fantastic engine, and…
View Post

This custom build of a 1997 Ducati 900SS SP J63 was done by Revival Cycles, an impressive workshop based in Austin, Texas. The resulting motorcycle is lightweight and linear with…
View Post

Ducati have presented their new versatile sports bike, the Ducati SuperSport, a bike that is sporty yet appropriate for commuting and touring. The sportbike is aimed at everyday riders, it…
View Post