Officina Armare, an acclaimed Milan-based yacht design studio, recently unveiled a new incredible superboat concept, inspired by Lamborghinis. Called A43, this stunning boat could take your breath away even from these photos, but the looks aren’t the only thing that resembles the legendary car brand.

The A43 can also reach mind boggling speeds of more than 80 knots (unfortunately it doesn’t make it one of the world’s fastest speedboats), with an impressive cruising speed of 50 knots. So it’s definitely like a Lamborghini on water. The boat’s design features the same aggressive lines, with an ultra light carbon fiber body that will be powered by two Mercury engines with a power output of 540 hp each. The engines are connected Caterpillar Three60 pod drives.

The steering wheel, the throttle control and the joystick for docking maneuvers are all made from carbon fiber as well. The superb Blu Nila color, together with the ravishing performances of this boat and its sharp looks, complete the Lamborghini genes. Other features worth mentioning are the side ventilation intakes on the engines that also draw inspo from Lamborghini.

But this boat is not all good looks and radical performances. The cabin of the A43 comes with enough amenities for one or two comfy nights on the boat. There’s a bathroom with shower, a microwave and refrigerator, plus a coffee machine. The sofa and dining table can accommodate four people and air conditioning isn’t missing as well.

The Officina Armare A43 can even transport a pair of Seabobs, bicycles, surfboards, a mobile swimming platform or a small tender. Do you like a Lamborghini-inspired boats? 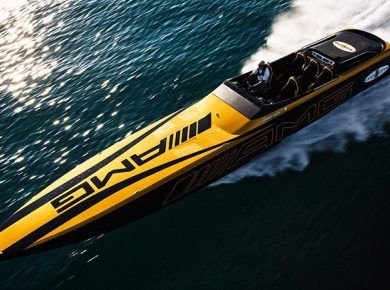 Human obsession with speed goes back to the time when man first invented the wheel. Humans have been known to have a love for speeding since time immortal. In ancient…
View Post