Today we want to show you a sleek Racer Fourteen by designer Ahmed Ghamloush. This stretched out supercar looks like the offspring of a Lotus 2 Eleven and a BAC Mono. Like the Lotus, it’s got a predominantly flat hood, full fender body coverings and exaggerated wheel arches. Like the Mono, however, it sports a central, open-air seat for one driver tucked neatly in front of a dramatic overhead scoop. Despite being a concept, its form is almost more believable than the previously mentioned supercars. According to the designer, its realism is a result of soft fluid-like surfacing interrupted only by scoops, antennas, and venting. In contrast with its bold curves and body shape, details like LED headlights/taillights and air intakes are minimalist touches that keep focus on the overall form. And also you can check other concept cars.

Check made in Detroit the Falcon F7. A super lightweight monocoque chassis built from aluminum, carbon fiber, and Kevlar combines with a Lingenfelter-built twin turbo V8 pumping out 1,100hp to…
View Post 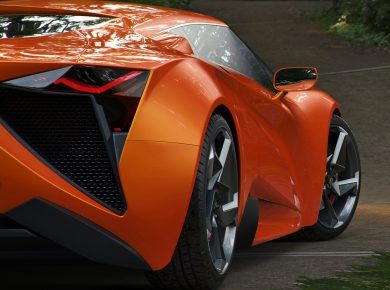 Industrial designer from Bishkek, Kyrgyzstan Steel Drake has come up with impressive supercar design called Vensepto. The design was inspired by Lamborghini and also inspired by works and sketches by…
View Post