This Tesla SpaceX Semi-Truck concept was created by automotive designer Alex Baldini Imnadze. The SpaceTruck is a concept created as a dream collaboration between Tesla and SpaceX. Unlike Tesla’s original semi-truck, the SpaceTruck is more situation-specific, designed to transport rocket parts and the Dragon crew around and between facilities.

Citing Syd Mead as his primary source of inspiration, Baldini says the SpaceTruck was created as an effort to embrace “Astro-design”, creating a vehicle that visually represented the space-age we’re currently in. The SpaceTruck’s design language mimics the Dragon Crew Capsule, with a similar white and black color-combination. Needless to say the truck is entirely powered by an electric drive-train, and features a cockpit that sits above all the machinery, jutting out too, to slightly resemble the SpaceX astronaut helmet. Unusually shaped doors allow you to enter and exit the cockpit, while it would be pretty safe to assume that the vehicle does come with some level of autonomy too. The SpaceTruck concept’s wheels boast of a rim-design inspired by the Dragon Crew Capsule too.

A pretty low ground-clearance indicates that the SpaceTruck is made for mostly in-facility transport, allowing crew to get from place to place, while also allowing crucial parts to be transported within different wings of the facility. Looks great, eh?! Also be sure to check concept cars of largest automakers.

Much is said about the emergence of autonomous cars on our streets, but enclosed areas like ports, factories and corporate campuses may well be where they are put to work…
View Post 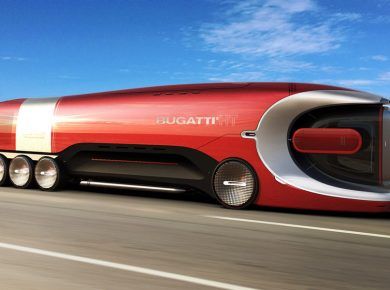