Jaquet Droz is the master of specil art – you can check Magic Lotus Automation to see their masterpice. Their latest automaton timepieceis the Loving Butterfly Automaton. Created in a limited edition of 28 pieces, this poetic timepiece is characterized by a centerpiece crafted from an exquisite mineral dial.

Set against a backdrop of a forest of gold, this precious dial is made from wood petrified 140-180 million years ago called Chinchilla Red, named after the far-eastern locale in Australia where it is found. It was formed by fir trees covered in volcanic ash that were swept away by lava.

To make the surface of this rare mineral perfectly smooth, many hours of manual work of an expert craftsman are required. The resulting pattern of the mineral dial is like no other, making each of these 28 timepieces truly unique.

The representation is inspired by a drawing titled “Le papillon conduit par l’amour (Butterfly Driven by Love), which was sketched in 1774 by The Draughtsman, an automaton created by Henri-Louis Jaquet-Droz.

The scene is brought to life with striking realism thanks to the crown-push button triggering mechanism that moves the animated chariot wheel and wings (make sure to watch the video at the end of the article). Multiple levels lend the piece a depth of perspective that invites discovery. The scene unfolds on a stage of nature with a set that actually rises up all around the dial. The butterfly’s wings flutter in time, placed close against the sapphire crystal to make it seem like the butterfly is about to break. The wheels on the chariot turn, but not all of the spokes rotate, which creates an optical illusion that Pierre Jaquet-Droz began using nearly three centuries ago.

The autumnal hues of the stone nicely blend with the warmth of the 18-carat red gold. The time is displayed on the off-centered black onyx dial with red gold hands. The 43 mm round case houses the Jaquet Droz 2653 AT1 self-winding mechanical movement equipped with a silicon escapement unaffected by magnetic fields. Beating at 28,800 vibrations per hour, this movement features a double barrel delivering 68 hours of power reserve. The beautiful finishes and the 22-karat red gold oscillating weight are visible through the transparent sapphire crystal case back.

Part of the sales from the Loving Butterfly Chinchilla Red automaton will be donated to Australian associations dedicated to reforestation and the preservation of endemic species such as “Plant a Tree for Me” or “One Tree Planted”, especially important after the fires that have recently devastated Australia, the country where the Chinchilla Red mineral was found. Matched to a rolled-edge hand-made black alligator with a red gold folding clasp, the Jaquet Droz Loving Butterfly Automaton Chinchilla Red has a price of Euro 130,800. Also you might be interested in 10 expensive wrist watches in the world or other unique watches. 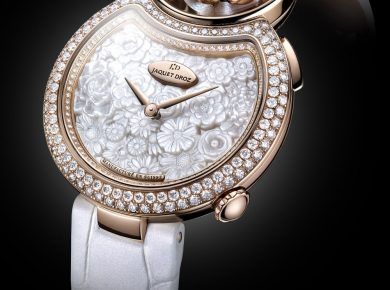 Jaquet Droz has presented two new models of its Lady 8 Flower, that was first unveiled in 2015 and represented the very first Automaton collection fully dedicated to women. Handcrafted…
View Post