The RM 57-03 Tourbillon Sapphire Dragon is the culmination of one of the Richard Mille‘s beloved special projects. In an unprecedented feat, an artistic creation in sapphire and gold has been incorporated within a tourbillon movement, requiring that the complex procedure of sapphire machining be combined with the delicate and poetic art of engraving. It is the this bold approach of bringing together seemingly unrelated worlds that brings Richard Mille its repute.

The dragon, a mythical animal arising from an ancestral imaginary world and indissociable from Oriental culture, has multiple meanings. Here, it is a symbol of perseverance and success as well as of the power and strength that make it a master of the elements. This notion of robustness and reassuring solidity, visible in the bearing of the dragon that firmly encircles the manually-wound tourbillon calibre, dictated the creative process followed by the engravers at Olivier Vaucher—a major name in engraving in Geneva—working in collaboration with the Richard Mille movement and exterior engineers on this complex endeavour.

As a fantastical creature moving through the water, the dragon harmoniously encapsulates the Yin of sapphire, associated with the liquid element, and the Yang of gold, which carries the opposing heat and positive connotations of the Sun.

Sapphire has a special place at Richard Mille, which uses this material to craft the most complex cases and movement components.

To engrave the dragon, Olivier Vaucher and his teams developed new hand-polishing and finishing techniques to enhance the natural transparency of the sapphire. The head and feet in carved red gold also serve to accentuate the crystalline texture of the sapphire and the volume of the subject. The minute details of the scales were the result of a long and delicate process of painting with gold, while applying these to the dragon’s tongue and eyes—giving it a determined look—added a final artistic dimension to the piece.

The extreme skeletonisation of the grade-5 titanium RM57-03 calibre clearly reveals the minimalist baseplate to create a new perspective of the movement and its gears.

The RM 57-03 Tourbillon Sapphire Dragon is a natural addition to the collection with its combination of tried-and-tested traditional techniques and technical innovation. Only available in Asia, the RM 57-03 is produced in a limited edition of 55 pieces, 5 of which in a sapphire case. Also be sure to check TOP 25 luxury watches for men.

While many of his movie characters are known for their sheer physical prowess and power of will, Sylvester Stallone is actually quite a bit more refined. In fact, he’s a…
View Post

After the partnership with McLaren F1, which produced the RM 50-03 last year, Richard Mille is now presenting the first timepiece developed in collaboration with McLaren Automotive, the RM 11-03…
View Post 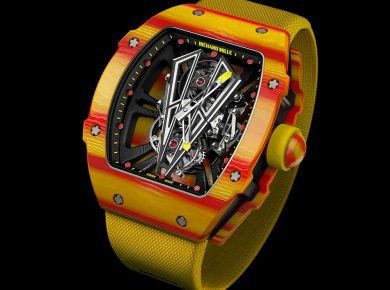 Richard Mille has released the limited edition RM 27-03, with a new caliber that features a new tourbillon for Rafael Nadal. The tennis star and the lightweight luxury watch brand…
View Post