Polish architectural designer Bartosz Domiczek (previously here) envisions the Henge Hill House, a residential intervention built atop the footprints of an historic farm storage building. The ruinous shell of the original structure, defined by its radial plan and sweeping arcade, serves as the foundation within which the contemporary residential programming is inserted. The project monumentally faces outward toward the distant, sloping olive groves, expressing the rusticated stone materiality of the sweeping, arcaded facade. this shell is imagined to be partially restored and used as an anchor for the newly organized collection of rooms within.

An architectural designed and visualizer, Bartosz Domiczek imagines the Henge Hill House with a hybridized material palette that is both rusticated and modern. The near-derelict wall of the historic arcade divides and frames views outward, recalling the atmosphere of a found ruin. The sweeping, curved corridor between the new interior and the pre-existing shell serves to cinematically reveal the landscape as the occupant passes by. This interstitial space is defined by the structural separation of the dwelling’s two defining elements, and continues around a small central courtyard to extend further beneath the excavated slope to provide the supporting utility areas. 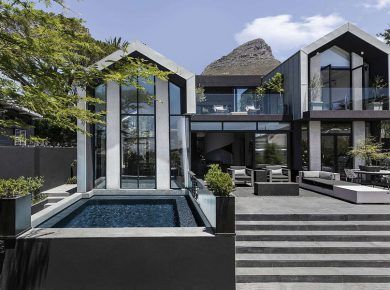 Designed in 2018 by Renato Graca, this contemporary single family house is located in Cape Town, South Africa. The brief to the architects was to create a simple traditionally inspired…
View Post 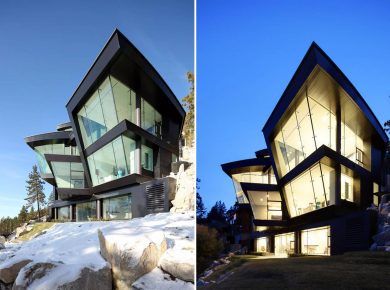 Following the slope, the light-flooded residential “CoMED” building develops in a crystalline, conspicuous shape. Similar to a ski jumping facility, the Residential as a compact living space sits on the…
View Post

Some cars, like the Maserati GranTurismo, are considered a work of art. So rather than lock away their ride in a dingy garage, a couple in Japan wanted to display…
View Post

On a privileged plot with a steep slope, Fran Silvestre Arquitectos has designed an all-white dwelling that negotiates the dramatic change in topography. Titled ‘House in Benahavís’, the property is…
View Post