In the wake of the devastating fire that ravaged Paris’ Notre Dame Cathedral, a number of architects and designers have presented proposals suggesting how the church could be rebuilt. The response of paris-based architect Vincent Callebaut seeks to bring science, art, and spirituality together. Inspired by biomimicry, the design hopes to establish a fairer symbiotic relationship between humans and nature.

Titled “Palingenesis”, a name derived from the greek word for “rebirth”, Vincent Callebaut’s design aims to unite the cathedral’s nave, roof, and new spire. From the four gables, the original geometry of the 10-meter-high attic has been respected. Meanwhile, the building’s triangular section and steep 55-degree pitched roofs gradually stretch to shape a vertical spire.

Constructed with cross laminated timber beams pre-stressed with carbon fiber slats, the new oak frame seeks to use the minimum amount of material to ensure a low-carbon footprint while offering the greatest transparency. “Transparency, sharing, and openness to our society’s development: such are the ideas conveyed by this new, diaphanous forest of Notre Dame, outlining the new face of the church in the 21st century,” Callebaut explains.

The cathedral’s restoration would transform it into a positive energy building that produces more energy than it consumes. The contemporary, three-dimensional gothic stained glass roof produces all the electricity, heat, and passive ventilation that the cathedral might require by combining passive systems and advanced renewable energies.

The new wooden frame is covered with a three-dimensional crystal glass canopy subdivided into faceted diamond-shaped elements. These crystals consist of an organic active layer, made of carbon, hydrogen, nitrogen and oxygen, which absorbs light and transforms it into power. This energy, stored in hydrogen fuel cells, will be directly redistributed throughout the cathedral. To avoid any greenhouse effect, the structure’s crystalline scales open to allow a natural air flow towards the top of the spire which mimics a wind powered chimney.

Devoted to contemplation and meditation, the project features a garden cultivated by volunteers and charitable associations to help the most deprived and homeless parisians. Callebaut estimates that up to 21 tons of fruits and vegetables could be harvested and directly redistributed for free each year, with a weekly farmers’ market held on the cathedral’s forecourt. Also if you want you can check another creative project – Cathedral Fold. 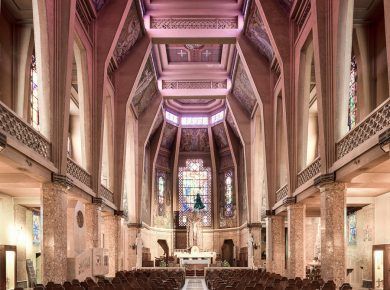 Architect Vincent Callebaut has designed a floating ferry terminal for Seoul with a form that references the hyperbolic geometry of a Manta Ray. Suspended above the marina and adjacent gardens,…
View Post