Heatherwick Studio, the London-based design and architecture firm led by Thomas Heatherwick, has revealed plans for a giant “planted pergola” that will form the focal point of Tokyo’s redeveloped “Toranomon-Azabudai” district. The studio has designed the public realm and lower-level podium architecture, landscaping, and retail for the site, which includes a public square that measures 6,000 square meters (64,583 square feet). the scheme also includes a mix of offices, residences, and retail outlets, as well as a school and a temple.

Heatherwick Studio sought to unite the site with an identity particular to Tokyo. Working with a complicated, irregularly-shaped plot, the design team devised a scaled up pergola-like system to organize and unify the development’s many different elements. “This concept has allowed us to bring an overarching logic to an eight-hectare piece of tokyo whilst also making space for facilities such as housing, shops, hotels, spas, a school and a temple within the sections framed by the grid,” explains Thomas Heatherwick.

The undulating structure rises like a gently sloping hillside before puncturing the ground to allow natural light into the basement retail zones. Traditional Japanese crafts have also been referenced in the design, such as the edo kiriko glass etching technique. “As many new developments around the world can be harsh and sterile we wondered if we could provide a more human-centered alternative by integrating surprisingly intense quantities of planting and greenery,” Heatherwick continues.

“Set within a natural valley, we have chosen to accentuate that topography through our design, creating an undulating arrangement that uses a pergola-like structural system to create a variety of landscape spaces, from hidden gardens to sunken courtyards,” adds Neil Hubbard, group leader at Heatherwick Studio. “Weaving and flowing through the scheme, a family of pavilions emerges from the grid of the pergola.” The project, Heatherwick Studio’s first in japan to go into construction, is due to complete in march 2023. And meanwhile you can check 15 of the most expensive houses in the world.

Russian company Skydom has created a series of dwellings that revolve around a contemporary rounded structure. Skydome has six different models that vary in size, starting at 34 square meters…
View Post

Architecture firm OMA have recently completed The Innovationen Tower, the first building of the two Norra Tornen residential towers that are located in Hagastaden, a new district in the north…
View Post 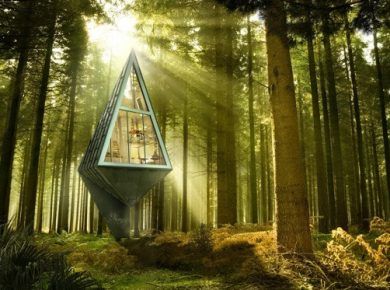 Denmark based architecture and interior designer Konrad Wójcik has come up with an idea to reside people with nature without any threat to nature. This project, called Primeval Symbiosis (Single…
View Post