Since its inception, Hyperloop has claimed that passengers will travel between and within cities in minutes instead of hours thanks to its ultra-fast traveling system that brings airplane speeds to the ground. In a step that seems to bring it closer to reality, HyperloopTT and Dar Al-Handasah have revealed images of the first-ever completed full-scale designs for commercial hyperloop systems created with sustainable, responsive architecture and engineering.

The complete design by HyperloopTT has been created in collaboration with Dar’s team including Sister Firms Perkins+Will, T.Y.Lin, and Currie & Brown. It features a fully integrated passenger and capsule system, photovoltaic solar cell integration, power facilities, maintenance, safety, and service aspects. It is estimated that this system could reduce carbon emissions by as much as 143 millions tons, showing the potential to be a significant factor in combating the climate crisis.

Overall, the design harnesses the full-potential of decades of nature-inspired design innovations, surpass LEED platinum certification and inspire a wave of developments targeting the highest LEED and BREEAM ranking. functioning as an on-demand high-speed waypoint for regional connectivity, the stations aim to facilitate passenger traffic volumes, creating a highly-efficient transportation system that expands local, national and continental economies. Its structure is covered with optimized solar panels that adjust with shifting daylight to capture renewable energy, moving the sun to harness clean energy independent of fossil fuel-powered grids. The hyperloopTT has also joined the UN global compact comprised of companies devoted to sustainability.

Designed by Belgian architect David Tajchman, the “Gran Mediterraneo” is a conceptual highrise building conceived for the Israeli city of Tel Aviv. The scheme brings together a range of innovative…
View Post 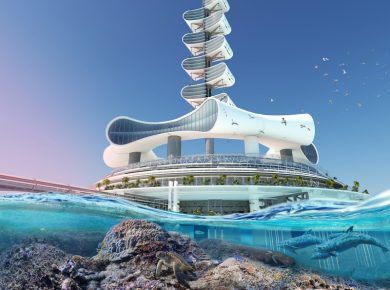 The eco island is the next step in noninvasive architecture that actively improves the environment. To commemorate the 50 th anniversary of Cancun’s development into a worldwide tourist destination, designer…
View Post

Lumishell is a prefabricated dwelling designed to provide a comfortable cocoon habit in different, and potentially harsh, weather conditions. The project is a collaboration between Lumicene, a company that has…
View Post

Designed with a mechanical system, the Casa Ojalà is a modular nature retreat. The tiny wooden structure can open and close walls and ceiling to immerse those inside in views…
View Post