Studio Viktor Sørless has designed a coastal summer home currently under construction in Denmark. Called the Dune House, the project was made to be a one-off contemporary home on the edge of waterfront. Overlooking unobstructed views across the landscape, the project was designed for a film enthusiast to be a sustainable retreat inspired by Roman Polanski’s movie The Ghostwriter .

The dwelling is currently under construction in Hvide Sande, a small town in the middle of the Holmsland Dunes and placed around the artificial canal which connects Ringkøbing Fjord to the North Sea. Elevated off the ground, the project takes its shape because the client has a form of mirror-touch synaesthesia. Location was important for the client, as he feels the sensation of the wind in the dunes as a calming experience. As a result, curtains and large windows were placed in every room to emphasize the movement of wind.

As Studio Viktor Sørless explains, the house is entered via an elevator room which functions as a vestibule and gallery. The cross-formed building is oriented to the four cardinal directions, and in turn, considers light as the fifth element orienting and driving the design. The angle of light that is formed and its direction changes throughout the day, and as a result, the coastal home was made to build a series of cinematic moods and messages. The curtains empower the “scenes” of the home, while at the same time, becoming activated by the wind. The home was partly inspired by philosopher Hermann Schmitz’s idea that wind is a half-thing (Halbding). “If wind is gone, we don’t know where it’s gone but we can feel the absence and presence on our bodies. Half-things create atmospheres.” Also if you like houses with views you should check Fabulous Country Villa at the Lake.

Based in Wrocław, Poland, Michal Nowak posts most of his designs on the creative art platform Behance, where they thrive and receive much praise from architecture and design fans. The…
View Post 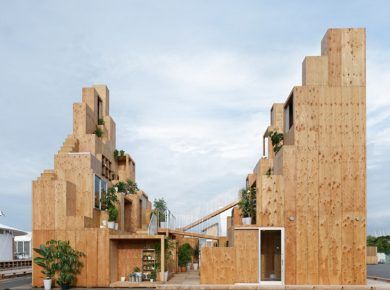 Commissioned by the Daito Trust Construction, Sou Fujimoto’s pavilion for House Vision 2 is a response to “redefining the rental house”. Creating a model that visualizes as a interconnected system…
View Post

This time we want to show you really crazy house – the Pyramid Solo House by TNA Architects. This wild pyramid is just one of 12 ‘ Solo House ‘…
View Post 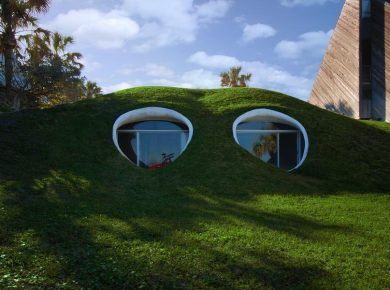 Back in 1964, Hurricane Dora created a dune on a piece of property in Florida. It couldn’t have picked a better place as the property was owned by a very…
View Post

Polish designer Karina Wiciak of Wamhouse Studio has visualized four unique concrete and glass house designs inspired by the logos of the famous international brands. One of them is the…
View Post