Human obsession with speed goes back to the time when man first invented the wheel. Humans have been known to have a love for speeding since time immortal. In ancient times, chariot racing was a popular sport in ancient Roman and Greek civilizations. Today, the human quest for speed and thrill has resulted in several speed boats that can literally set the waterbed scorching with their speeds. Read on to know more about the fastest motor boat speeds attainted by the most advanced water vehicles. And don’t forget to check 10 world’s fastest motorcycles.

Here are the ten fastest speed boats to look out for in 2022.

Outerlimits power boats are offering a wide range of speed power boats. Their faster boat category includes the SV-50, SV-52, SL-44, SL-52 and even catamarans like the 43CAT and 48CAT. The SV-52 is one of their fastest speed boats. It has been designed especially for superior high-speed performances and is known for its steady ride and soft landing even in rough and choppy waters. The cockpit boasts of dual helm controls, a standard GPS chart plotter. They even offer both open as well as swim platform models. Most models also have a half cabin for easy storage of extra equipment or much-needed protection from the sun and the sea. At 52 feet, this long beauty is known to easily record 100 MPH plus speeds in even adverse conditions. It has a fuel capacity of 250 gallons and can easily accommodate up to four people in it.

The South Bay 925 CR is unbelievable the worlds’ fastest pontoon. If a pontoon can travel at speeds of more than 110 MPH, its only the South Bay 925 CR. In fact, when Brad Rowland’s South Bay 925 CR recorded a speed of 114 MPH, it was a new world record! It is fitted with superior Garmin GPS navigation. With a length of 27 feet and a beam of 8 feet, it is perfect for someone who doesn’t want a very large speed boat. The standard equipment found on the South Bay 925CR are Manual Sport Arch, 4-speaker Bluetooth stereo, interior, and exterior LED light. If you are in the mood to create a perfect party ambiance you can even choose to opt for underwater LED lights.

As the name suggests the Fountain 47 Lightning, is definitely lightning fast. The Fountain 47 Lightning is able to go as fast as 115 MPH. It’s decently sized at 47 feet and has a seating capacity of four to six people depending on the model you choose. It owes it’s super-fast speed to the twin Mercury Racing 1,075 HP engines. It is known as the cruiser boat that can go anyplace at any time. The fuel tank capacity is 340 gallons and it also has a Fuel Vapour Detection system. The standard features on the Fountain 47 Lightning include a Garmin GPS, LED push-button switches on the navigation dashboard, and Vessel view instrumentation. The cockpit is equipped with LED cockpit lights, motorized hatches and bolster seats with electric drop-downmechanism. What more can you ask for?

The cigarette racing team’s 50 AMG GTS slim and long cigarette shaped 50 AMG GTS is an incredibly powerful speedboat. It is considered to be one of the fastest electric speed boats in the world. It is powered by a 2200 HP AMG electric engine which also drives the SLS AMG Coupe Electric Drive – the world’s most powerful and fastest electric car.

This super fast electric speed boat is fitted with a lithium-ion battery containing 3,456 lithium-ion cells. The efficient battery pack can store power at 400 volts offering maximum driving current of about 6,000 amperes. This dashing speedboat has two chargers providing a total charging rate of 44 kW and just takes a meager seven hours for a full charge.

The Nor-Tech 5200 Roadster is a large boat with seating capacity for up to 10 people. Depending on the type of engine fitted, the 5200 Roadster can clock speeds of over 150 MPH. With a 400-gallon fuel tank, the 5200 Roadster has 5400 HP engines, making it one of the most powerful boats in the water. Along with offering unmatchable speeds, the Roadster is also the ultimate in luxury boating. It features a padded sun lounge, swimming platform with boarding ladder and also video monitors. The Roadster is also equipped with a state-of-the-art music system and aft facing seats with coolers. Nor-Tech can also offer a wide range of configurations to suit our engine requirements.

The Skater 46 Pleasure is a high speed and power boat. As believed by the company Skater, it is truly the “Rolls Royce of power boats.” The Skater 46 Pleasure is fitted with twin Teague Custom engines of 1500 HP each giving a total power of 3000 HP. The Skater comes with dual fuel tanks with a maximum capacity of 1,000 gallons. It is can easily cruise at more than 100 MPh for long hours and is designed for soft landings in rough waters. With maximum speeds of approximately 175 MPH, the Skater 46 Pleasure is one of the fastest motor boats available today. Most boats also feature a complete stereo system and air-conditioning. Its spacious design can seat even five people. Its unique design lets you enjoy the speed thrill and also lets you sit back and enjoy the joy-ride.

The Mystic Powerboats C5000 Turbine is manufactured by Florida based Mystic Powerboats. Powered by two 1850 HP engines it has a total engine power of 3700 HP and can easily reach cruising speeds of 150 MPH. The C5000 is considered to be one of the most powerful speedboats in the world today. The highest recorded speed of the C5000 is 250 MPH. The powerful C5000 beast runs on diesel. With a fuel tank capacity of 600 gallons, it has even recorded 15 engine hours.

The C5000 is almost 50 feet long. It comes equipped with electronic equipment like Log-speedometer, Plotter, Navigation center and GPS. Some of the extra features for enjoying your joy-ride are radio, CD player, and cockpit speakers. It also has a road trailer and launching trailer for ease of movement on land. This super-fast catamaran also offers cockpit air-conditioning. The Mystic Powerboats also offers C4400 and C3800 models.

One of the oldest and fastest hydroplanes of the 20th century, the Bluebird K7 is considered to be one of the pioneers in the field of speedboats. Donald Campbell held the records of the fastest water speeds in the 1950s and 1960s in this amazing hydroplane. He set seven-speed records between July 1955 and December 1964. Unbelievably, the Bluebird K7 managed to record 276 MPH way back in 1964. Unfortunately, Campbell lost his life in 1967 while attempting to record a speed of 300 MPH. The wreckage of the Bluebird was recovered between October’2000 and May’2001. Campbell’s daughter has formally gifted the Bluebird’s recovered wreckage to the Ruskin Museum. It is believed that the Bluebird Project is undertaking trials for the return of Bluebird K7 to Scottish waters once again.

Would you believe that the Spirit of Australia which holds the World Record of clocking a speed of 317.6 MPH in was designed and built by Ken Warby in his backyard? The wooden speed boat ran on Westinghouse J34 jet engines which are also used for aircraft and fighter jets. The Spirit of Australia is on permanent display at the Australian National Maritime Museum. Though several people have tried to break Warby’s world water speed record, none have succeeded. Warby also went on to build the Aussie Spirit as a successor to the Spirit of Australia.

With so many awesome speed machines available, it is becoming increasingly easy to indulge in the ultimate adrenaline overdrive by sailing over waters. Cross the 100 MPH mark and enjoy the fastest boats in the world! 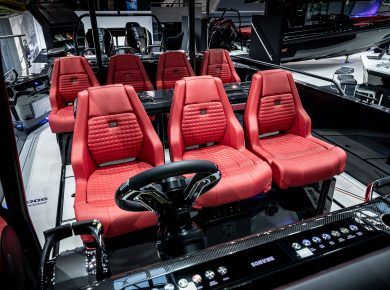 Recipient of a Red Dot Design Award, Brabus Marine‘s Shadow 900 is an impressive boat – and the Black Ops edition is the most impressive of them all. More well-suited…
View Post