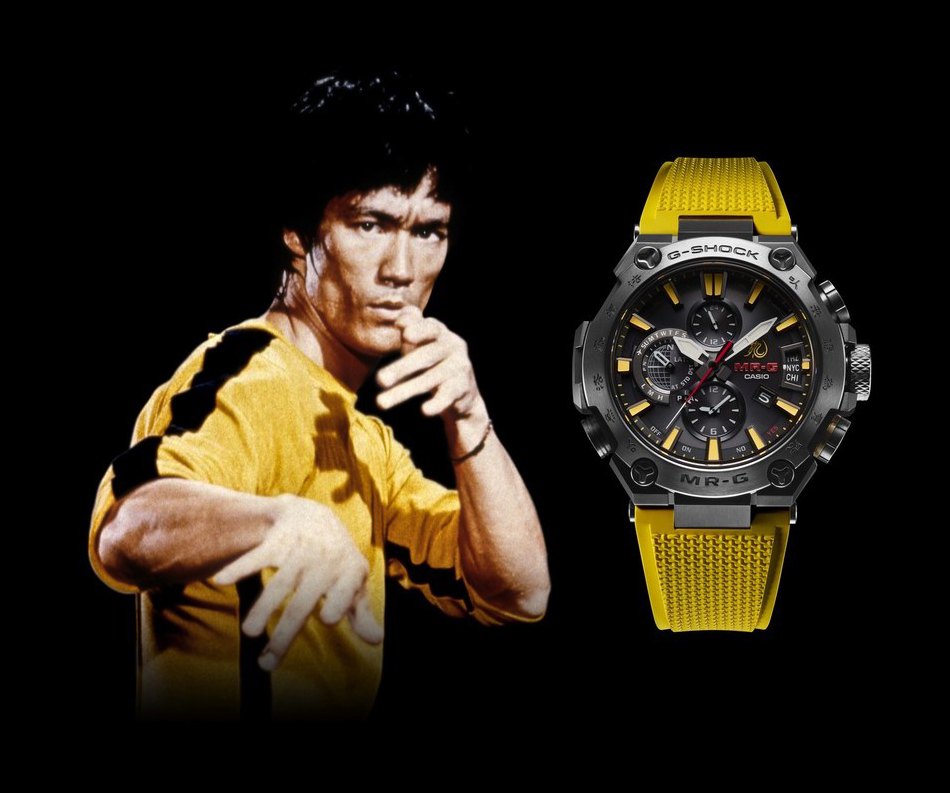 G-Shock unveiled a new limited edition version of their flagship MR-G timepiece that commemorates the late actor and martial artist Bruce Lee, who would have turned 80 this year. The new MR-G x Bruce Lee Limited Edition model features a titanium case (check other titanium watches) measuring 49.8 mm x 54.7 mm x 16.9 mm, with a fixed titanium bezel, both treated with black diamond-like carbon that makes the watch highly resistant to scratches. In addition to the coating, which is inherently durable, the case and bezel have also been subjected to a deep-layer hardening process, which makes the case 4-5 times harder than traditional titanium, according to Casio. 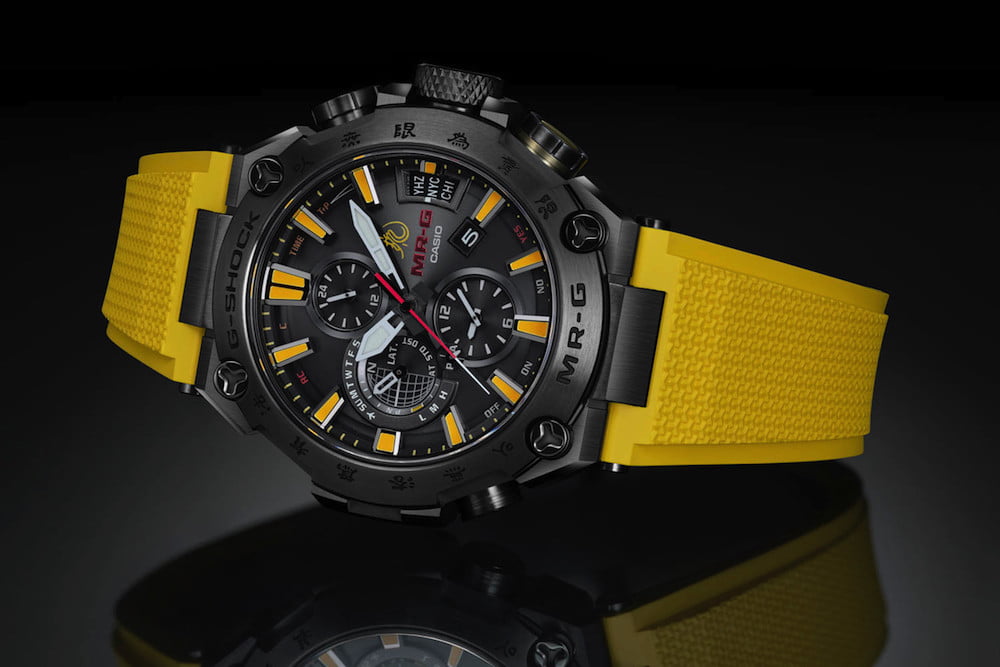 Contrasting the black case is a yellow Dura Soft Fluoro-Rubber band which as its name suggests is designed for high durability and to feel soft on the wrist. “The colors black and yellow are used for the case and the band respectively, recalling the tracksuit worn by Bruce Lee in the posthumously released film, Game of Death. In addition, the colors yellow and red, which appear in the emblem of Jeet Kune Do, the martial arts philosophy founded by Lee, are used for the indices and the MR-G logo and second hand, respectively,” according to Casio. 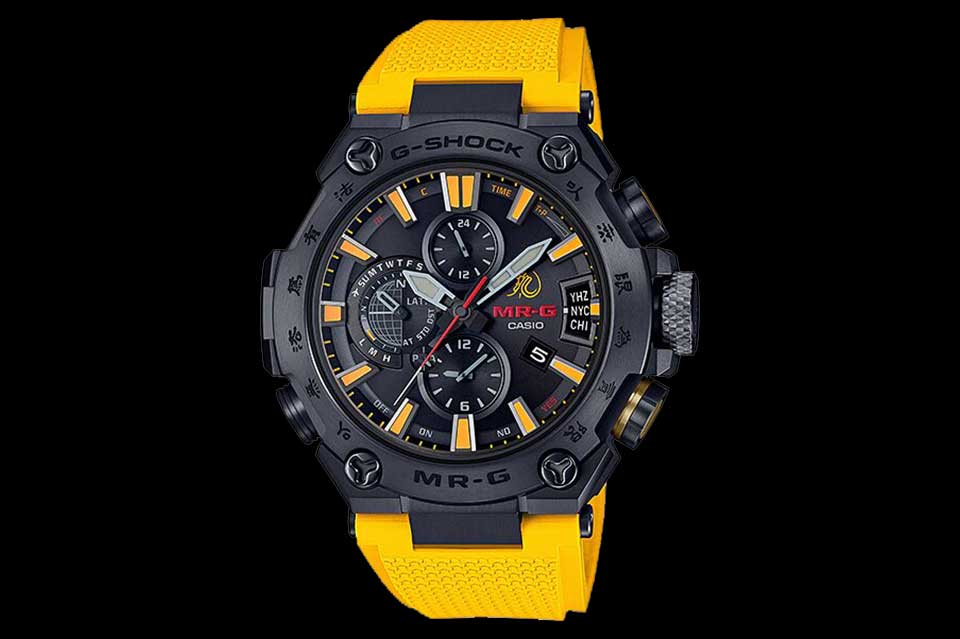 The bezel is engraved with “Using no way as a way, having no limitation as limitation,” a phrase that expresses the potential of Jeet Kune Do, while its symbol, with the same phrase in Chinese, is engraved on the case back. Further, the 3 Bruce Lee’s signature is on the dial at 3 o’clock, using the Chinese character “龍,” or dragon, Bruce’s nickname. 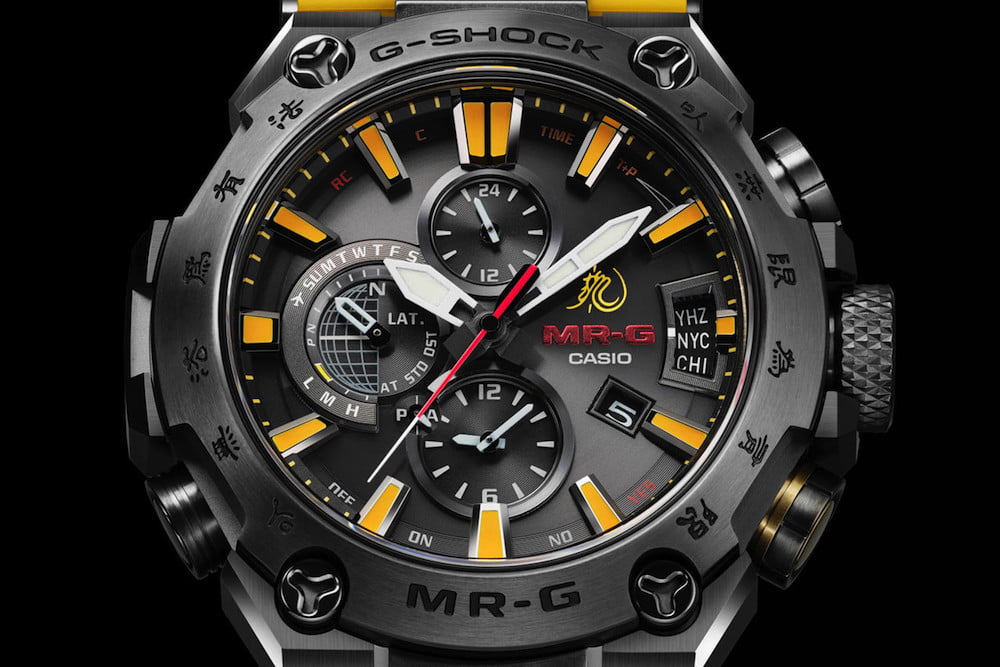 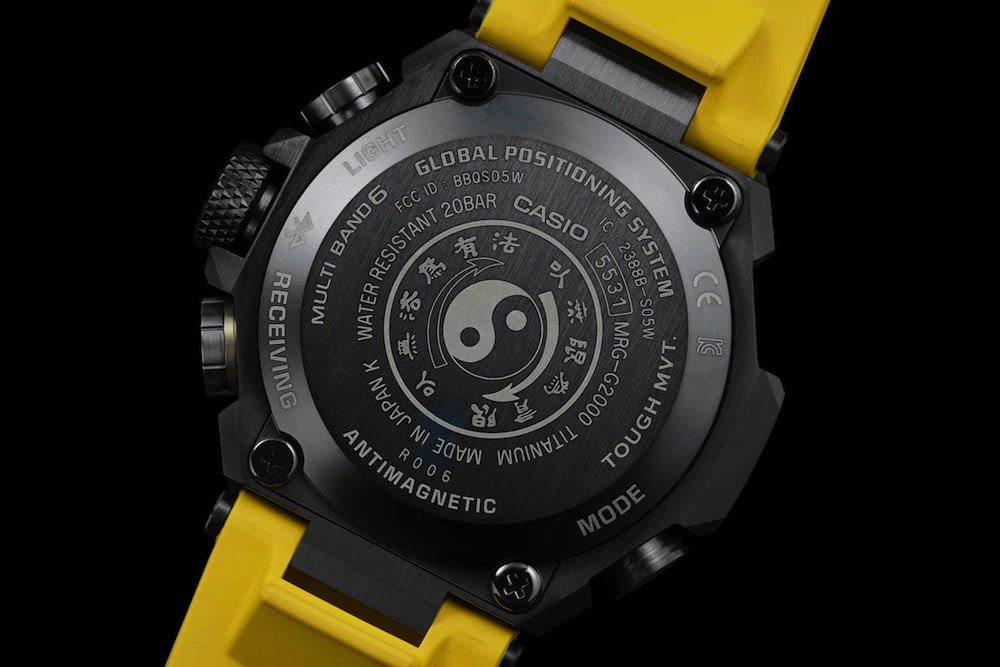 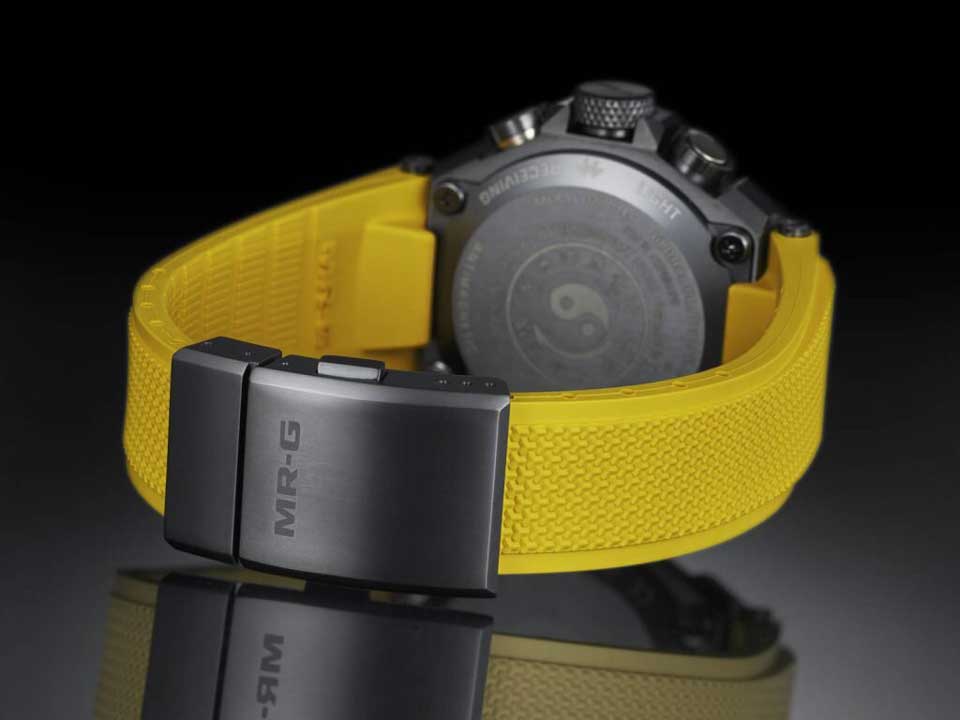 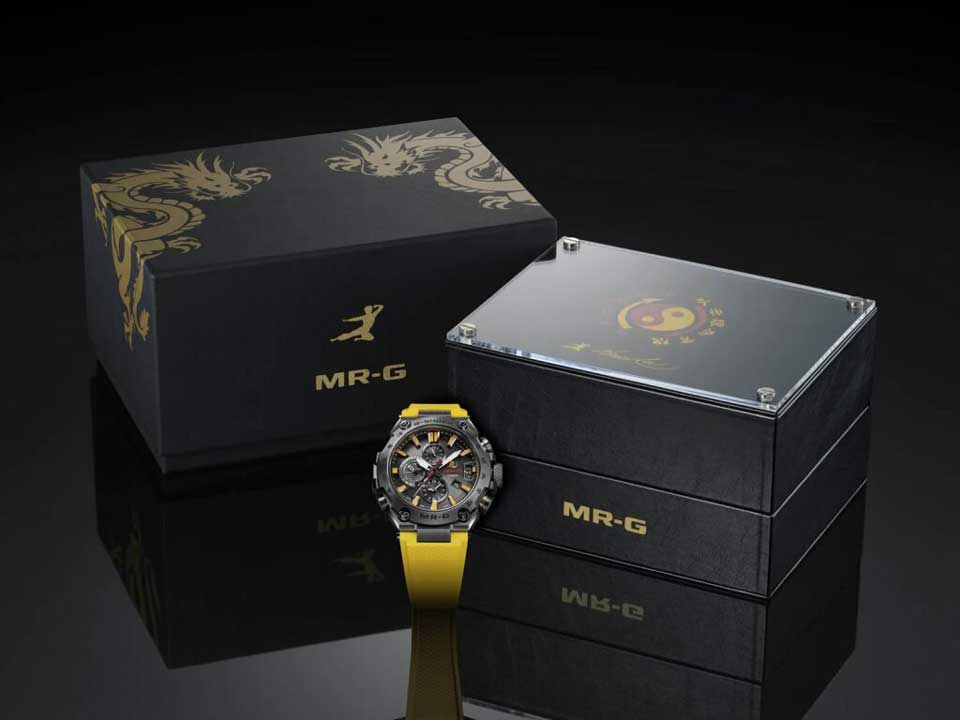 This limited edition is based on the MRG-G2000 of G-Shock’s flagship MR-G series. Accordingly, it has 3-way time adjustment capabilities using radio wave time-calibration signals, GPS satellite signals, and Bluetooth® to automatically keep ultra-precise time reflecting including time zone changes and daylight savings time. The MR-G x Bruce Lee Watch is highly shock resistant, 200 meters water-resistance, weighs 139 grams and has functions such as a 1/100th of a second stopwatch (24H), world time display (39 time zones), an LED light, airplane mode, full auto- calendar, countdown timer (24H), daily alarm, and more. Limited to 300 pieces, the MR-G x Bruce Lee Watch will be available for purchase beginning in April at select retailers and the G-SHOCK Soho Store, for a retail price of $4,000. Meanwhile be sure to check most expensive watches in the world. 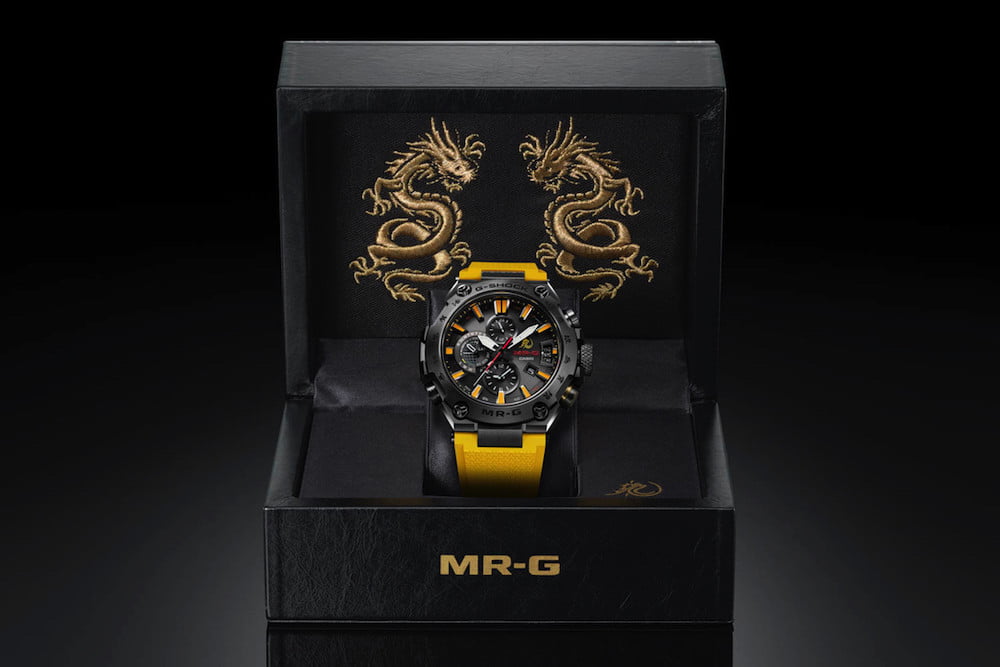 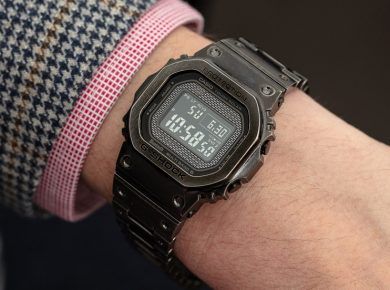 This year at Baselworld Casio debuted another iteration of their popular Full Metal 5000 timepiece, with a new vintage style black finish. Like previous versions of the Full Metal G-Shock,…
View Post 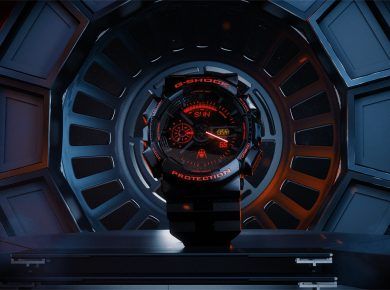 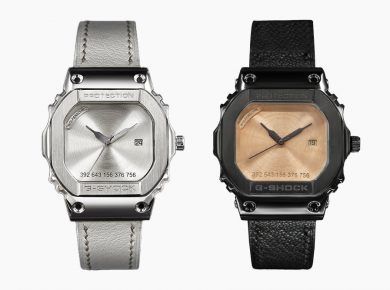 Originally born in Georgia before emigrating to Israel at the age of eight, Michael Wolfensohn is a software designer, amateur engineer, and fashion and custom motorcycle enthusiast . After serving…
View Post