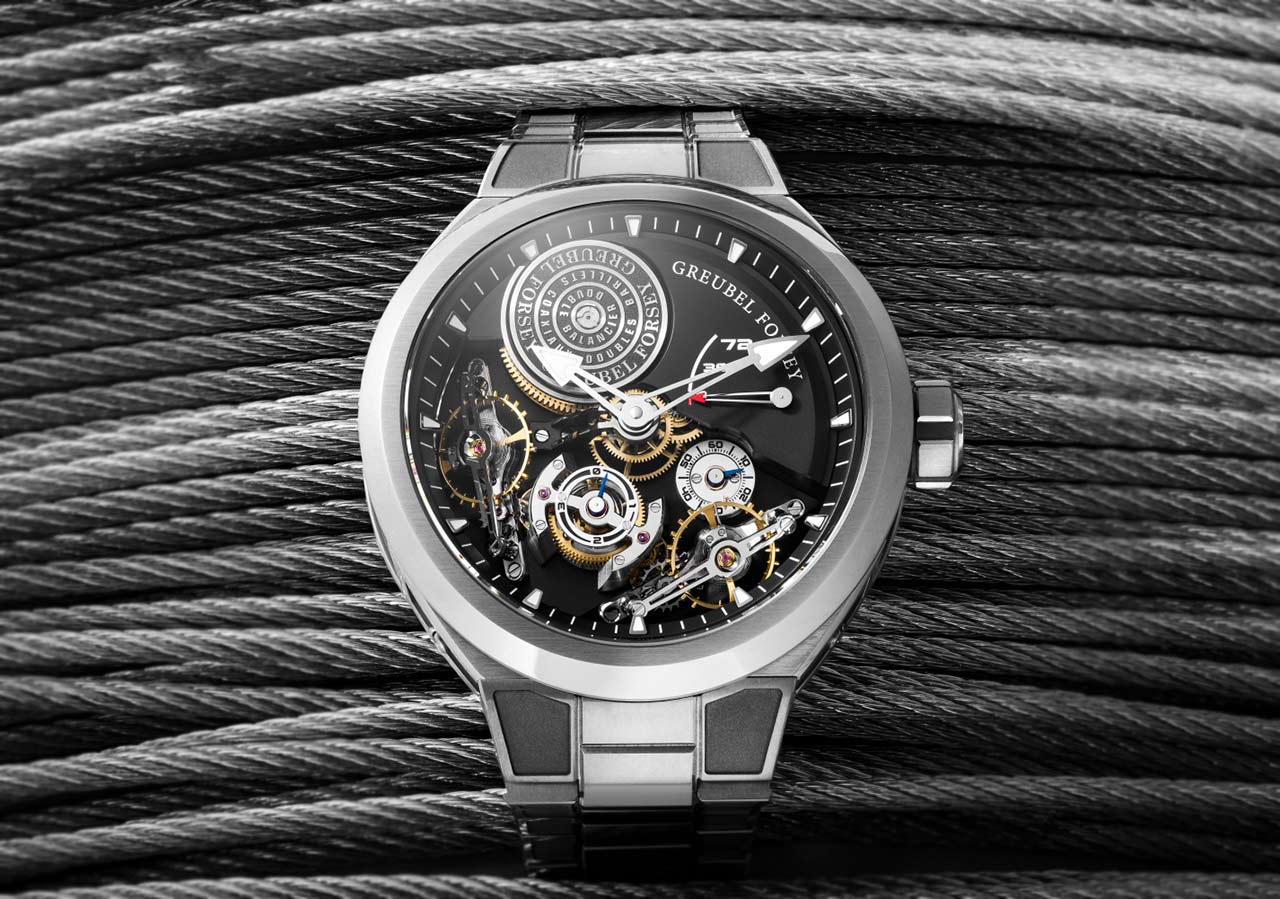 Greubel Forsey patented its Double Balancier invention in 2007. The first prototype featured two superimposed regulating organs inclined at 20°. In a second iteration, the two regulating organs were positioned in different three-dimensional planes and inclined at 35°. Finally, in 2016, the Swiss brand presented the invention in its current form: the two balance wheels are dissociated, inclined at 30° and separated by a constant spherical differential which calculates their average timing rate.

Today, Greubel Forsey unveils a new timepiece developed around the Double Balancier solution, the Double Balancier Convexe which gets its name from the convex profile of its 43.5 mm x 14.35 mm (sapphire crystal included) titanium case that guarantees water resistance up to a pressure of 10 ATM (approximately 100 meters / 330 feet). 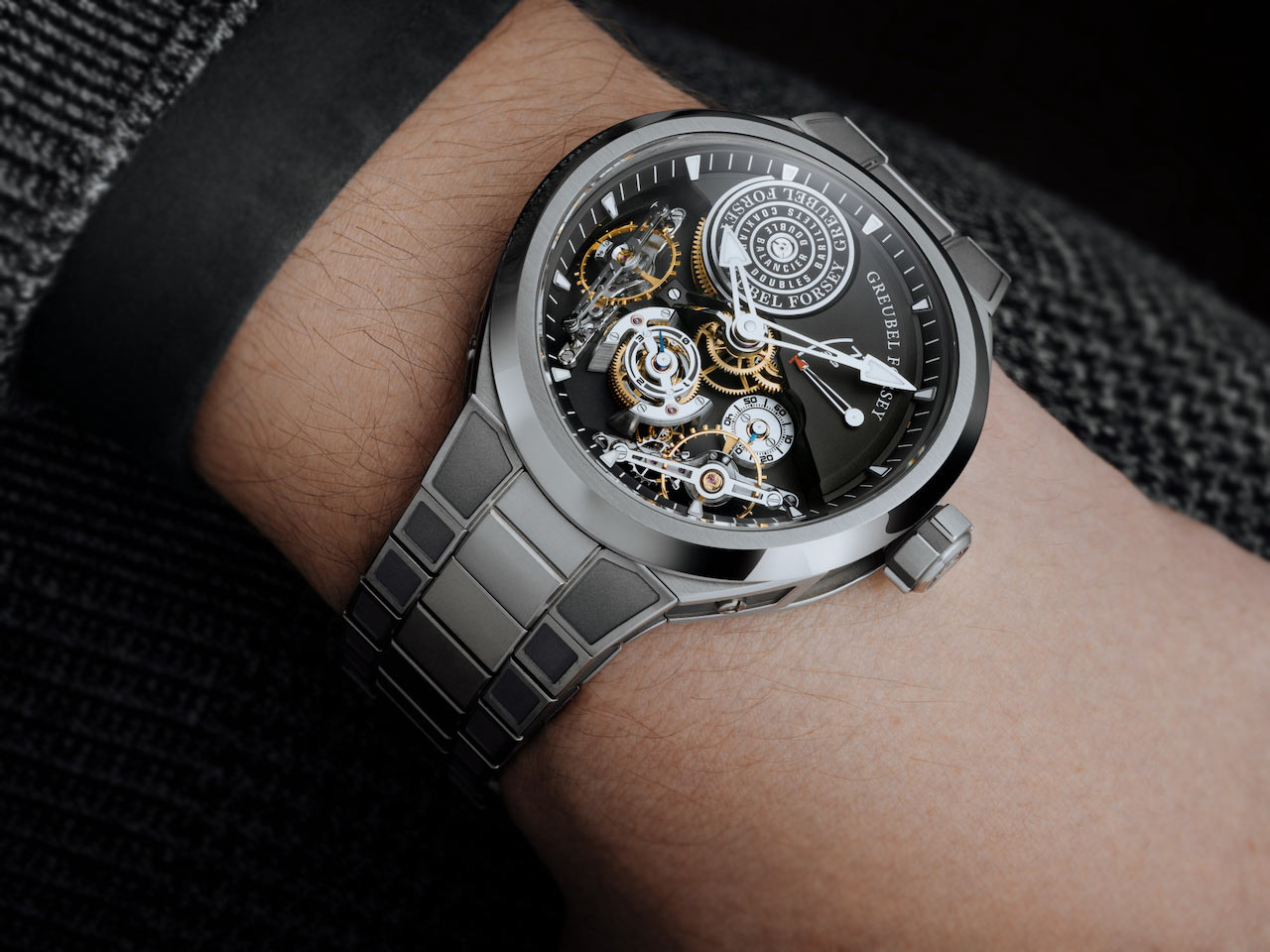 The three regulating organs (two balance wheels, one differential) occupy more than half of the dial and provide unprecedented depth thanks to the unique shape of the watch.

The gear train emerges from below the surface of the semicircular black-treated titanium bridge and extends into the hour and minute hands which take on a curved profile and are filled with Super-LumiNova, just like the hour indexes. 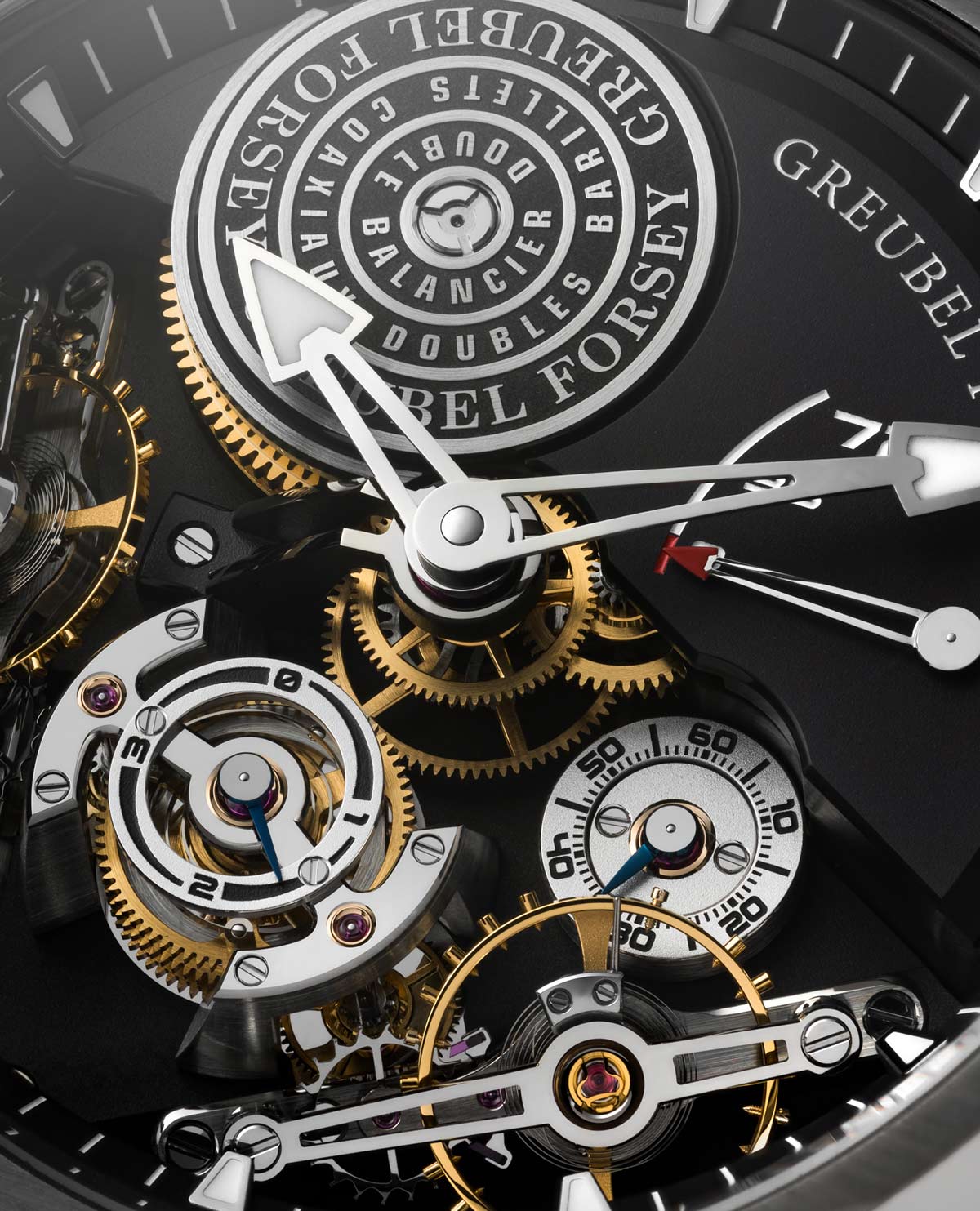 The small seconds and 4-minute hand indicating the rotational speed of the spherical differential are in polished blued steel while the power reserve is indicated by a polished and openworked hand with a red tip. The barrel cover stands out at 11 o’clock with its relief-engraved text, circular-grained with polished chamfer, describing the properties of the two coaxial barrels in series with rapid rotation (one revolution in 3.2 hours). They drive a 374-part movement, endowed with a 72-hour chronometric power reserve. The beat frequency is 3 Hz or 21,600 vibrations per hour. 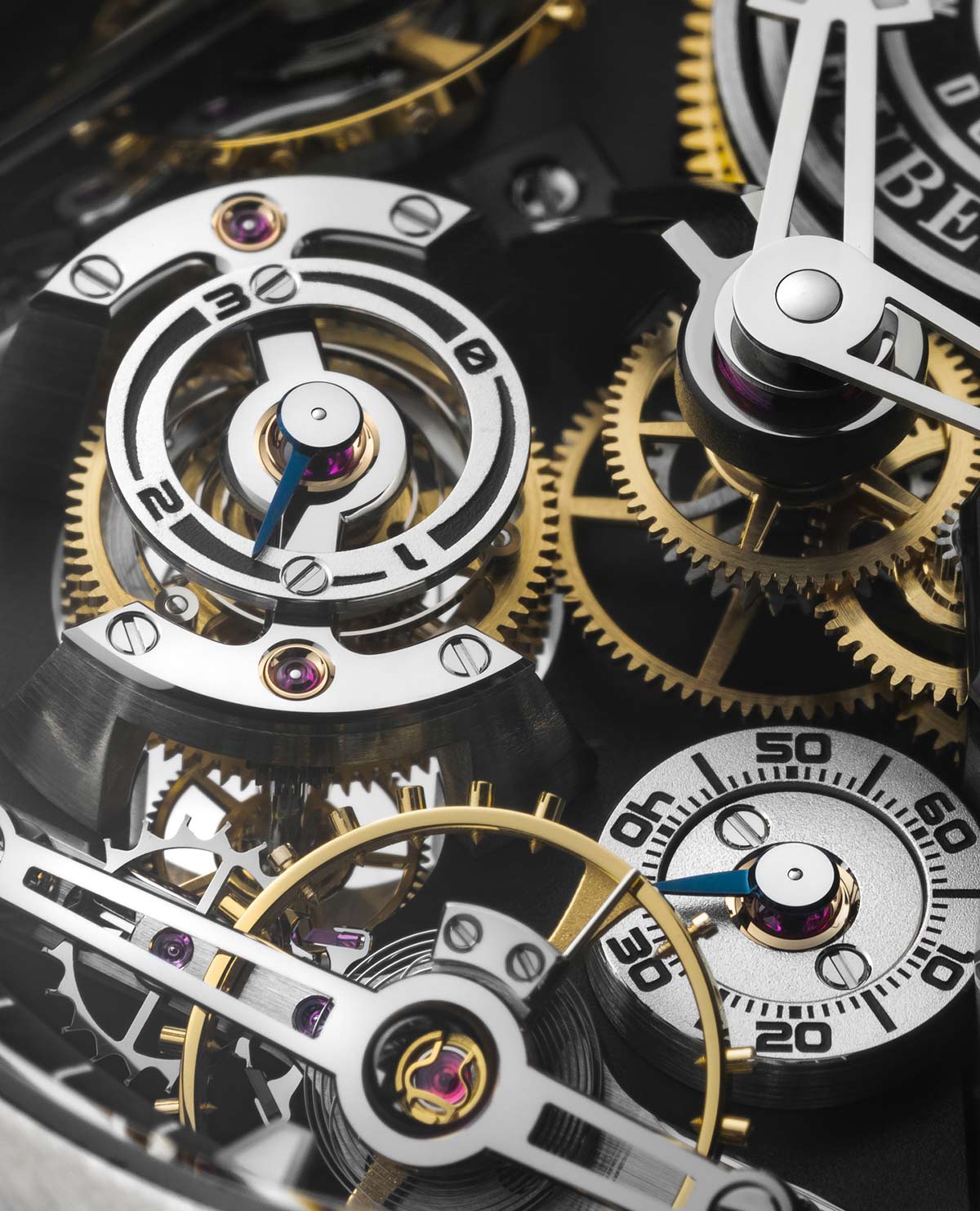 In the lower half of the Double Balancier Convexe, each regulating organ is sculpted individually occupying different planes. The inclined escapement platforms are straight-grained with hand-polished beveling and countersinks, while the differential bridge and balance wheel bridges are flat black polished with further hand-polished beveling. Every single component is hand finished to the highest standards as in the tradition of the brand. 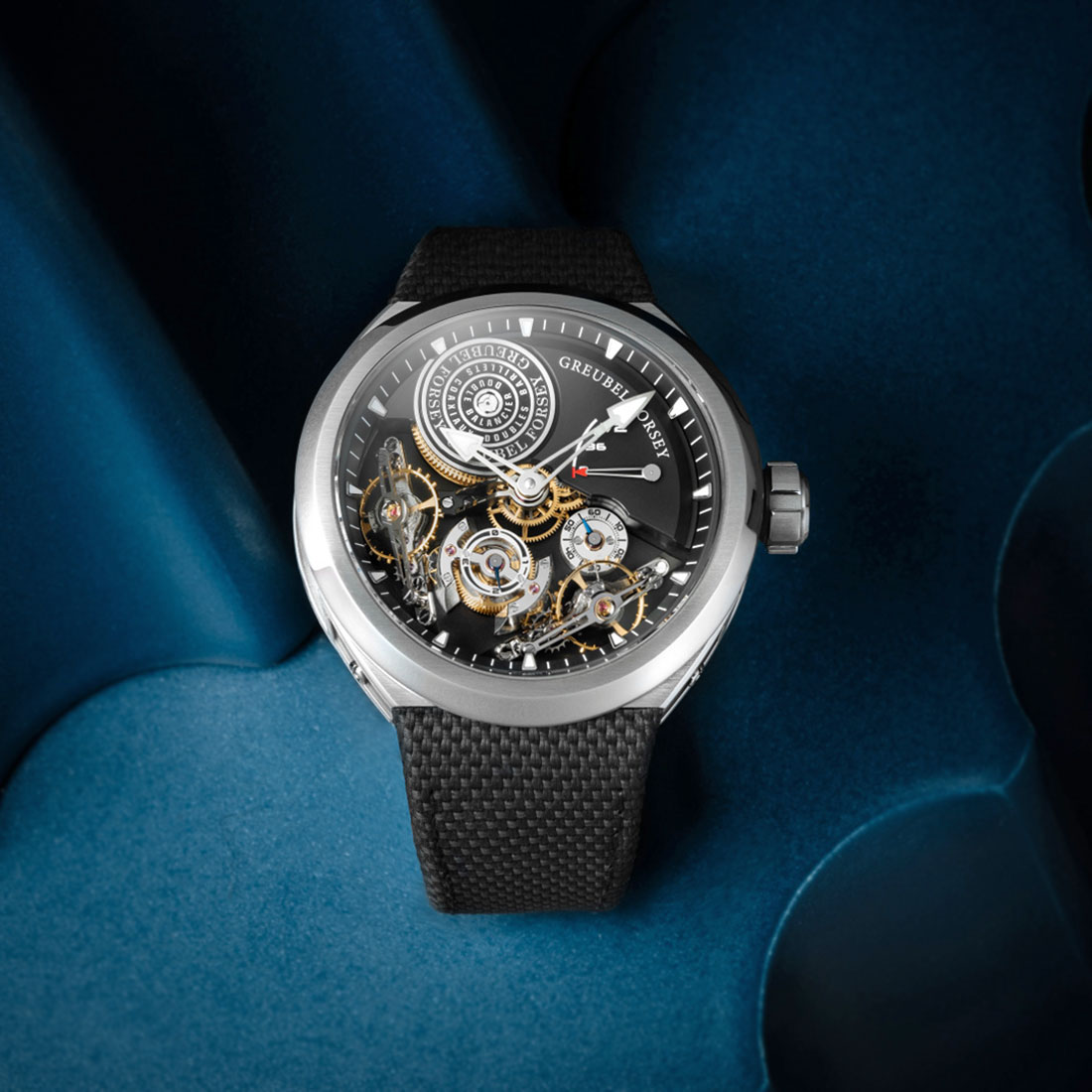 Integrated to the case, the profiled lugs extend onto either a textured rubber strap or a titanium bracelet. 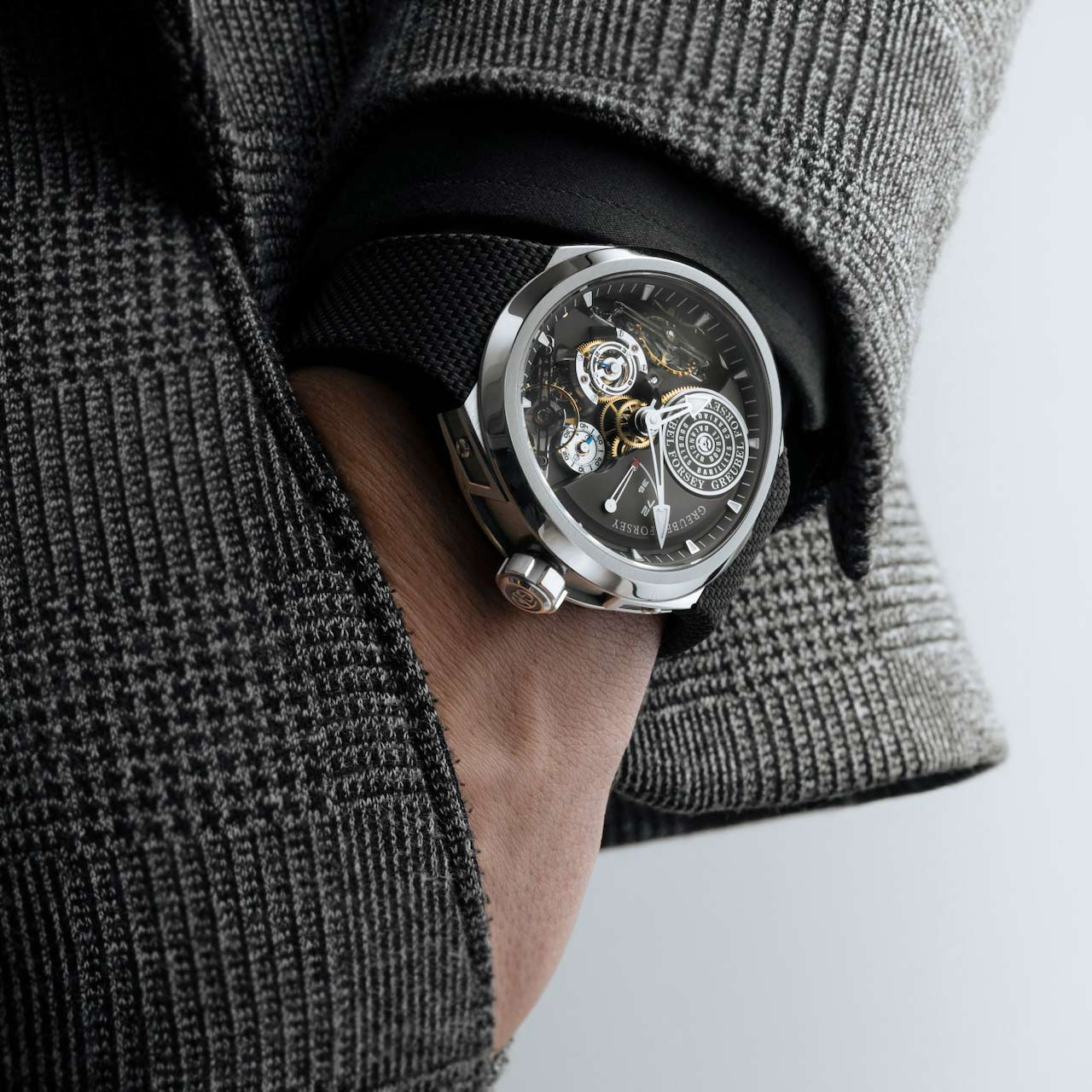 Greubel forsey will produce only 22 Double Balancier Convexe timepieces per year between 2022 and 2024 for a total of 66 pieces overall. Its price, local taxes excluded, is CHF 295,000 with strap or CHF 335,000 on titanium bracelet. 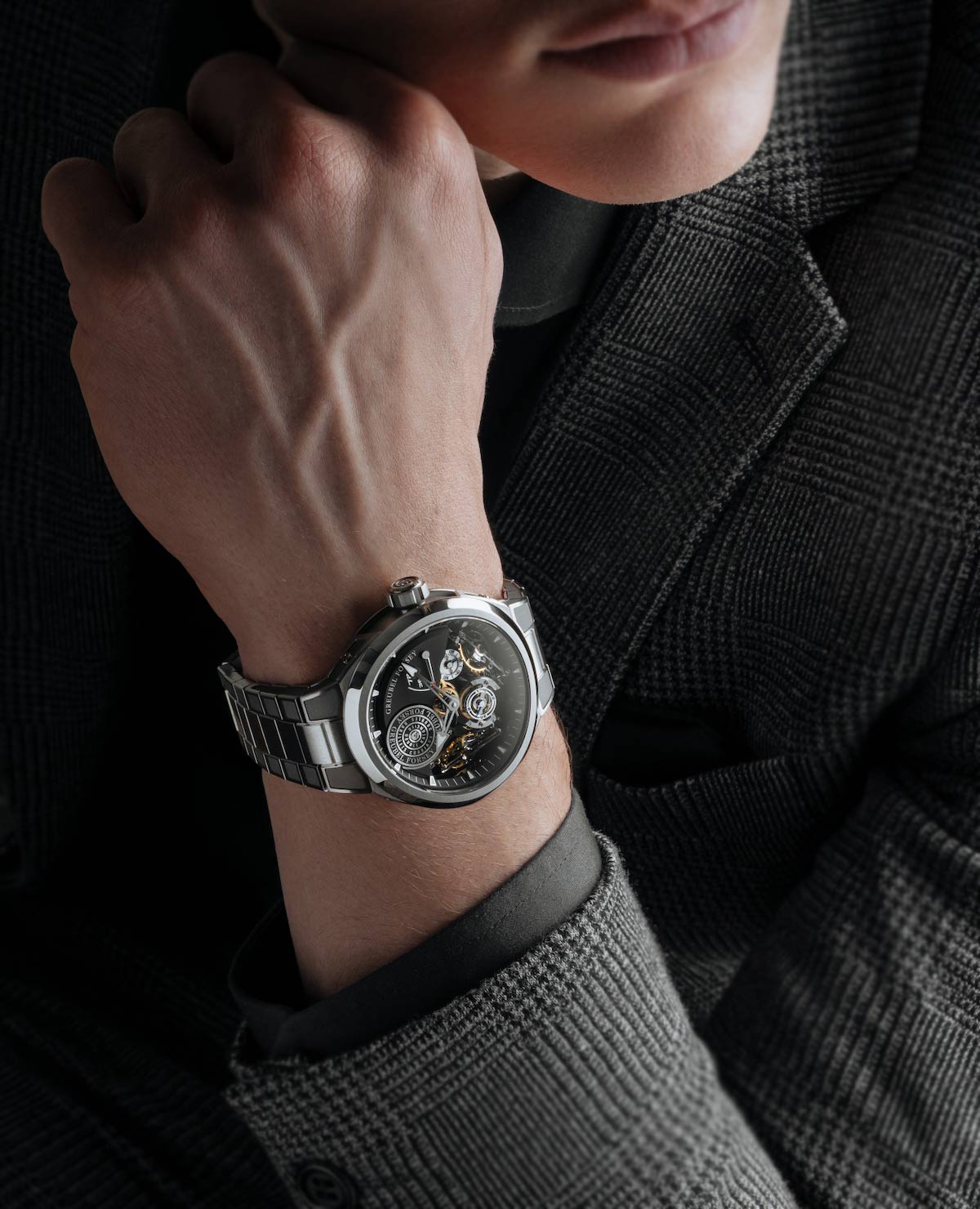