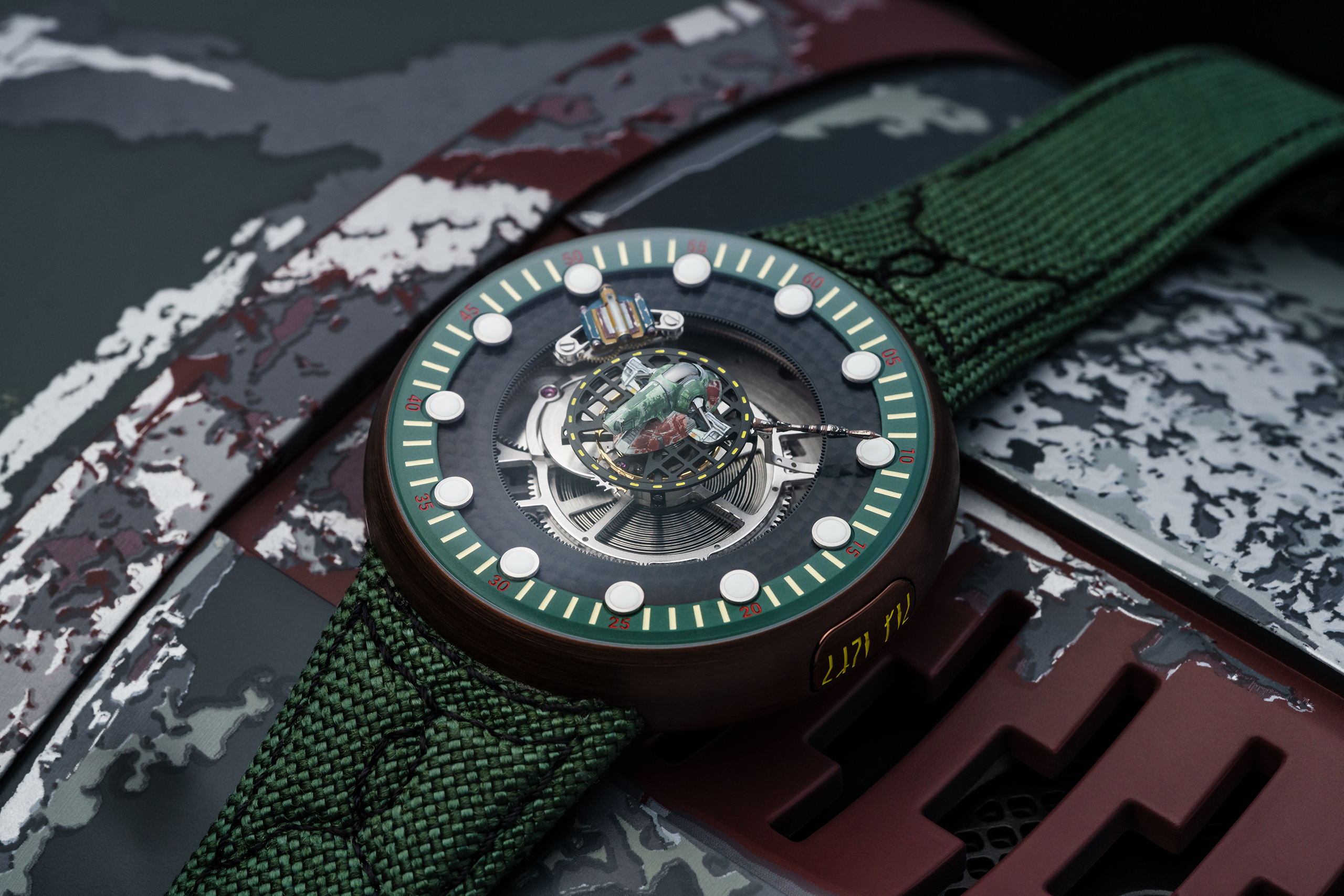 In collaboration with Lucasfilm Ltd., and an unnamed manufacturing partner, Kross Studio atelier in Glad, Switzerland designed and assembled this timepiece. Additionally, a detailed display case, made by a company called EFX that looks like Boba Fett’s Firespray starship, is included with each of the limited edition collector’s sets. A military version of the same ship is set on top of the tourbillon cage in the center of the dial. Each of these mini starships is composed of eight pieces and produced at Kross Studio using CNC machines. From there each piece has been engraved and hand-painted to mimic the weather appearance of the ship as seen on the Boba Fett television show on Disney. It reportedly took 90 hours to make each of the ten pieces that are based on the starship and each one is a unique piece. On caseback, Kross Studio’s D-ring crown system, allows the watch to be manually wound. Lifting the D-ring, you turn it like a winding key. The huge mainspring, visible underneath the tourbillon starship on the dial side, is good for a maximum of 120-hours, or five days. Setting the watch requires just a push of the button located on the case flank adjacent to 3 o’clock. Hidden quick-release strap buttons on the underside of the case also help preserve the timepiece’s clean lines and allow you to easily switch between the three straps: a green polyamide strap embossed with the pattern of Boba Fett’s chest armor, a chocolate color calfskin leather strap, or a black rubber strap. Each included strap has been reinforced with black rubber inlay. Interestingly, according to the brand, “Each EFX Boba Fett’s starship watch display is the same scale as the actual filming model as seen in Star Wars: The Empire Strikes Back. They are made with an aluminum and acrylic substructure with the detailed parts cast in resin. Each detailed piece is individually cast from a master made from the same model kit parts used to make the screen-used prop and then carefully finished and painted by hand. The parts of the EFX Boba Fett’s starship-inspired watch display were developed with a thorough review of the screen used prop.” Similar to the Death Star Ultimate Collector set, at $120,000 – the Boba Fett Tourbillon Collector set (Ref. SWBFT22 298) is a unique Stars Wars watch collectible, designed for a limited number of wealthy Star Wars collectors who love watches. May the 4th be with you!

15 Most Expensive Rolex Watches Ever Sold