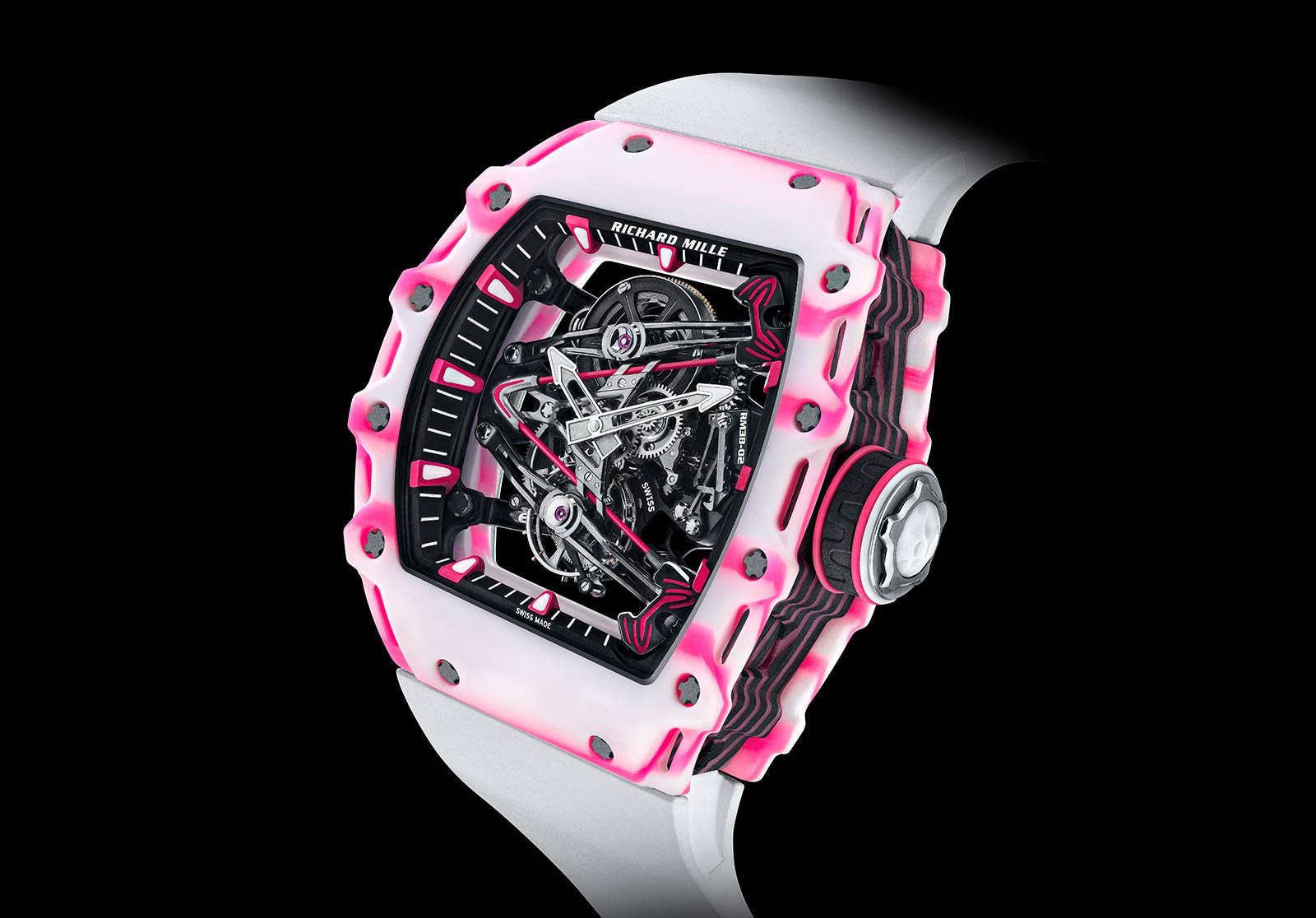 Richard Mille and professional golfer Bubba Watson have been partners for over ten years collaborating at the development of several timepieces but the pink colour – somehow an obsession for Bubba – had not yet been featured in any of them. Pink is on his clubs, his golf balls, his signature driver, his clothing so he pushed the Swiss brand to create a pink model since the beginning of their partnership. They finally agreed and the result is the new Richard Mille RM 38-02 Tourbillon Bubba Watson. 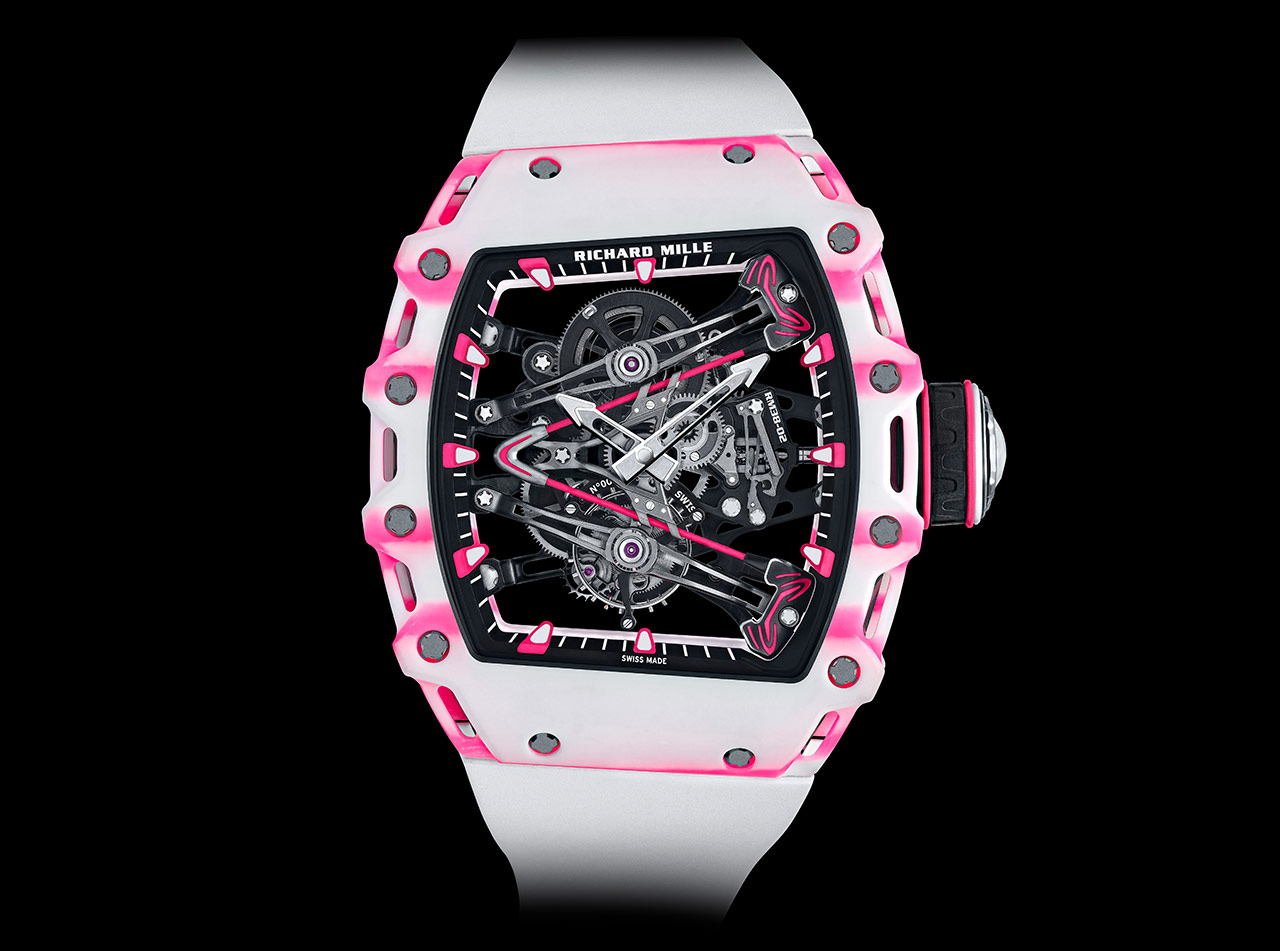 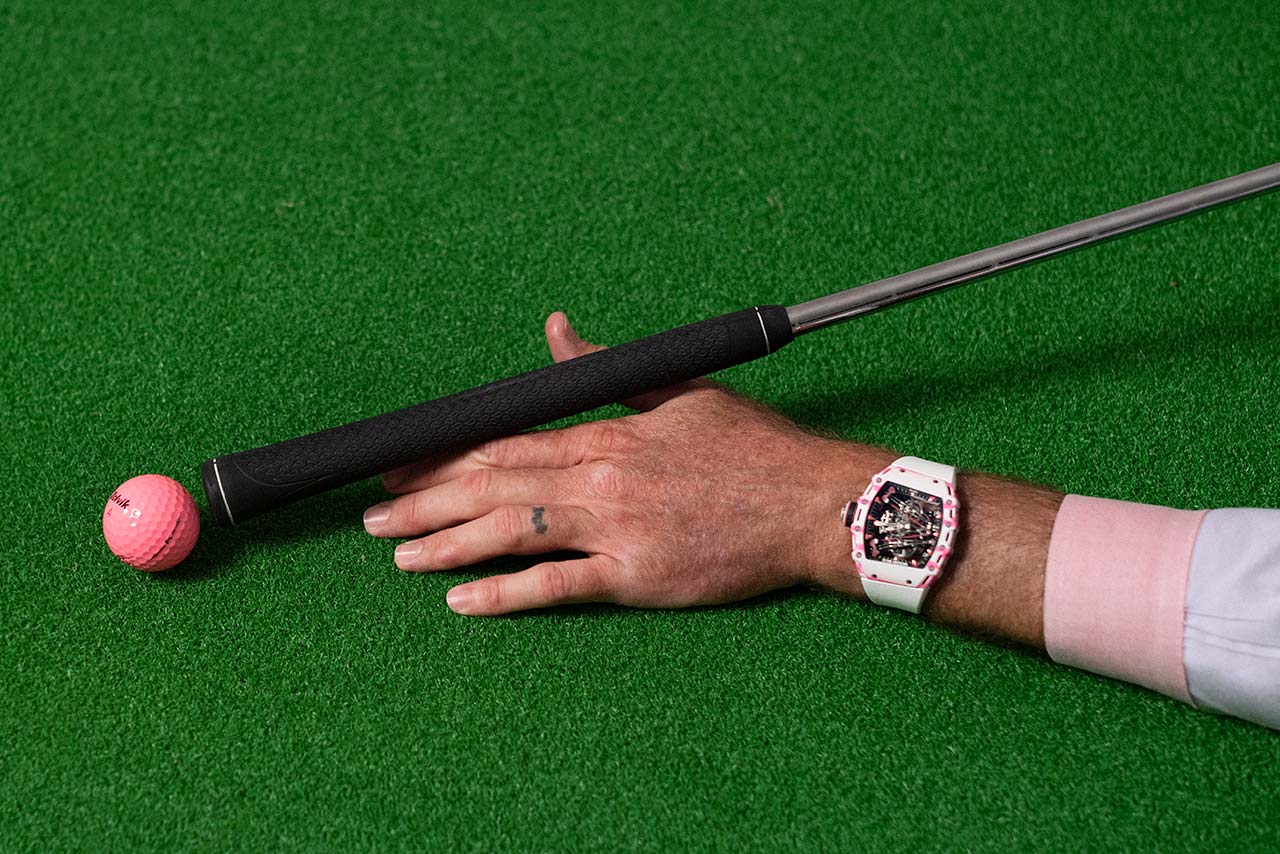 Inspired by the audacity of the previous calibres signed Bubba Watson and by his favourite colour, the RM 38-02 is built around a baseplate in Carbon TPT, which comprises many layers of parallel carbon filaments. This material, omnipresent in the RM 38-02, is very demanding in terms of machining, both because of its hardness and because of the skeletonisation it is subjected to. 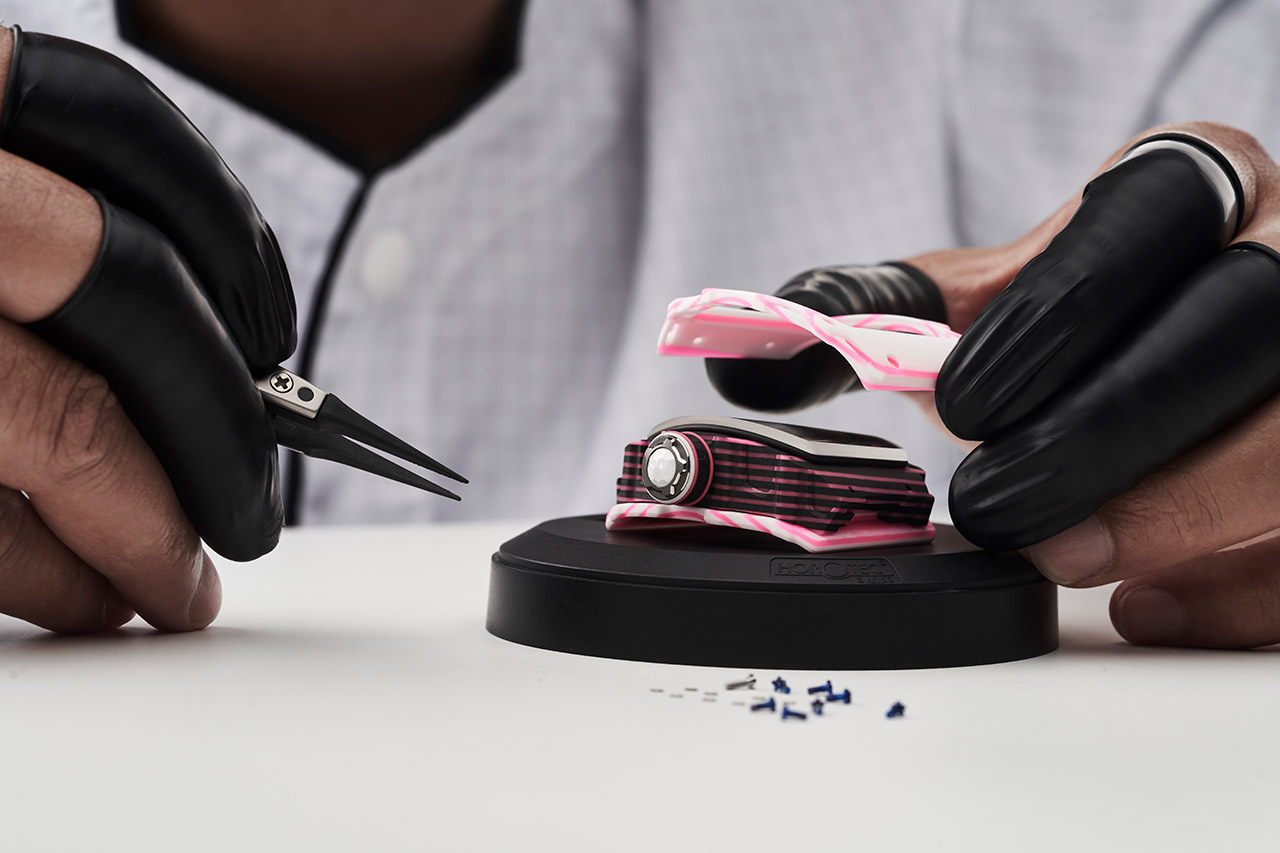 As for the entire watch, many extensive tests were carried out on the baseplate to ensure that its skeletonisation in no way affected its mechanical properties. And for sure, golf is an excellent testing ground for such a high-performance sport watch. On the wrist of a great hitter like Bubba Watson, this watch must be able to withstand the stresses of hard stops and drastic accelerations.

Considering that a golf ball today undergoes an acceleration of up to 50,000 g’s, it was critical to ensure that the RM 38-02 could withstand shocks of no less than 10,000 g’s. 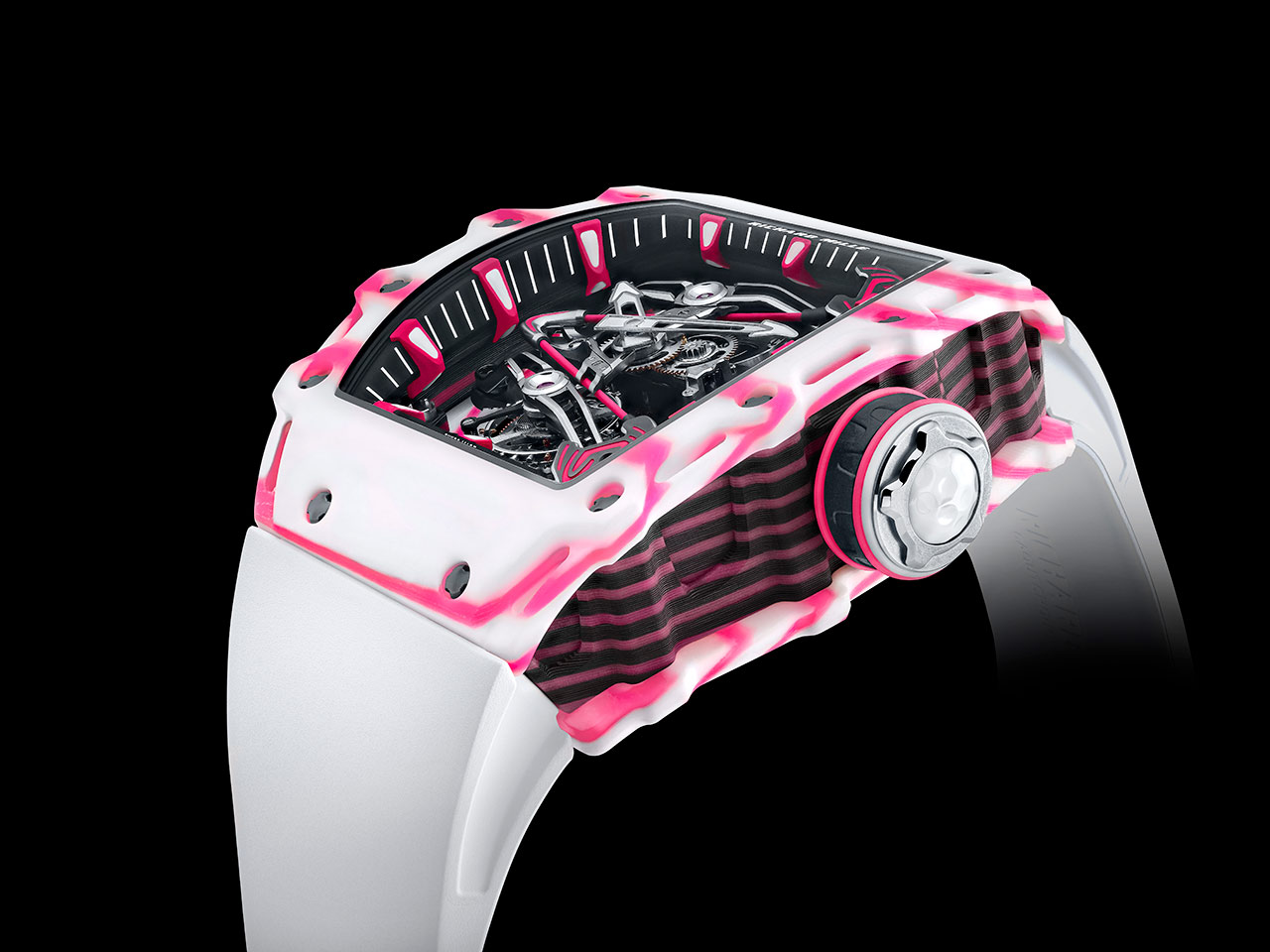 The baseplate supports grade 5 titanium bridges that firmly maintain the involute gear wheels and the 10.90 mm tourbillon fitted with a variable-inertia balance. The open-work bridge incorporates two tubes that pass through the movement on either side. In grade 5 titanium and hand painted in pink, they highlight the unique architecture of the RM38-02 calibre. 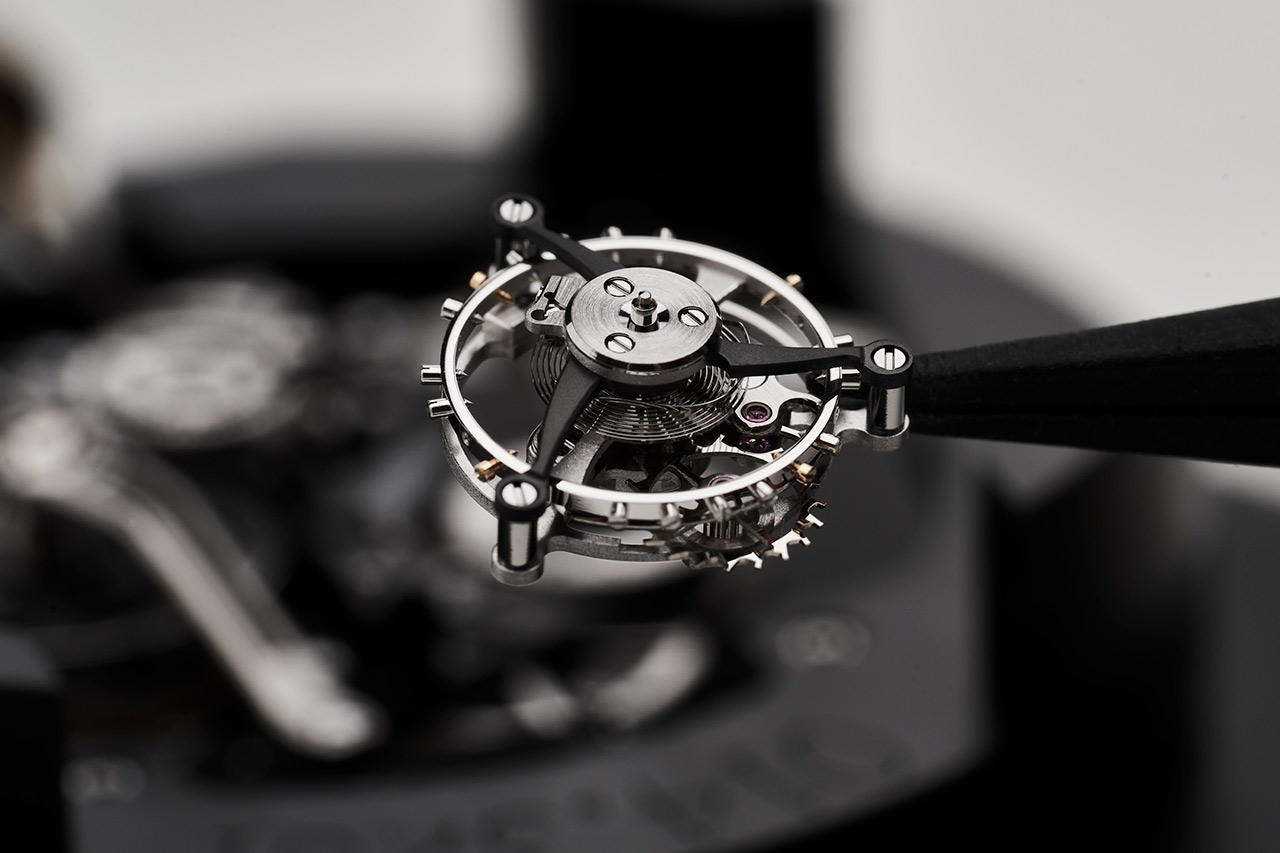 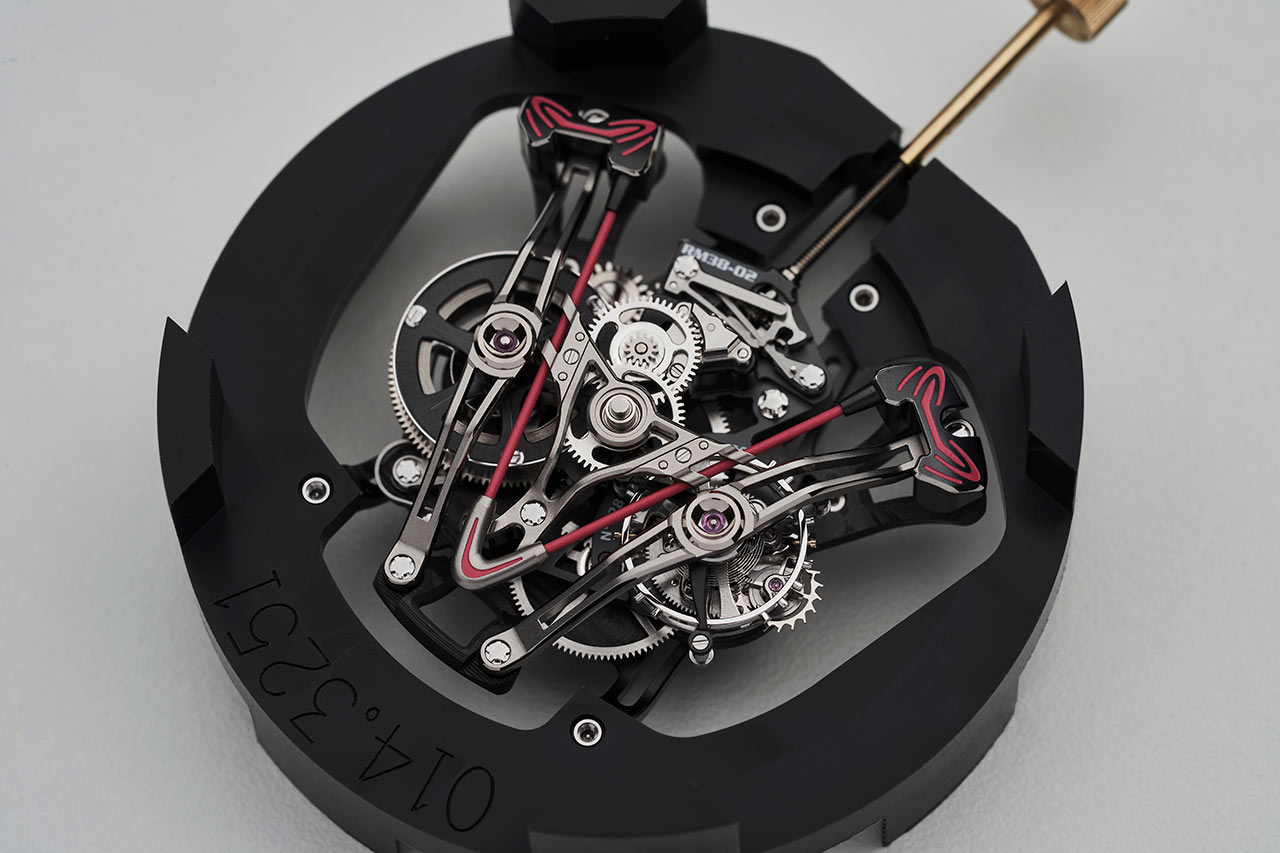 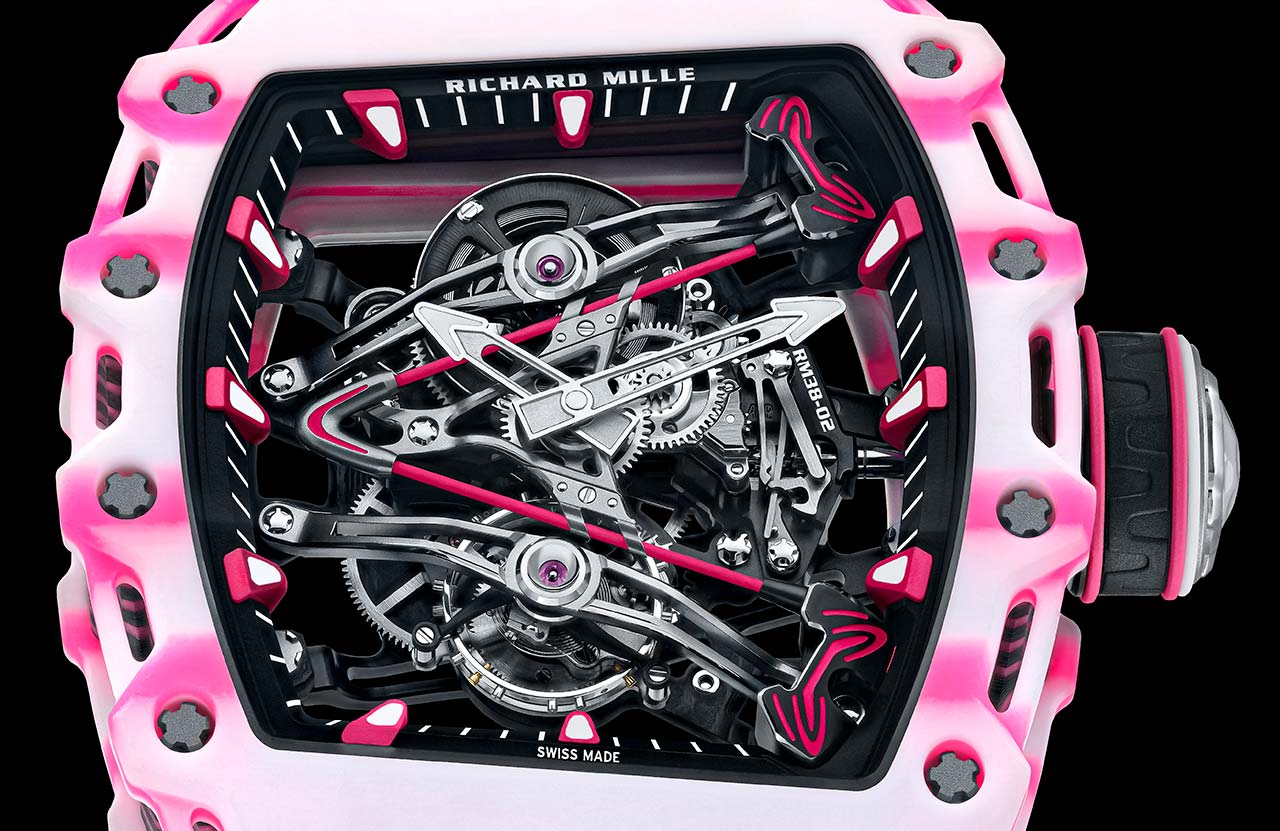 Touches of pink are also present on the back of the calibre on a micro-perforated bridge that echoes the pattern on the head of the driver Bubba employs in competition. 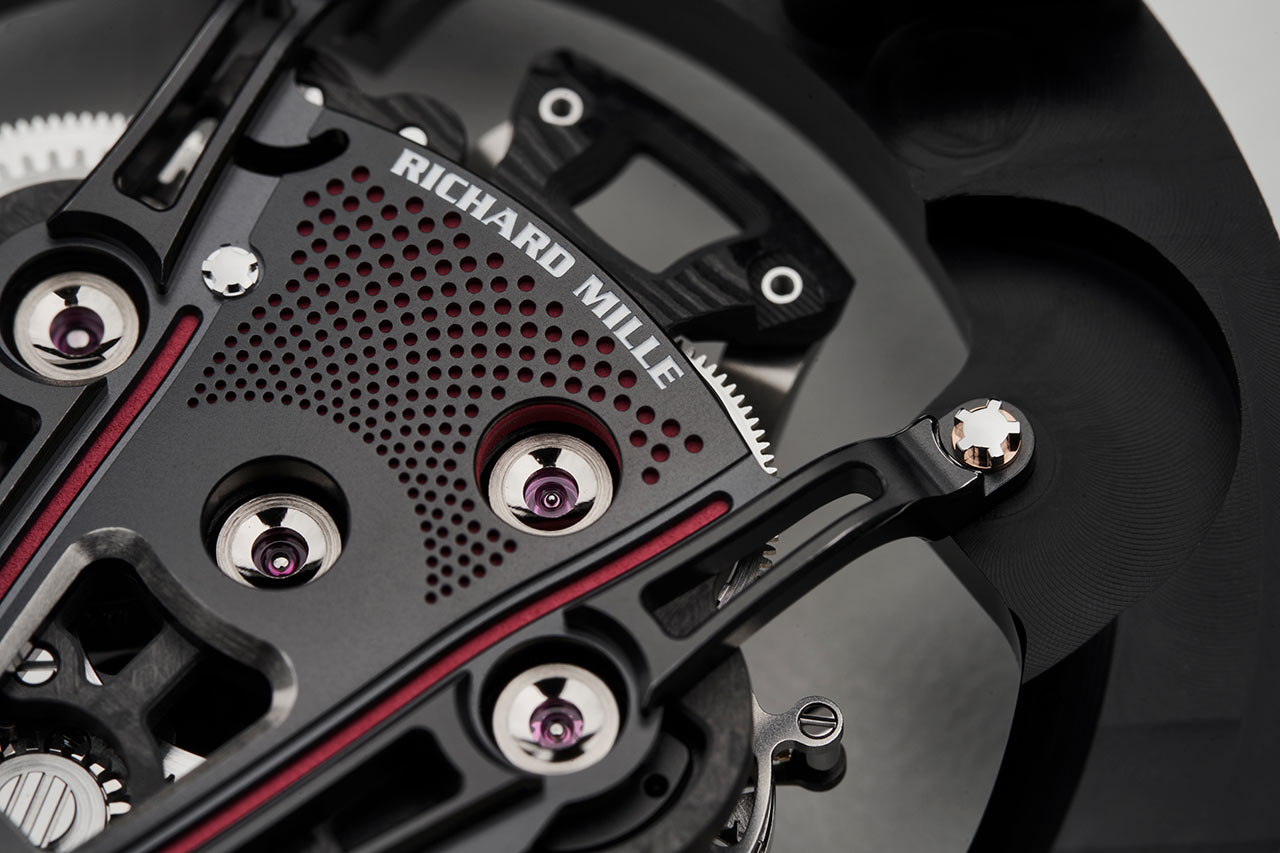 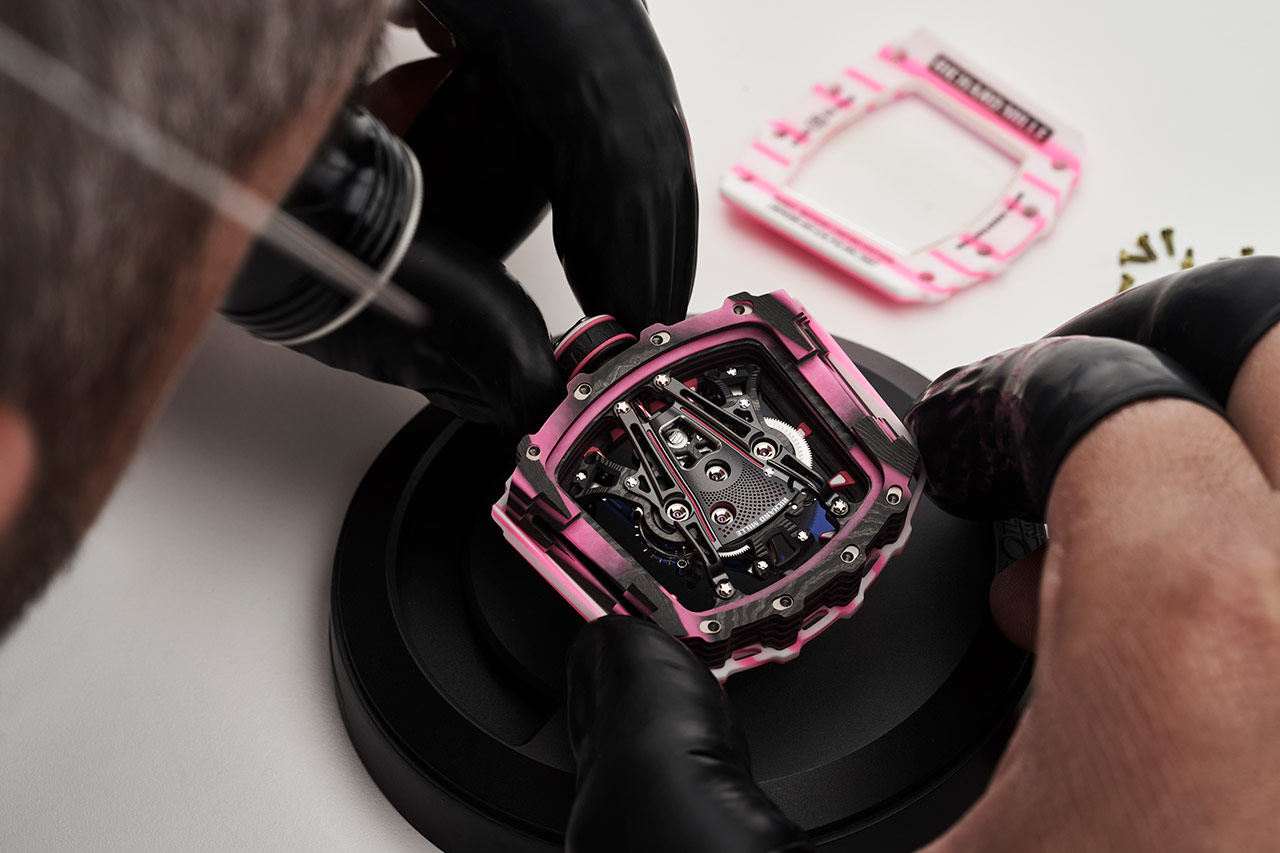 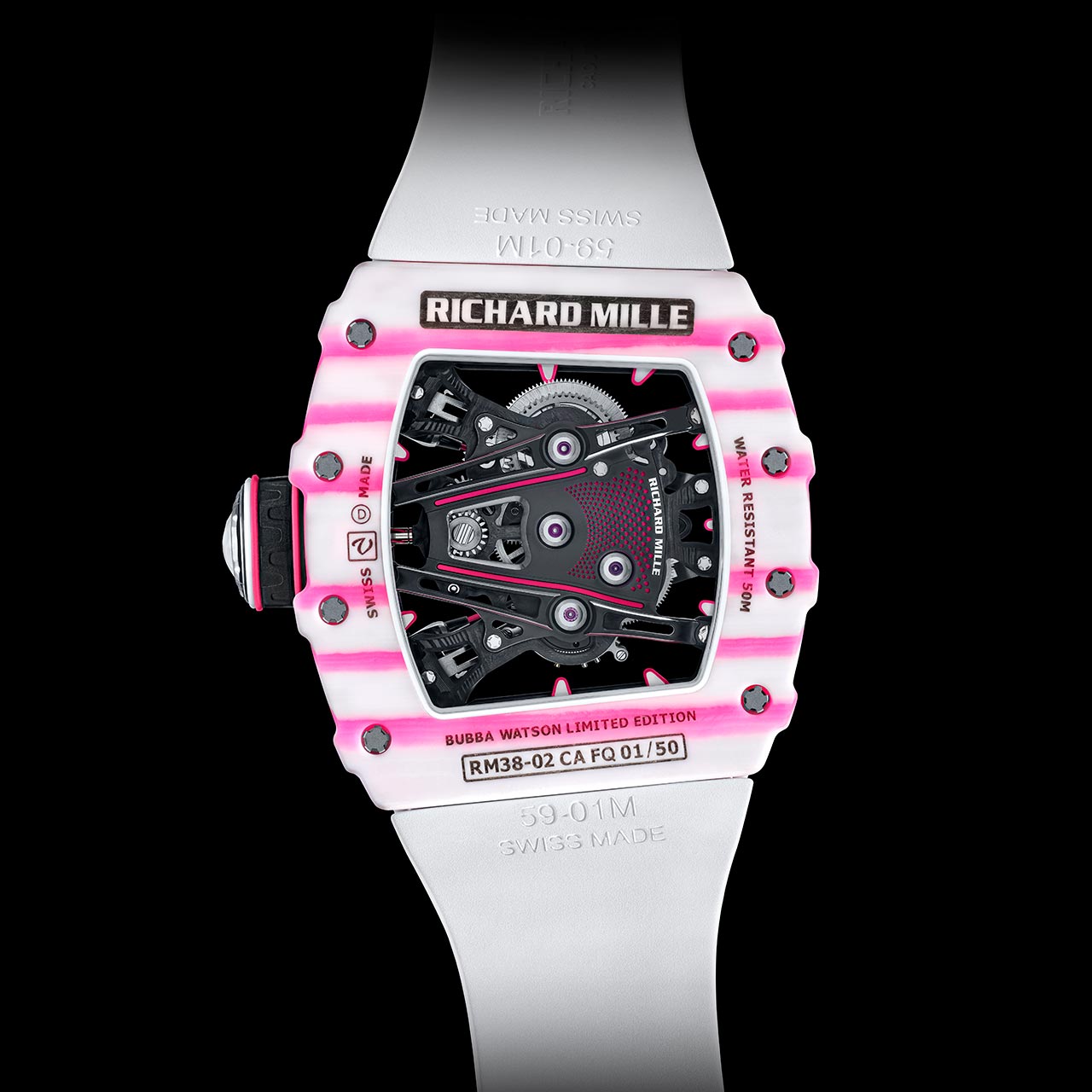 The caseband of the RM 38-02 holding in place the Carbon TPT baseplate is made of the same material, here combined with pink Quartz TPT fibres. It was no small technical challenge to combine the different colours and materials so subtly. The notches on the caseband visually extend the openings on the bezel. 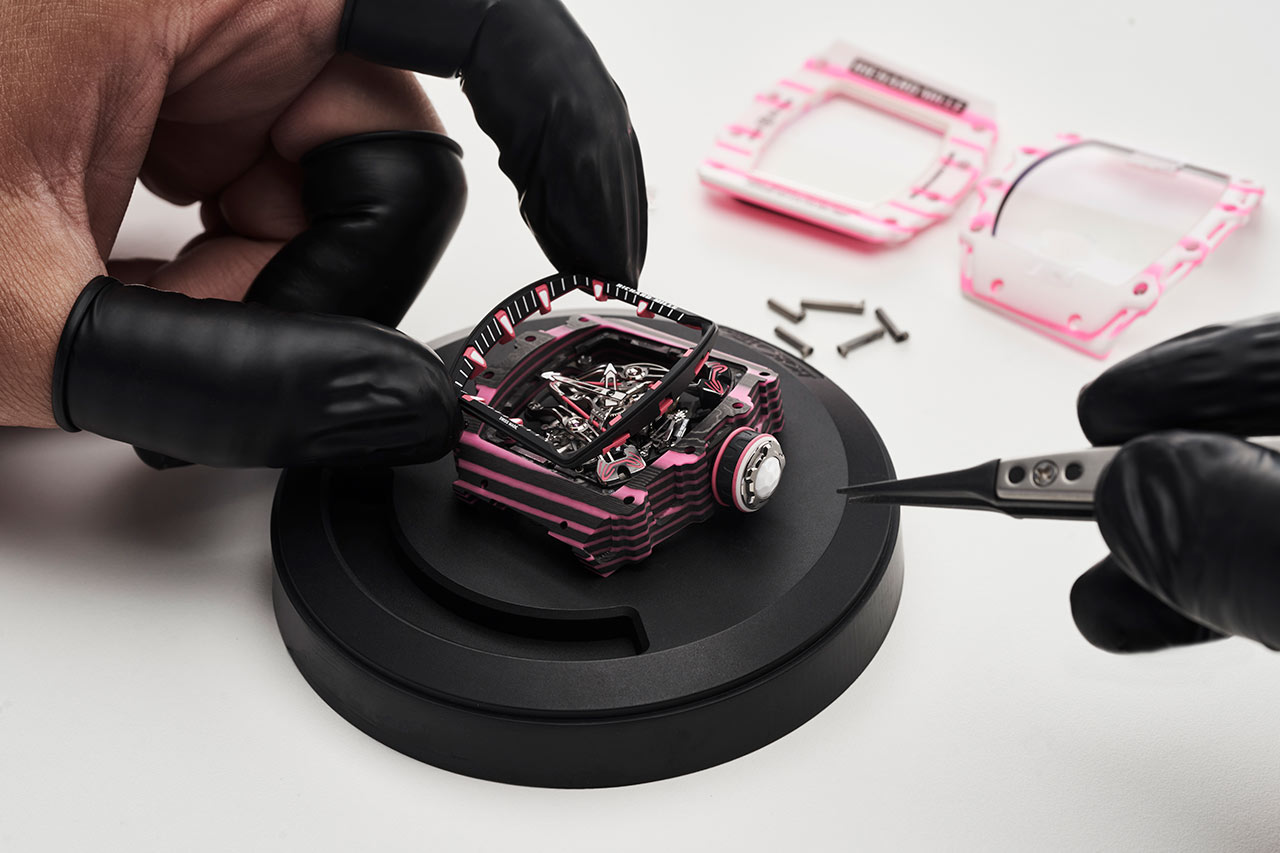 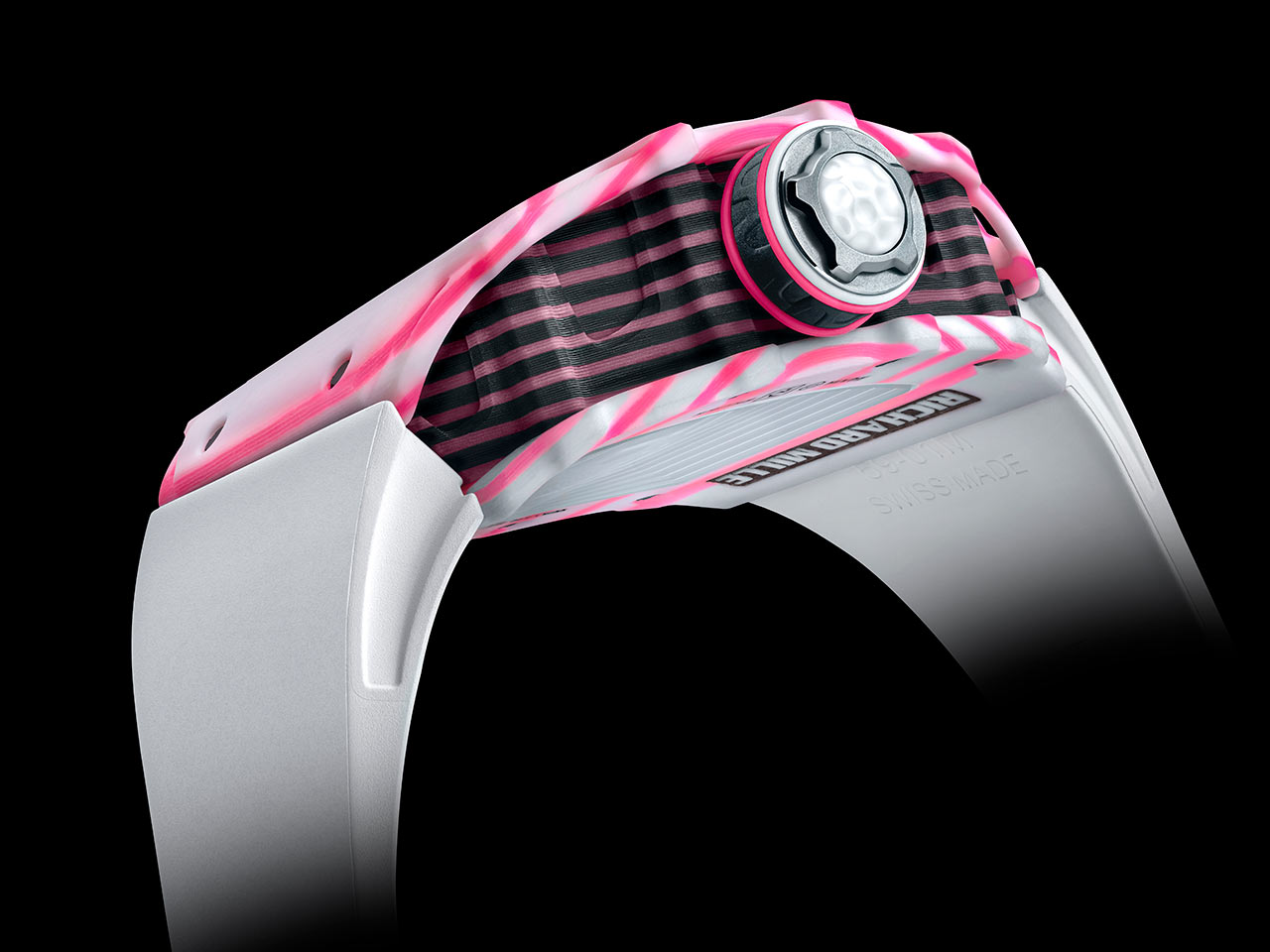 The asymmetrical shape of the 43.70 x 50.04 x 15.95 mm case ensures optimum comfort, preventing the dynamometric crown from rubbing against the wrist. Water resistance is ensured up to a pressure of 5 bars (50 metres / 165 feet) thanks to two Nitrile O-ring seals. 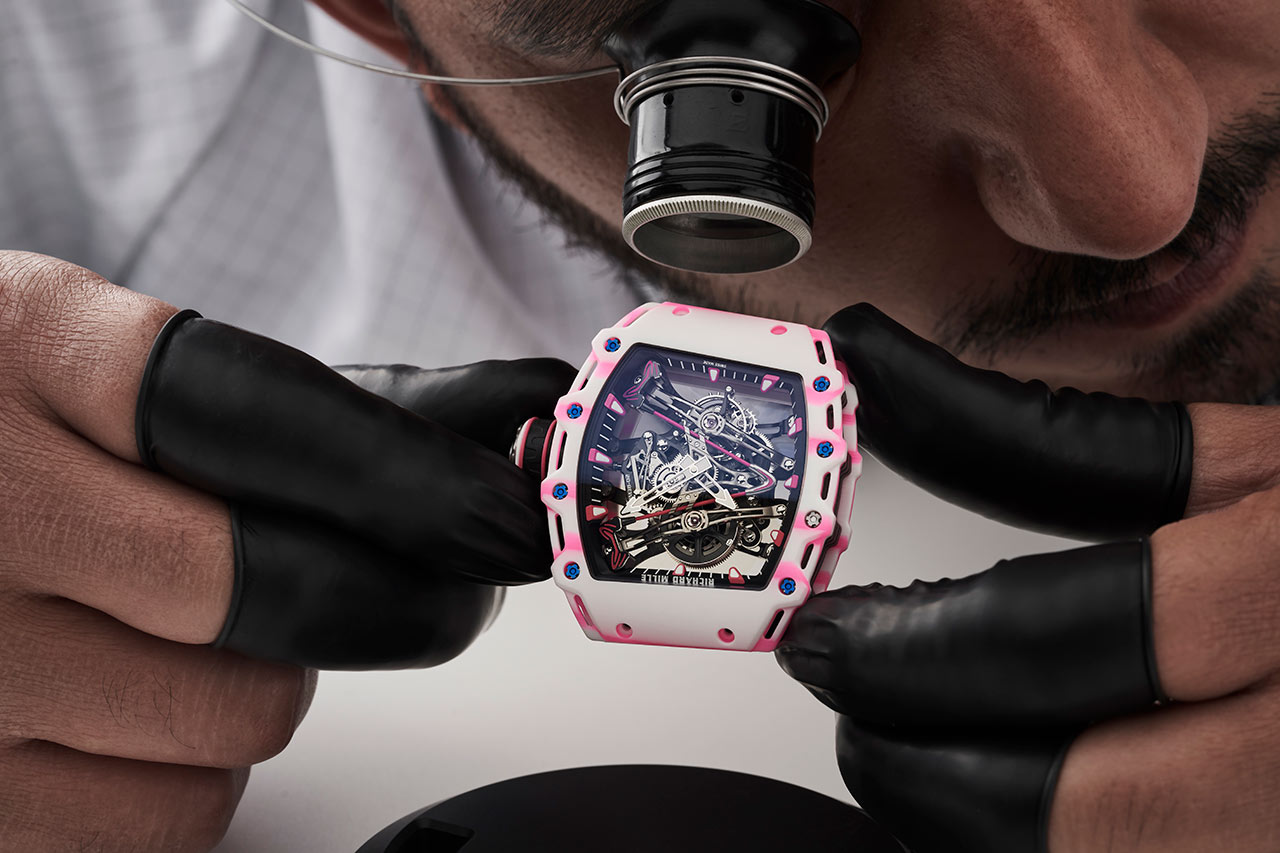 Beating a frequency of 21,600 vibrations per hour (3 Hz), the movement is equipped with a free-sprung balance with variable inertia, a mechanism that guarantees greater reliability when subjected to shock and also during movement assembly or disassembly, hence better chronometric results over time. The regulator index is eliminated and a more accurate and repeatable calibration is possible thanks to 4 small, adjustable screws located directly on the balance. 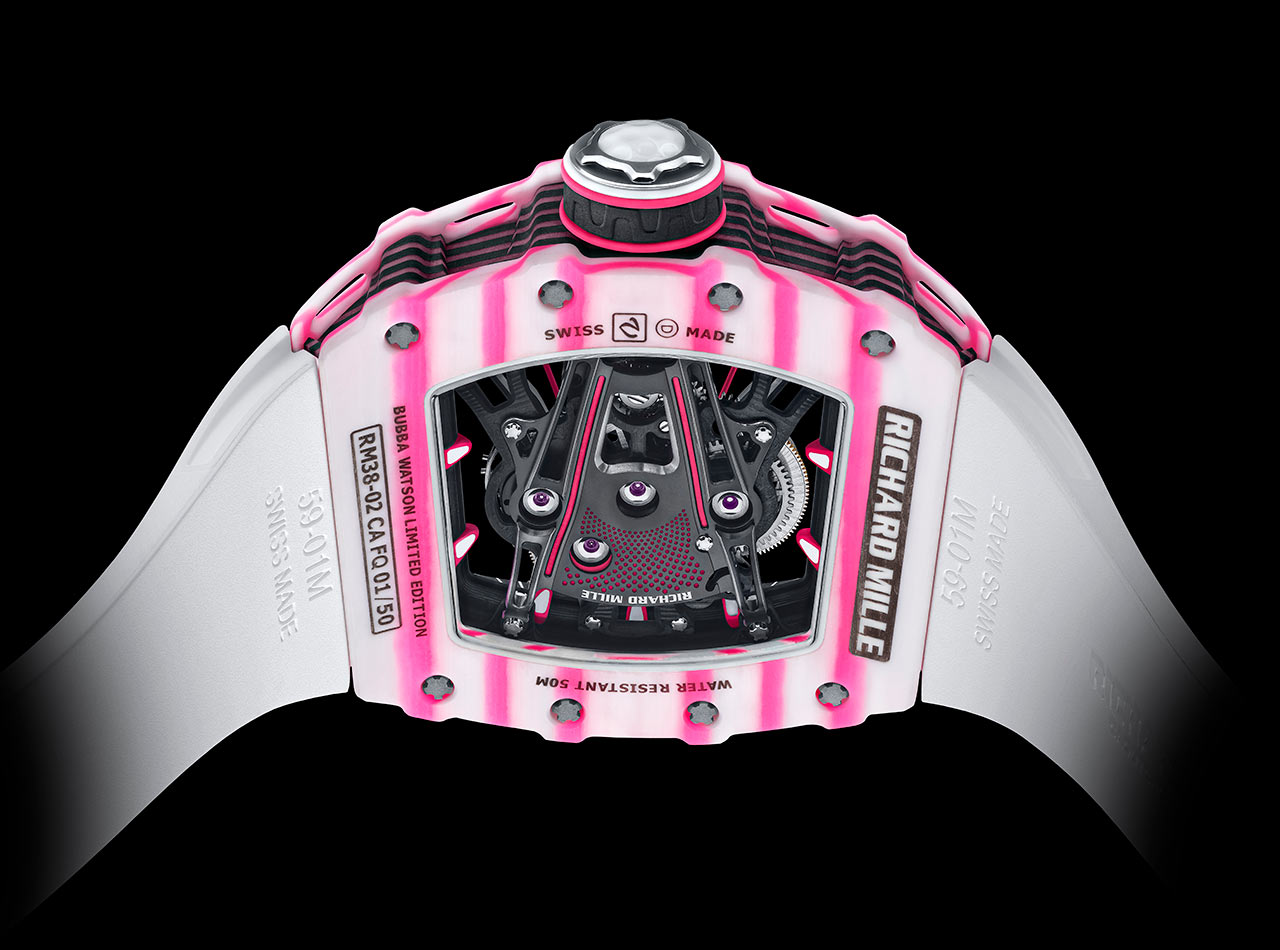 A fast-rotating barrel (6 hours per revolution instead of 7.5 hours for increased performance) guarantees a power reserve of circa 70 hours (±10%). The new Richard Mille RM 38-02 Tourbillon Bubba Watson is a limited edition of 50 pieces. The price is CHF 900,000 excluding sales taxes. Also don’t forget to check 10 most expensive watches. 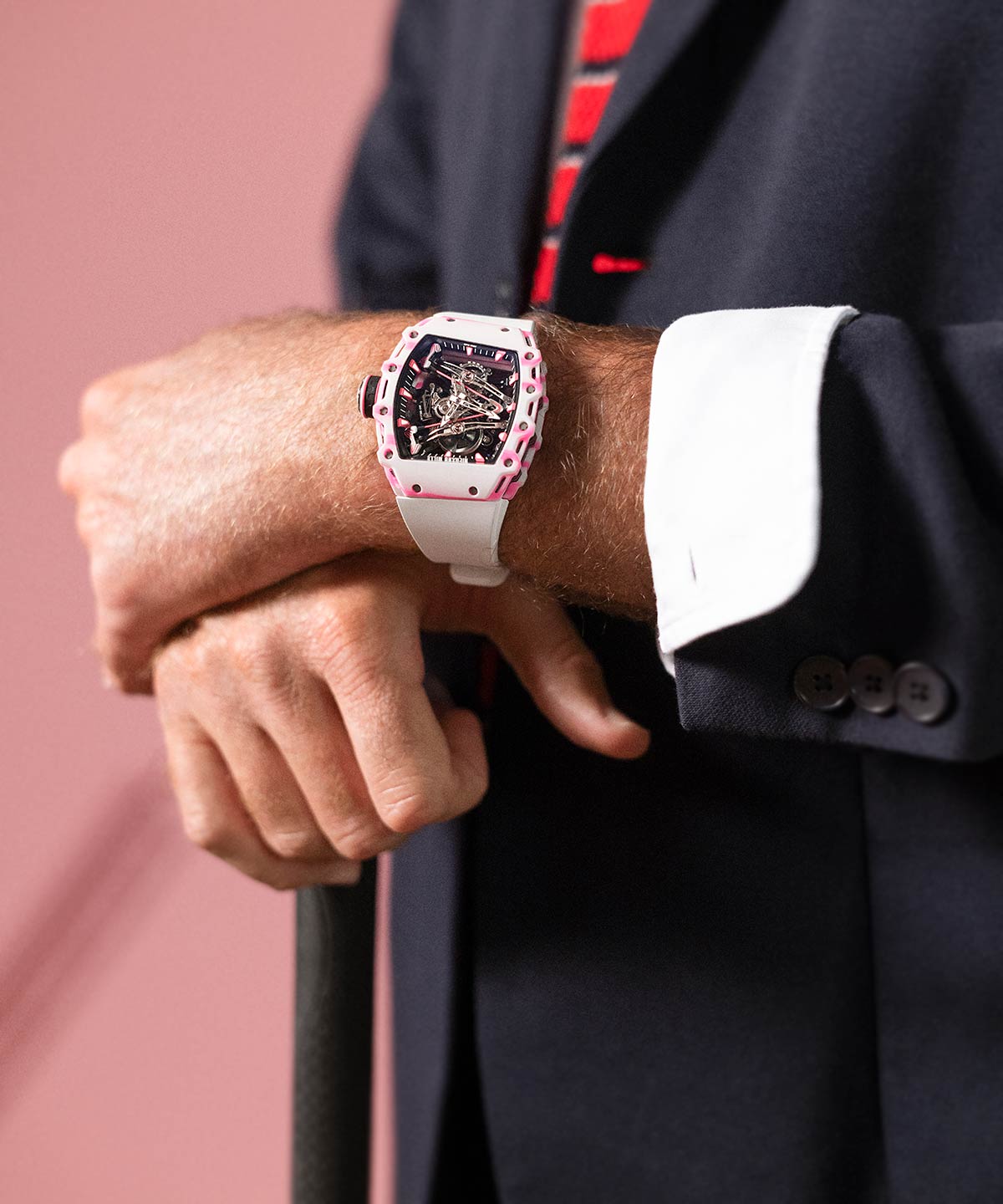