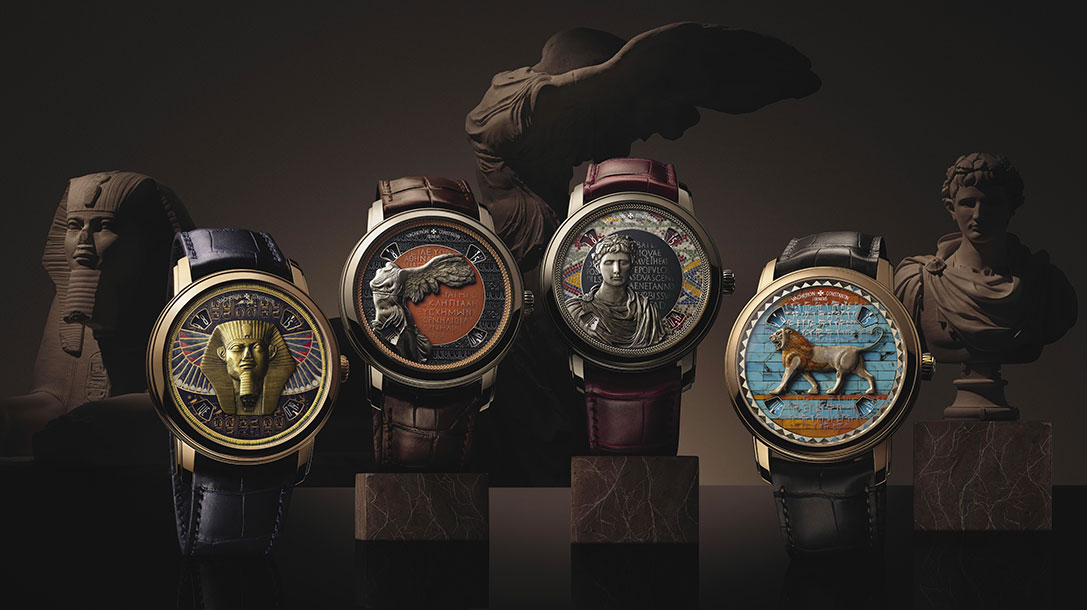 Announced in 2019, Vacheron Constantin‘s partnership with the Louvre has unveiled the Métiers d’Art Tribute to Great Civilisations, a quartet of watches featuring artisanal, micro-sculptures in a nod to bygone empires. Dubbed the “Tribute to Great Civilisations” series, it pays tribute to four of the most significant civilizations in human history. Each watch face depicts an iconic masterpiece from one of these civilizations, housed at the Louvre.

Each timepiece feels like a relic – a testament to Vacheron Constantin’s sheer craftsmanship in the way they’re put together. All four watches are powered by Vacheron’s self-winding Manufacture Calibre 2460 G4/2, a one-of-a-kind mechanism that lays out the watch’s hours, minutes, day, and date, leaving the center area open for the watch’s major work of art: its meticulously handcrafted artwork. The lack of a conventional movement is also logical, allowing the designs to shine without being distracted by any moving or ticking hands. The Sphinx of Egypt, the statue of Victory from Hellenistic Greece, the bust of Octavian Augustus from Julius Caesar’s Roman Empire, and the Lion relief sculpture from Darius’ Persian Empire are the four pieces in this collection.

In this carved gold applique representing a bust of Augustus, the drape of the cape worn by the first Roman emperor, fastened over his breast plate by a fibula, echoes the curling locks held in check by his oak crown. The centre of the dial in blue-green enamel is surrounded by a stone micro-mosaic of patterns taken from a fourth-century Roman mosaic that was found in Lod, Israel. The 660 fragments are cut from seven types of stone. Around the very outer edge of the dial, a line-engraved frieze in white gold, patinated in the kiln, references a fourth-century mosaic of animals playing musical instruments that was found in Sousse, a port city in eastern Tunisia. 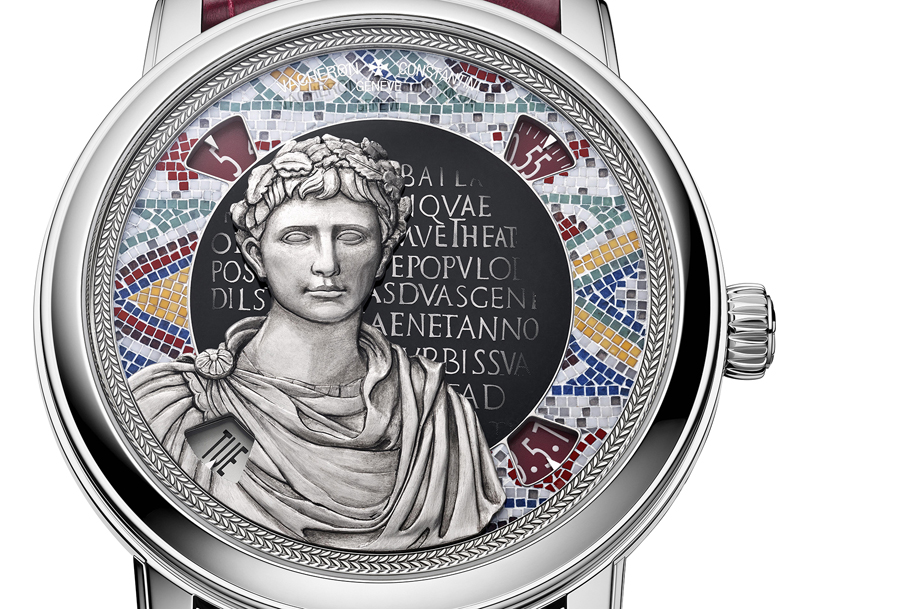 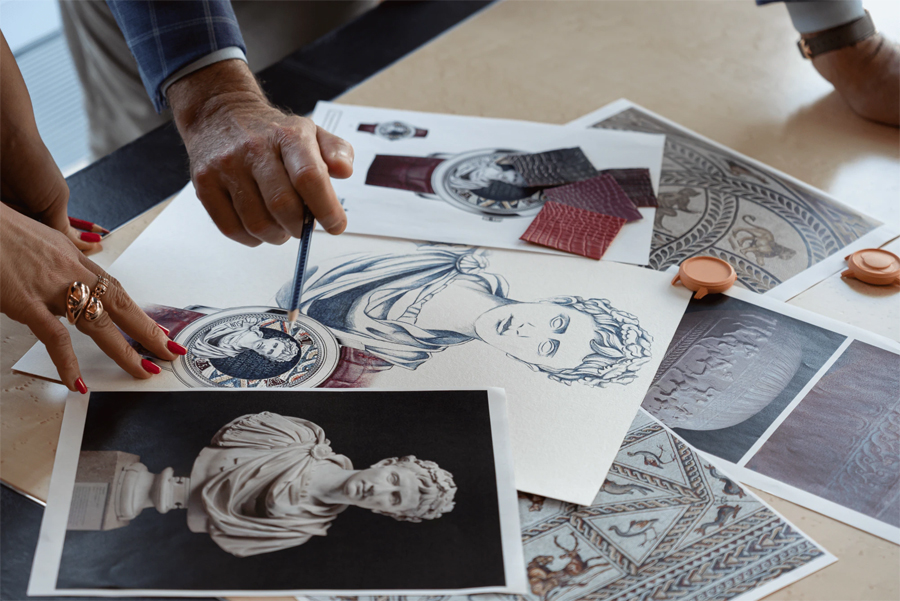 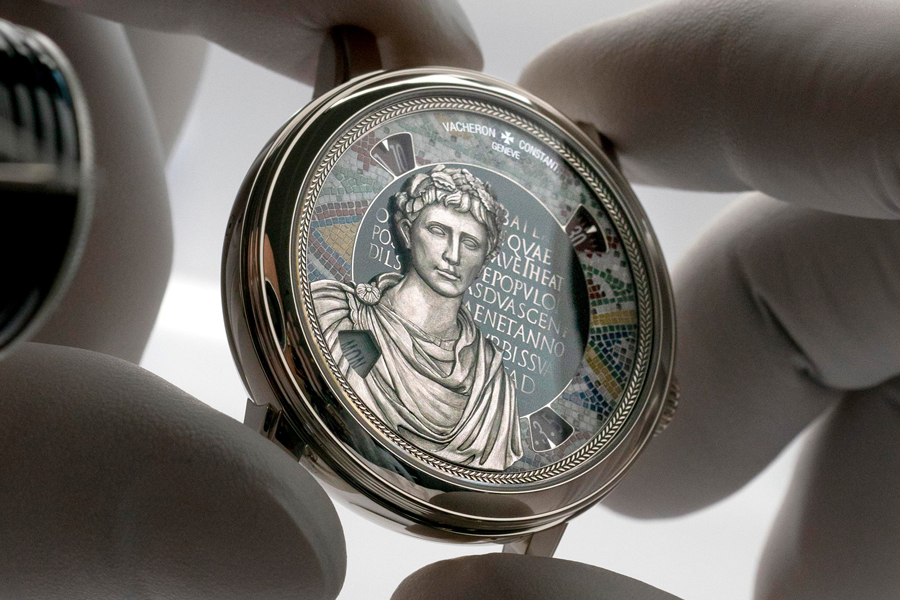 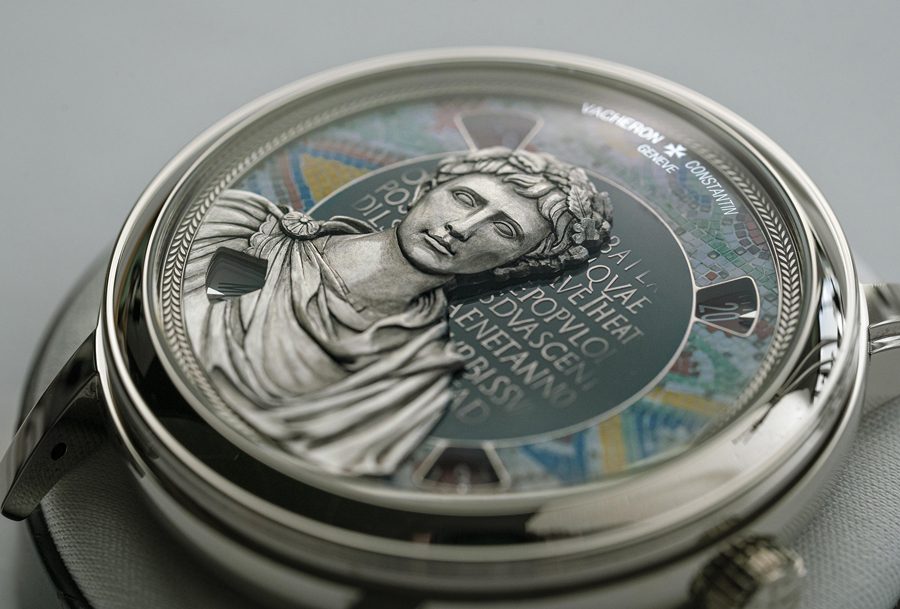 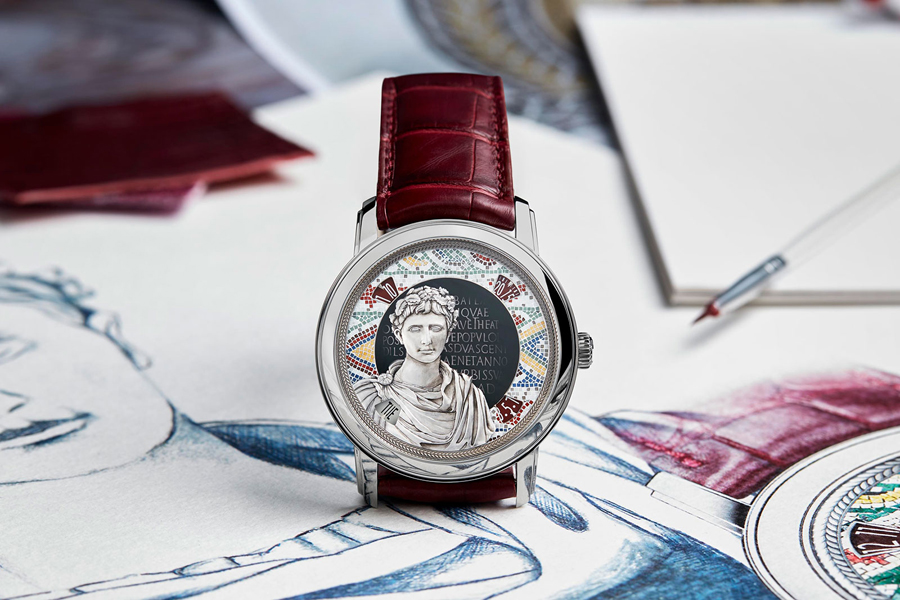 The greatest challenge for the engraver tasked with reproducing the subtleties of this statue in white Parian marble was to imitate the drapery that falls in deep folds between the legs of the goddess Nike. The brown enamel of the dial’s centre is achieved by mixing rare enamels – so rare they are no longer produced – which are then fired six times in the kiln. A band of grisaille enamel around the centre references decorative friezes from two Greek vases whose foliage and geometric motifs are transposed here. At the very outer edge of the dial is a line-engraved gold frieze, inspired by the bas-relief sculpting on a marble vase from Pergamon, from the first century BC. 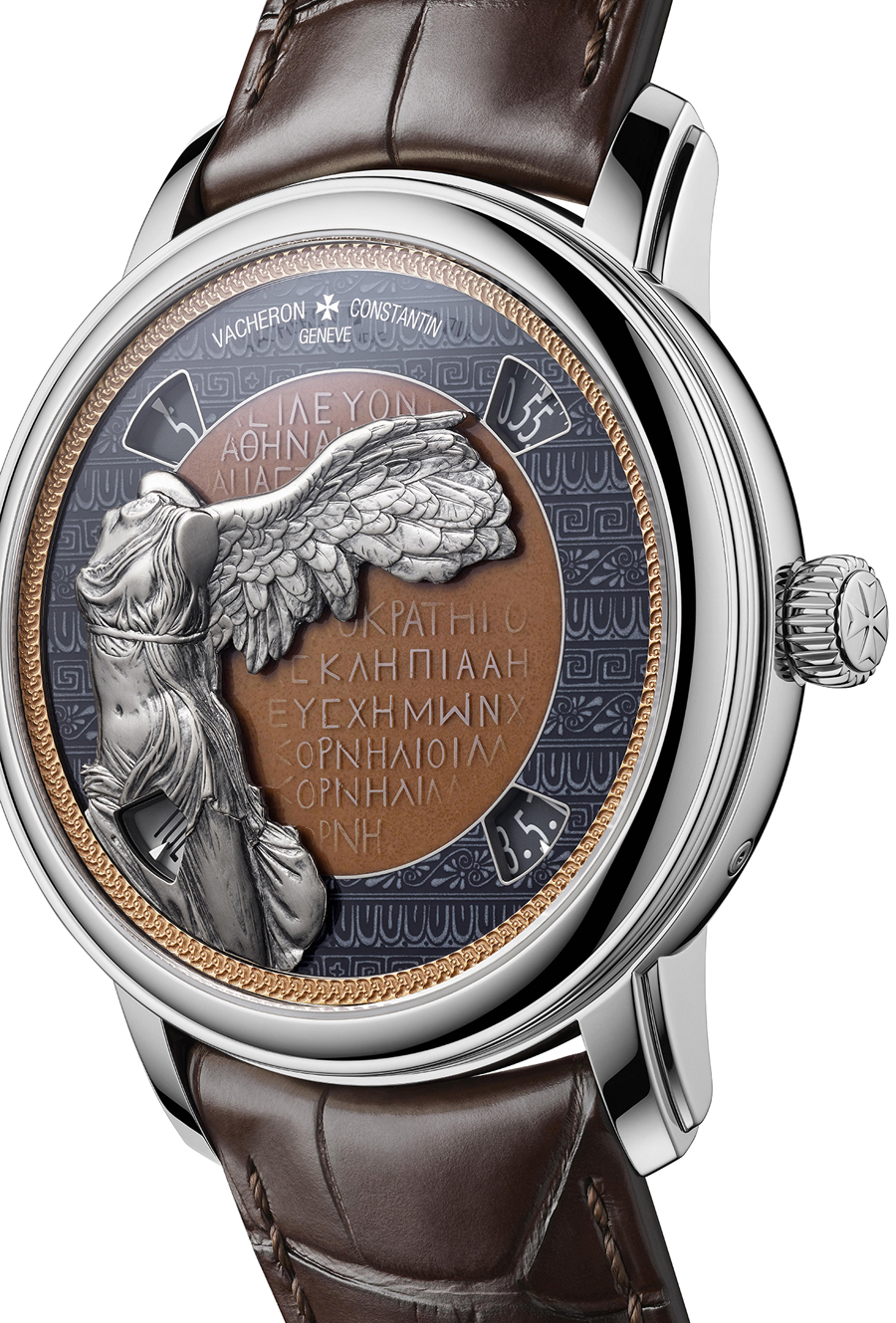 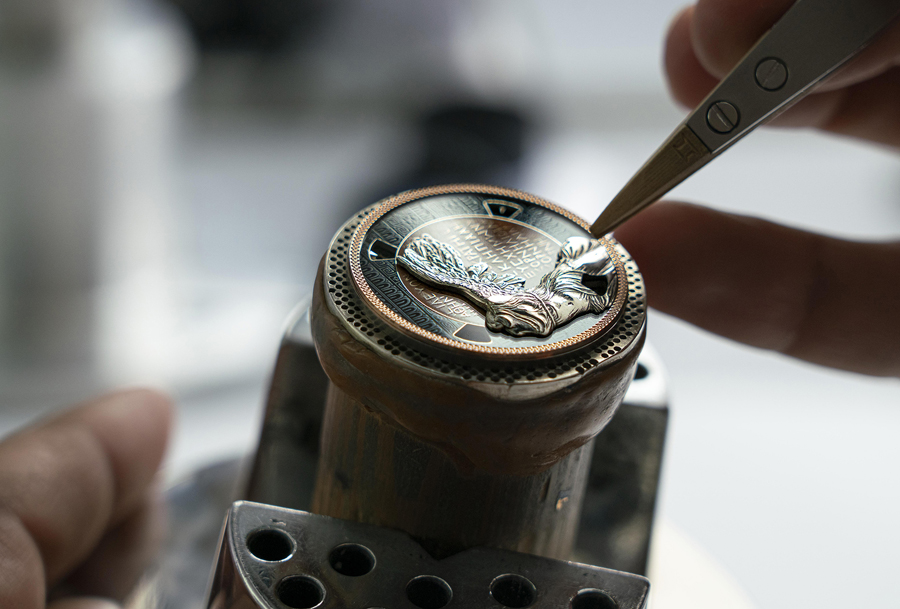 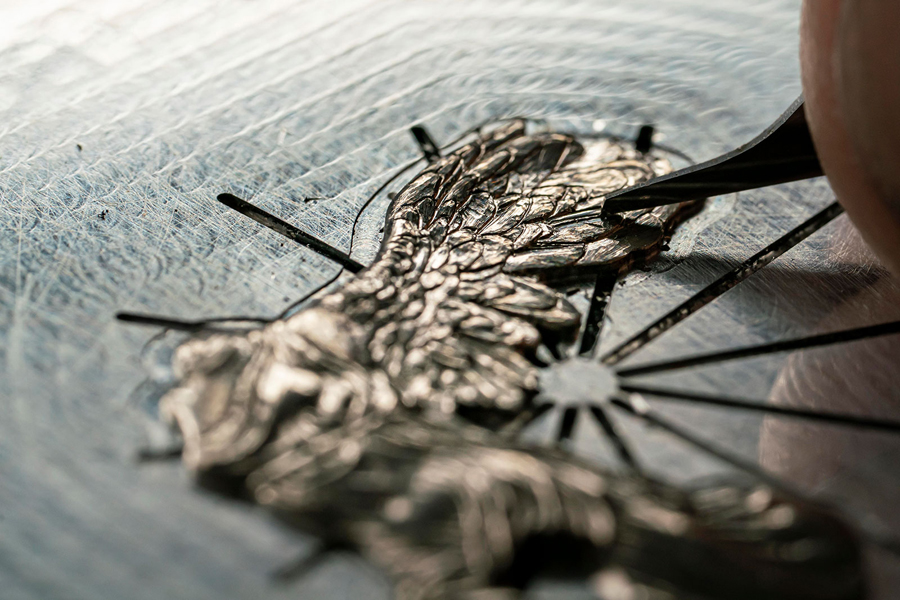 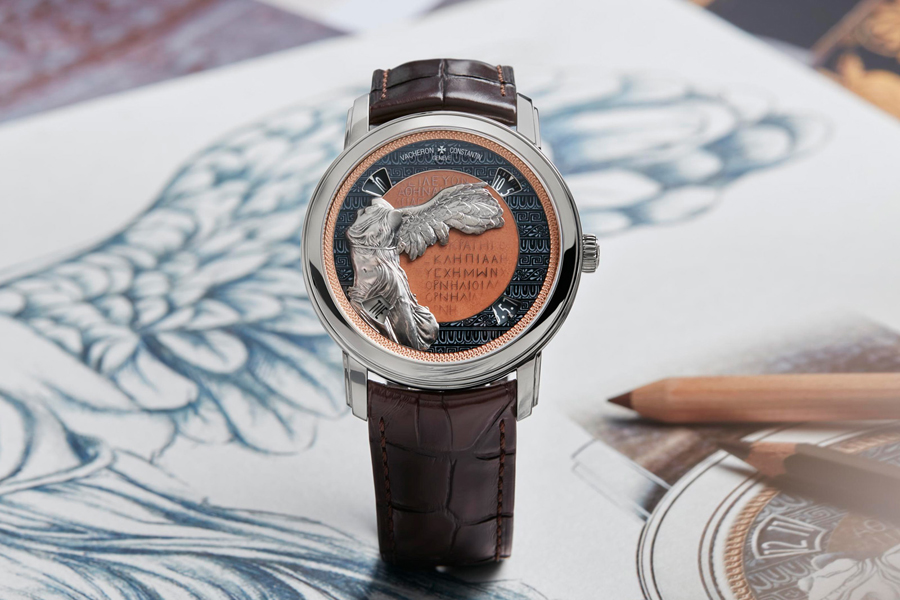 One of the most remarkable features of the lions on the frieze that adorned the Palace of Darius is the advanced stylisation of their muscles and fur, which this sculpted applique realistically reproduces. To illustrate the fact that the lion is part of a frieze on a wall, the background represents glazed bricks. Vacheron Constantin’s artisans achieved this decoration with a stone marquetry whose 69 components are all different in appearance and size. They specifically selected stone fragments that displayed veins, despite their greater fragility, knowing that this would produce a more realistic rendering. The frieze surrounding the dial borrows from another well-known work from the Palace of Darius: the Frieze of Archers. This juxtaposition of triangles is made of engraved metal and champlevé enamel with “ageing” inclusions. 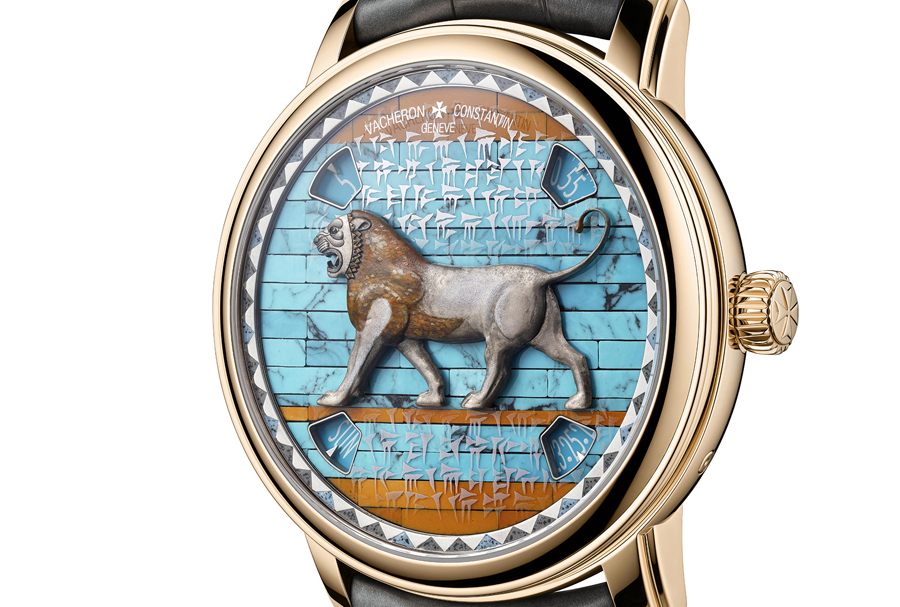 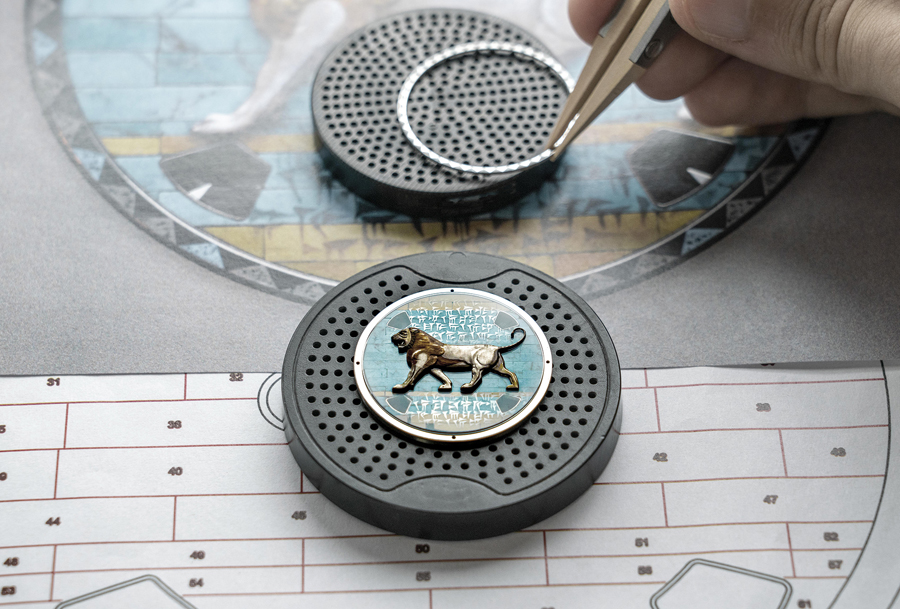 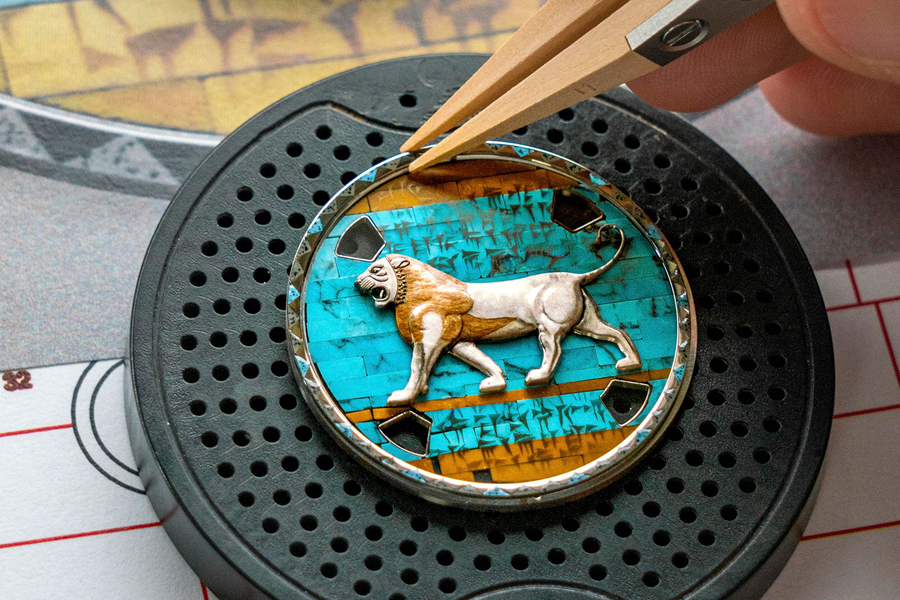 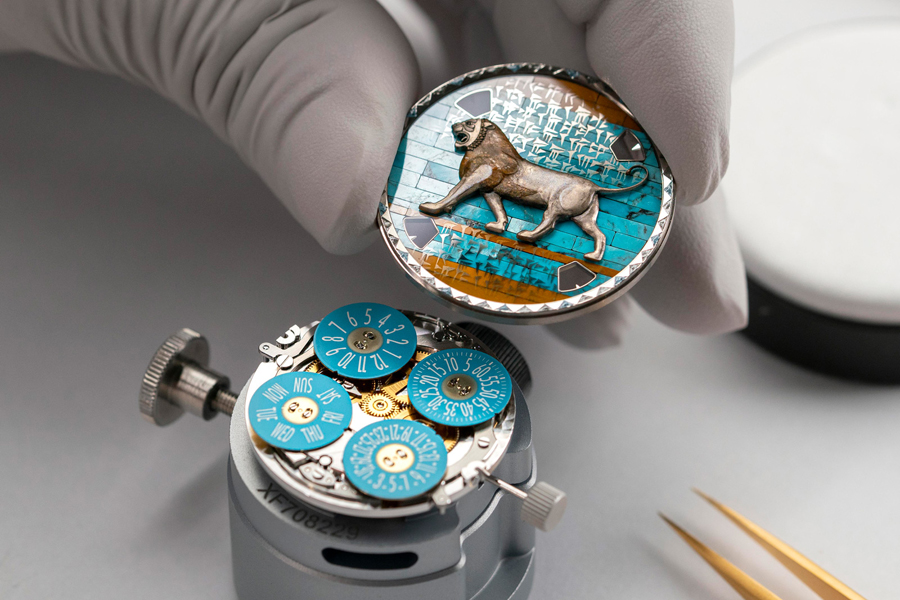 One of the difficulties when engraving the carved gold applique of the sphinx’s head, in addition to creating the relief of the face, was to render the large false beard within such small confines. The deep colour of the dial, a mixture of blue and black enamels, is the result of six firings in the kiln. The dial elements are inspired by images of the deceased in his shroud adorned with colourful protective motifs. His chest is covered by an imposing necklace of geometric and floral designs. It has been reproduced on the dial in champlevé enamel. Inclusions incorporated into the enamel give the outer frieze its aged appearance. Beneath the necklace is a winged hawk with a ram’s head. The plumage of the bird’s wings is carried over onto the dial, again in champlevé enamel. 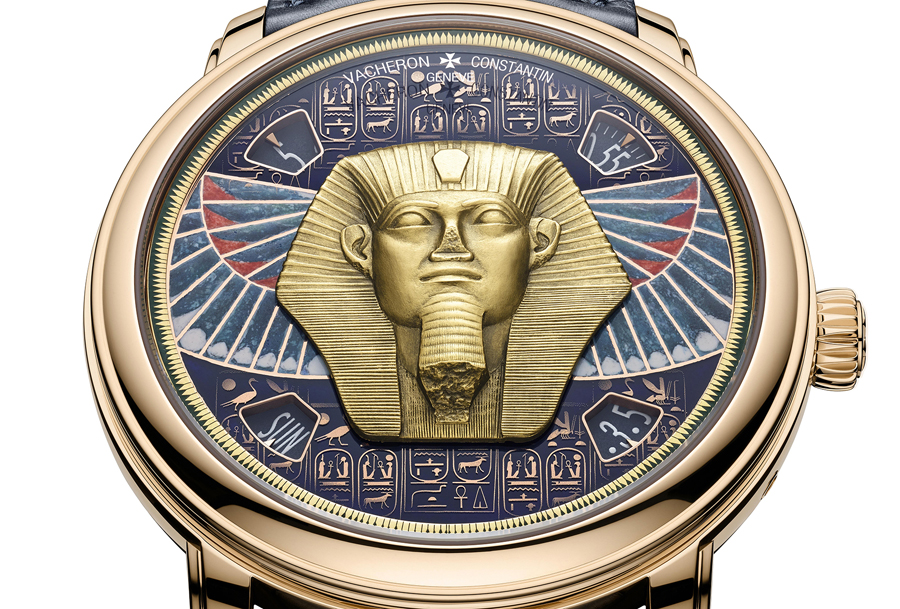 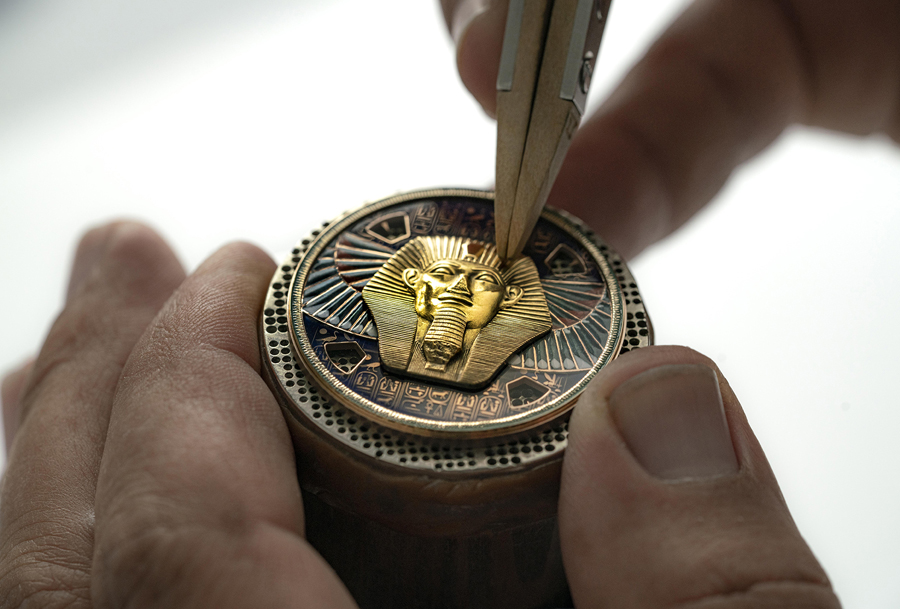 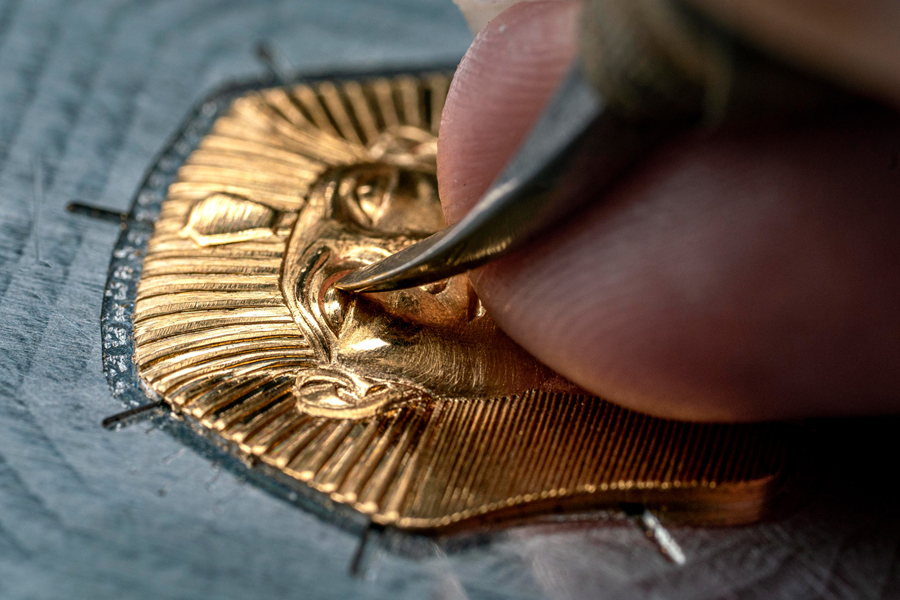 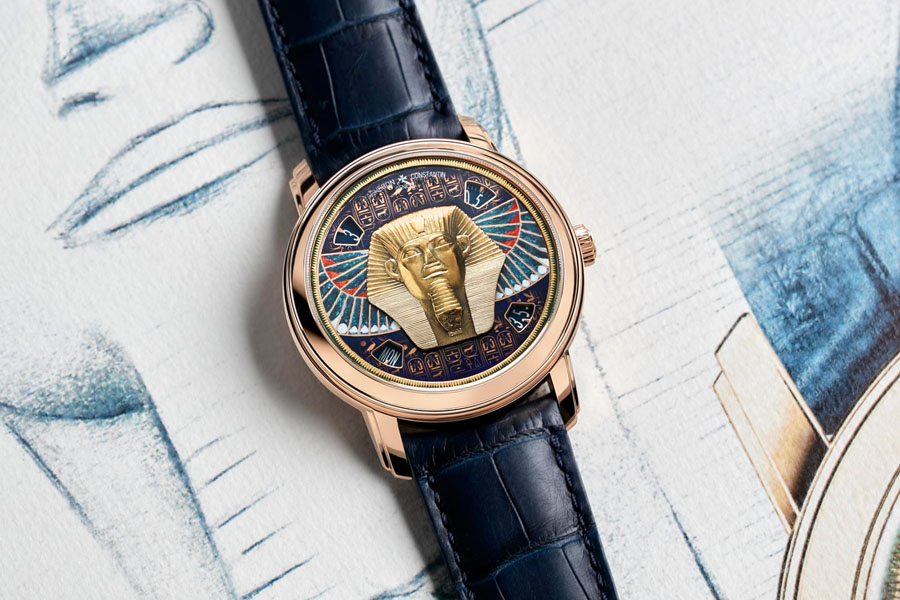 Each of the timepieces is limited to just five pieces, given that they’re all entirely made by hand. The price of the watches has not yet been revealed, but such exquisite artistry will undoubtedly be pricey. The timepieces are only accessible in Vacheron Constantin boutiques. Meanwhile be sure to check the most expensive watches in the world.