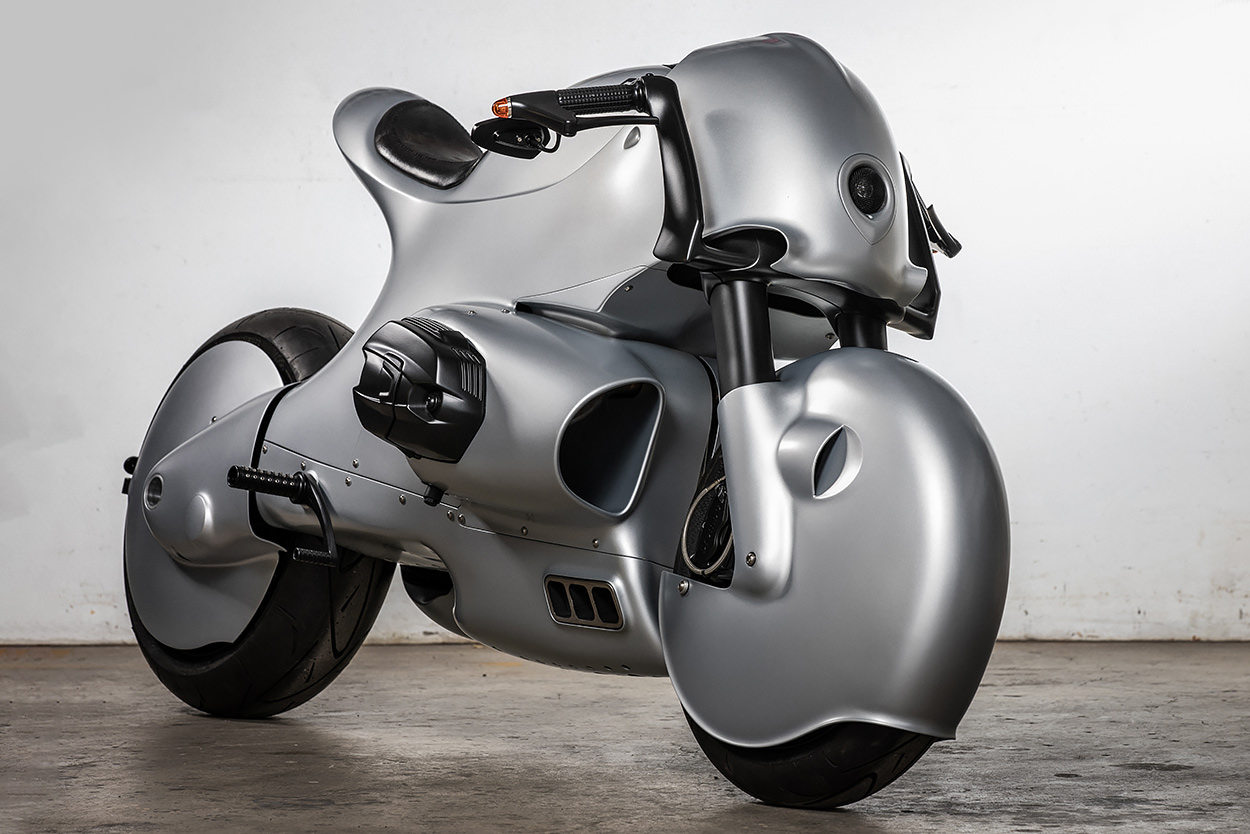 This aircraft-inspired BMW R nineT is the work of Wayne Buys, who works out of his home garage as FabMan Creations. It’s shrouded in aluminum bodywork that Wayne built by hand, using a homemade English wheel. It’s probably also worth noting that he worked freeform, without a single sketch, render or template – and that his metal-shaping skills are self-taught. 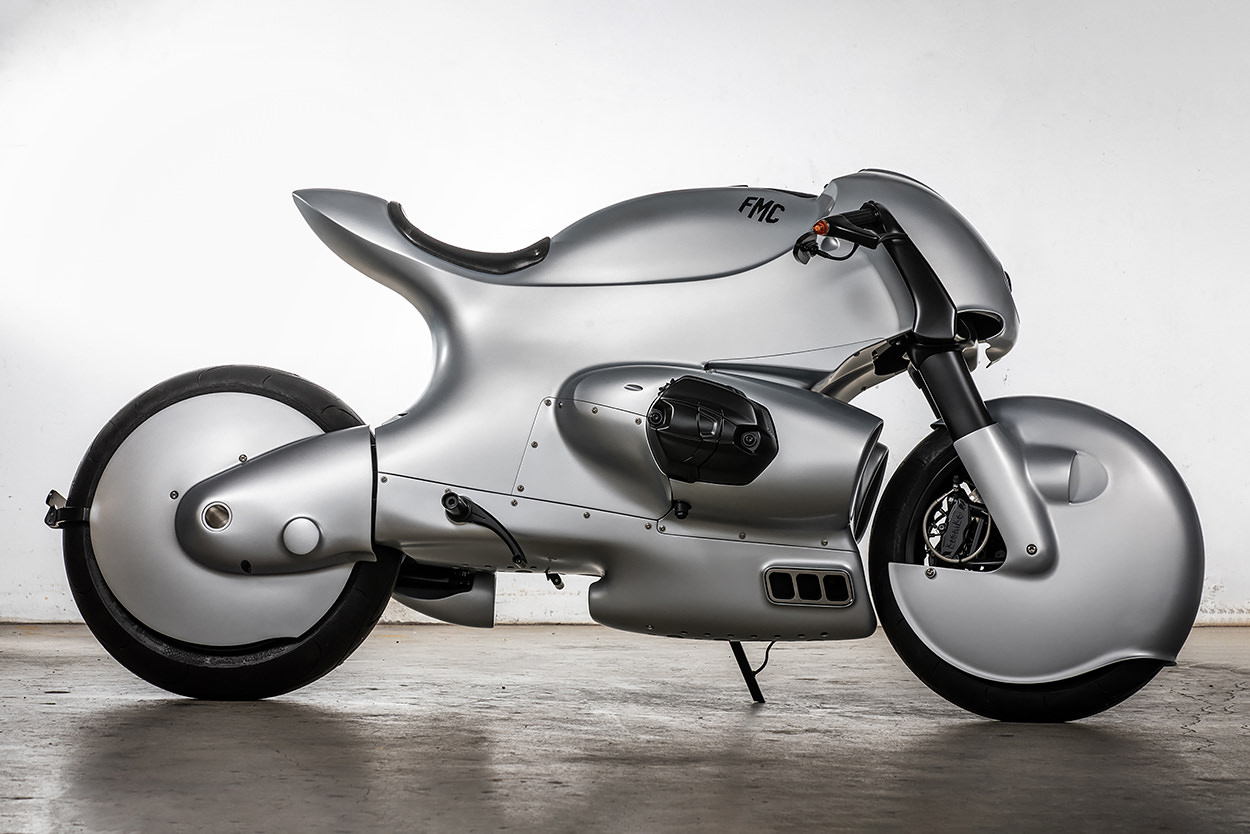 This R nineT was commissioned by a client, who supplied a low-mileage R nineT and specified the aeronautical theme. Most of the stock bike still remains under the aluminum, but that doesn’t mean that this was an easy win. Wayne had to figure out some clever workarounds to put it together, and it took him 8 months to wrap up. 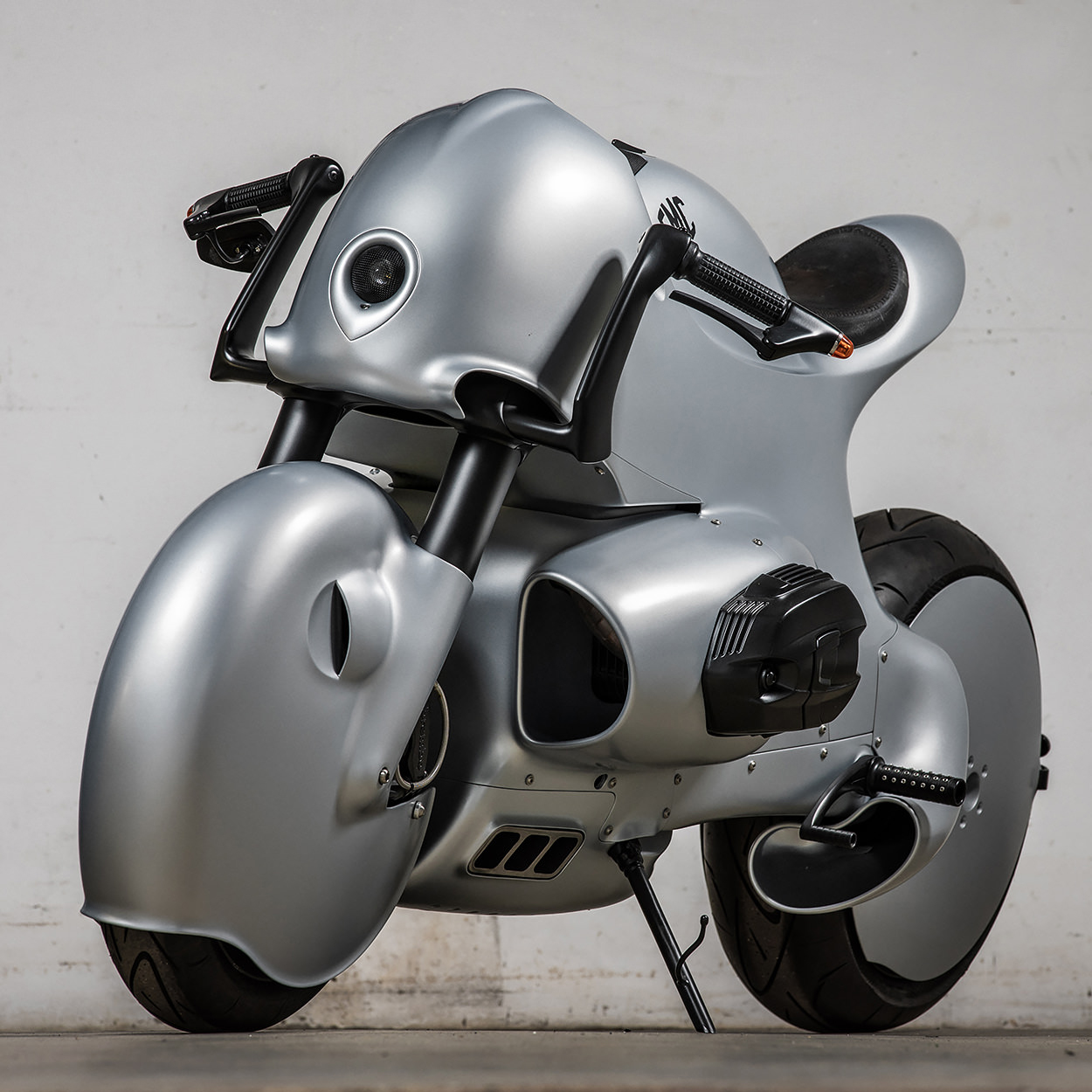 The whole bike assembles like a Meccano set. The upper shell secures to a hidden aluminum fuel cell, via a locking nut around the gas cap. There’s another fastener hidden under the seat pad, with extra attachment points up front. 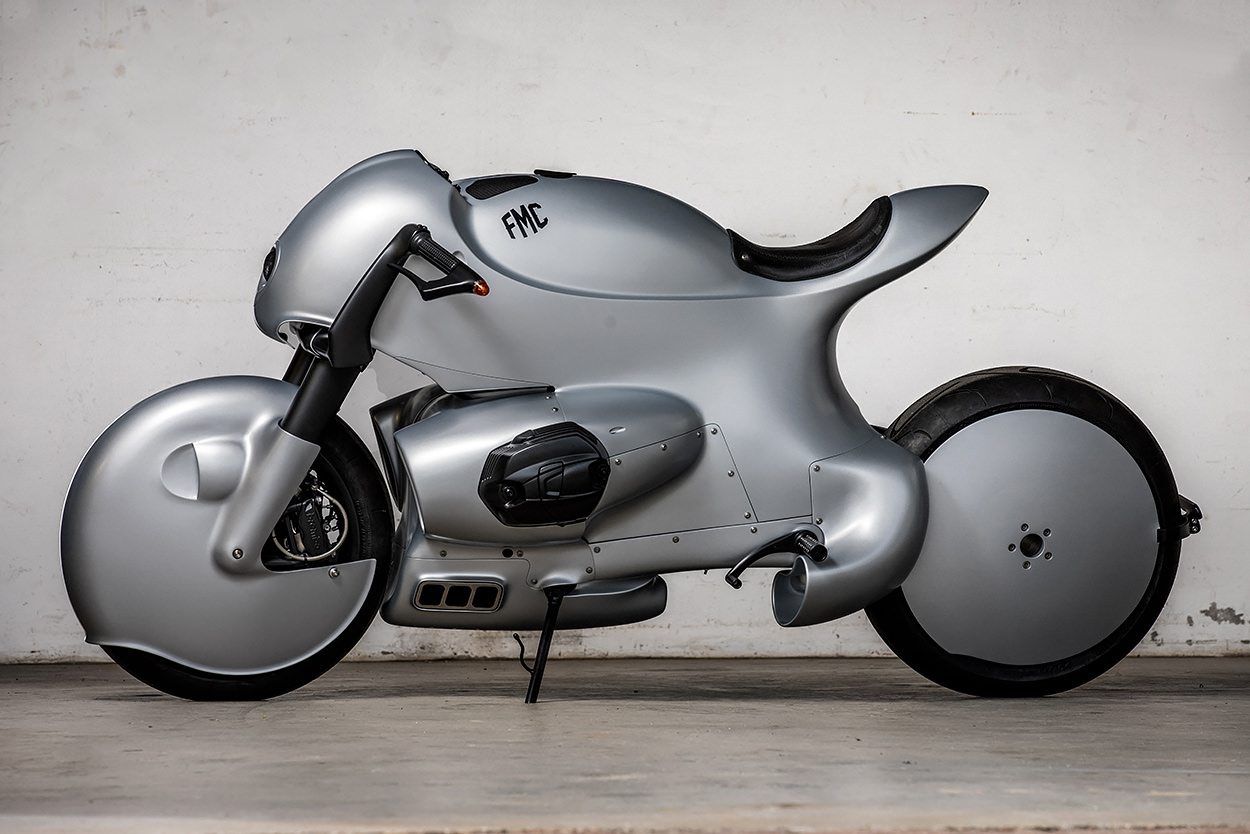 Wayne trimmed the frame around the upper shock mount to accommodate the new tail section, and moved the foot peg brackets further back. Custom foot pegs ‘pinch’ the belly pan to hold it in place, with four bolts below the bike to secure it. 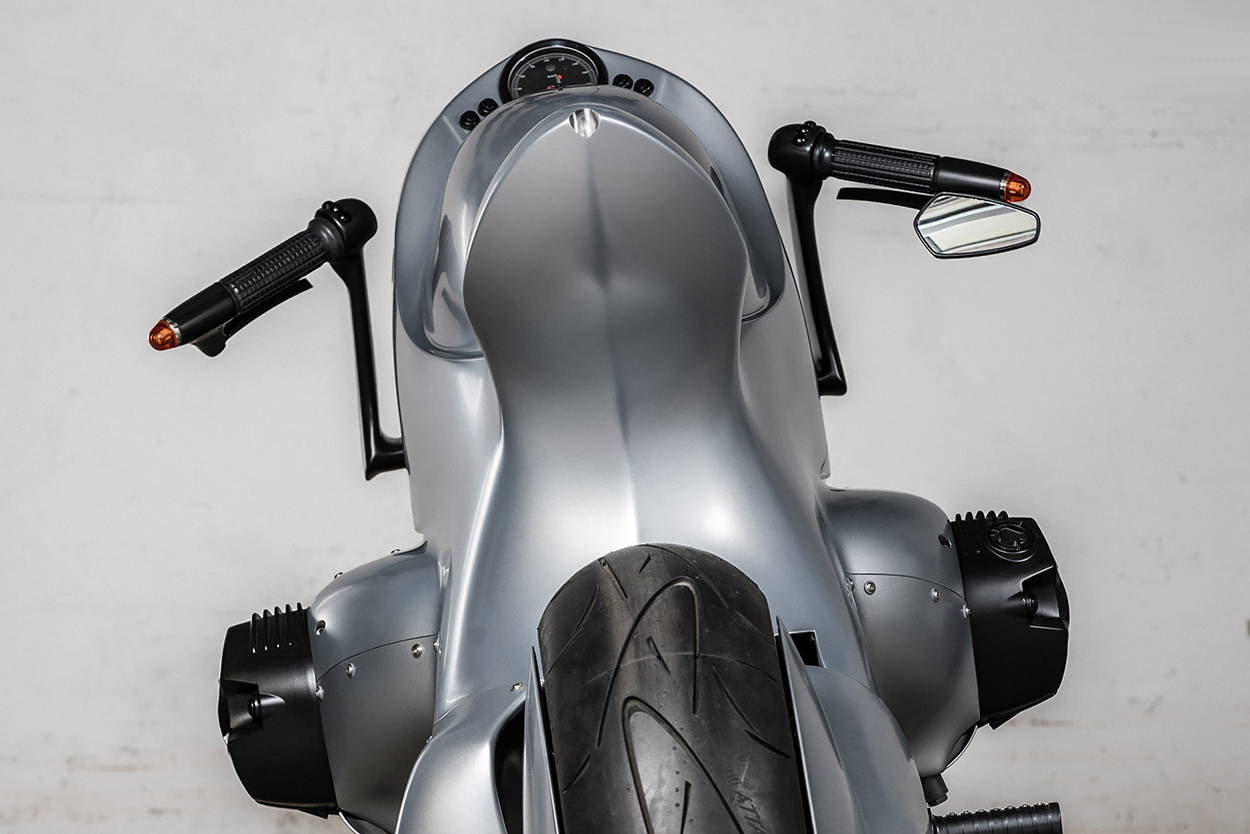 Each body panel interlocks with the next, connected via small allen head fasteners that mimic the rivets you’d find on aircraft. The various scoops and air intakes aren’t just for show either; each one directs air to a crucial part of the bike, like the massive side ducts that keep the boxer motor cool. 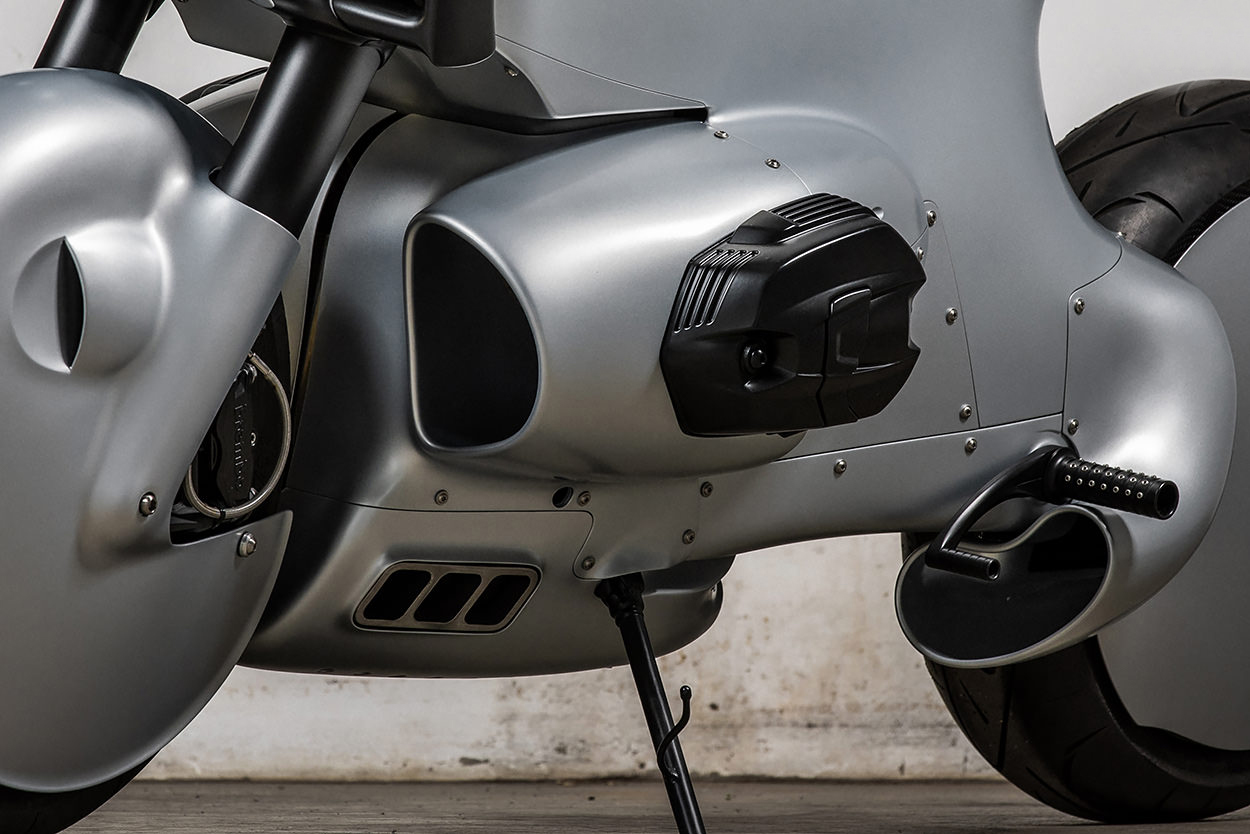 Two small intakes on either side of the fully-enclosed front fender direct air to the brakes, while a scooped intake at the back of the bike, equipped with a fan, helps to chill the repositioned oil cooler. There’s another fan up front to cool the electronics, which all sit under the tank cover. And there are mesh panels up top to help hot air escape. 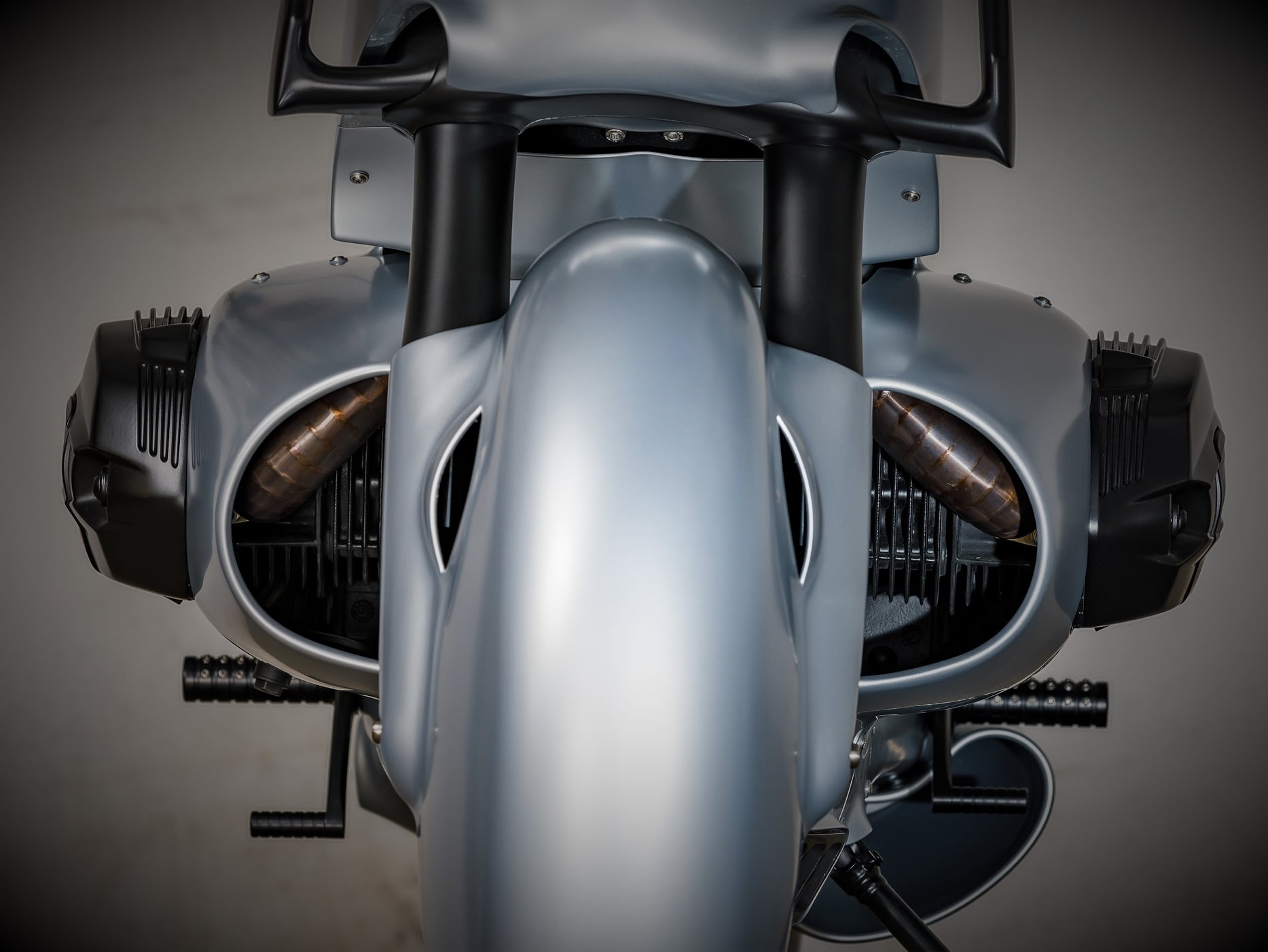 The exhaust is particularly stealthy. The headers are hidden from sight, exiting via three ports on either side of the belly pan. A grid of holes underneath the headers help stop hot air from pooling up inside. 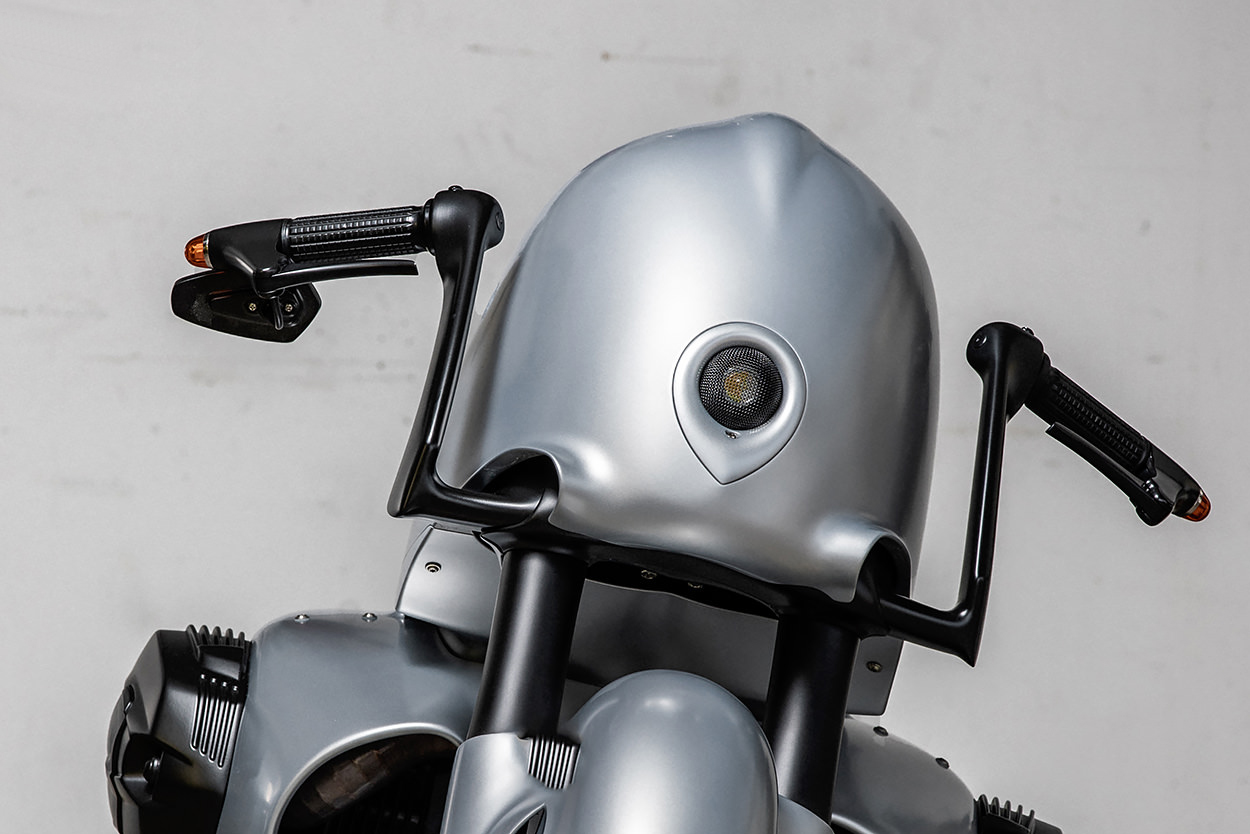 Equal consideration went into the control area. Wayne fabricated a pair of aluminum handlebars that clamp to the forks, effectively acting as raised clip-ons. The grips, bar-end turn signals and mirror are among the few off-the-shelf parts used here – but the reverse levers are custom, as is the internal throttle.

All the cabling and wiring runs inside the handlebars, with the brake and clutch master cylinders tucked away under the bodywork. Up top is a custom dashboard built around an Acewell speedo, with a few push buttons to perform basic functions. The ignition is keyless; a remote turns the bike on, and one of the buttons starts it. 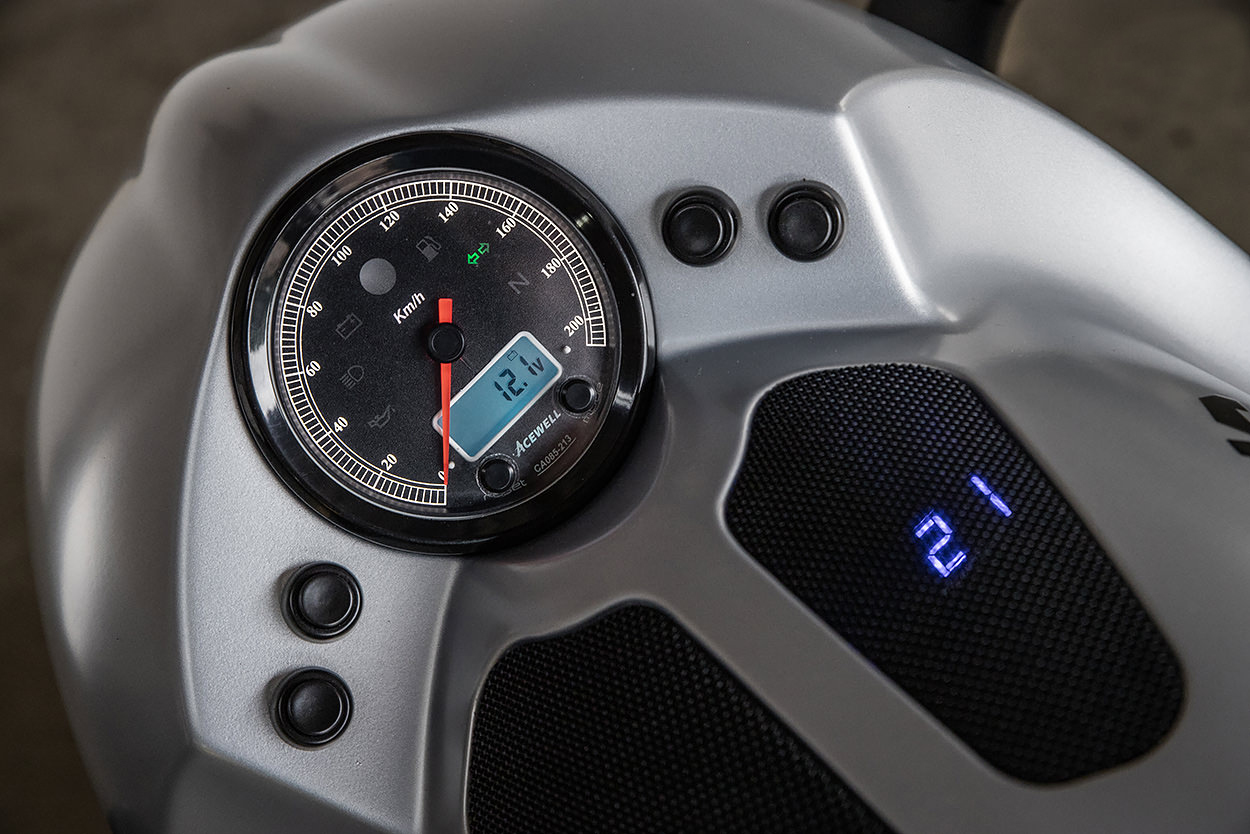 Dubbed ‘Storm,’ and wrapped in a slick matte silver finish by Auto Trust, FabMan’s retro-futuristic R nineT is both impressive and intriguing. And we’re not the only ones that have noticed; Wayne’s already had multiple requests for a kit, but says it’ll be too complex to reproduce without some serious funding. Also don’t forget to check 10 world’s fastest bikes. 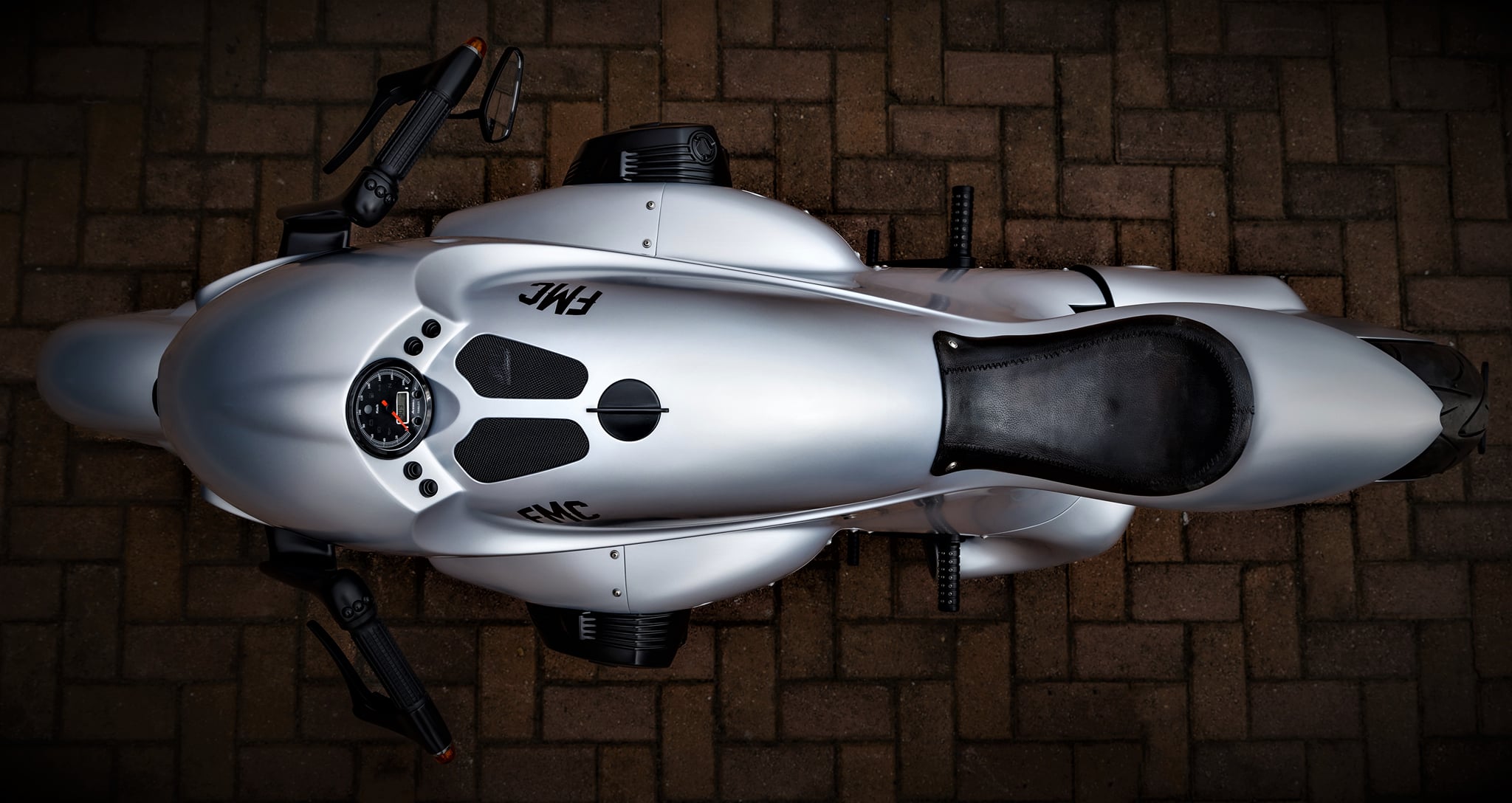 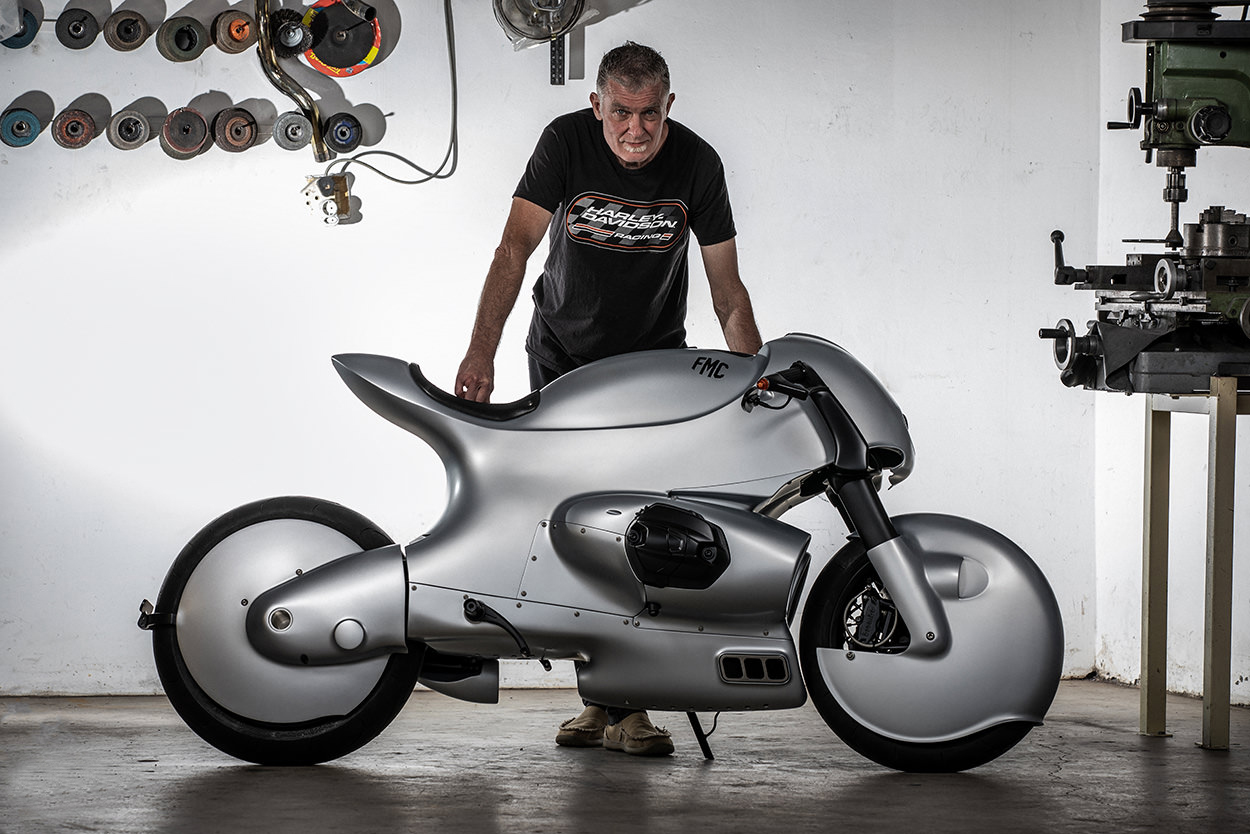